One of the smallest ASL modules (although made slightly larger with its 2nd edition due to the inclusion of an old Squad Leader board), Last Hurrah adds Allied Minor infantry and support weapons (but not guns or vehicles, which appear separately in Doomed Battalions).

It is also one of the less successful modules.  The lack of guns and vehicles meant that its scenarios were necessarily lacking in variety, and none of the scenarios have turned out to be classics, while one of them is considered one of the worst official ASL scenarios of all time (Piercing the Peel, which is very unbalanced).  Last Hurrah will not be reprinted; its components will be wrapped into an upcoming new edition of Doomed Battalions.

Update, February 2010:  As predicted, the components of The Last Hurrah were wrapped into the 3rd Edition of Doomed Battalions.  Some of the scenarios, including the above mentioned Piercing the Peel, have been revised for better balance. 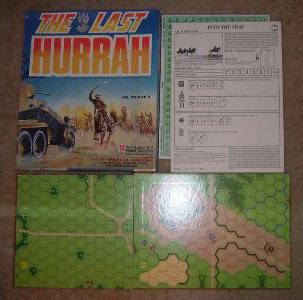