Leibstandarte Pack 5 (hereinafter LP5) is the latest iteration of a series of scenario packs that designer George Kelln began way back in 1998.  A decade and a half later, he is still designing and publishing scenarios centered around the 1st SS “Leibstandarte” Panzer Division.  Even this pack brings the Waffen SS division only to March 1944, leaving a huge number of potential scenario packs featuring this division left to go.  Doing this many scenario packs on an SS division may leave some ASLers with an uneasy feeling.  In any case, this one is done and out.

The scenarios (collectively) utilize boards 2, 3, 4, 5, 17, 18, 24, 33, 43, 44, 47, and x.  Almost all of the boards used in the scenario pack are old boards that existed before MMP took over ASL in 1998.  Many designers of scenario packs rush to use the latest boards available, if for no other reason than out of boredom with the older ones, but this pack bucks that trend.

The scenarios were clearly designed using Germanocentric source materials; no Soviet force is identified lower than the corps/army level and two scenarios actually only deign to identify the scenario force at the “Front” level (equivalent to a scenario card reading “Elements of Army Group Center”). The locations of the scenarios are typically Germanized versions of Russian names rather than English transliterations, so finding most of these locations will be a chore.

The Germans are on the attack in 3 of the scenarios, the Soviets in 5.  Two scenarios require ASLSK geoboard x.  The scenarios are a fairly even mix of small, medium, and large scenarios.  One scenario has OBA and one scenario uses Air Support.  There are no Night scenarios.

Many of the scenarios in the pack are inherently rather dicey (which is not necessarily good or bad but something of which players should be aware), often featuring immediate victory conditions highly dependent upon vehicular action (either exiting or in armor battles).  For example, in LSSAH34 (To the Cherkassy Pocket), the Germans can win immediately by accumulating 15 VP, which include exit VP and CVP.  This will make the Soviet player pretty conservative, as each of his 3 T-34s is worth 7 CVP each.  Increasing the diciness are a lot of high-powered leaders.  The 8 scenarios in the pack feature 9 leaders of 9-2 power or greater, as well as 11 armor leaders (!).

A lot of the scenarios feature Soviet exit victory conditions requiring the Soviets to exit a certain number of VP off the map.  Some of these have the appearance of shooting gallery scenarios.  For example, LSSAH36 (Führer’s Expectations) features 12 Soviet squads and 7 AFV against 6 German squads, 2 AT guns, and one Panther.  The Soviets win immediately by exiting 28 VP, so the Germans essentially just take shots at the Soviets, hoping to kill enough units to prevent a Soviet win.   LSSAH35 (Supreme Effort) is the same thing, just a bit bigger.  This scenario has 14 Soviets squads and 10 Shermans trying to exit 35 VP past 6 German squads, an 81mm mortar, and 4 StuG IIIGs (the Soviets also have to take 7 buildings in this scenario).  In both these scenarios, soft ground hinders vehicular movement and maneuver considerably.

LSSAH34 (To the Cherkassy Pocket) is a tournament-sized scenario that features simultaneous set-up and who moves first is determined randomly (although the VC make clear that, regardless of who moves first, the scenario is essentially a German attack).

The scenarios have elements common to George Kelln-designed scenarios, such as a very high SW-to-squad radio (as much as 1-2 or greater), and a fairly high vehicle to squad ratio.

Because the combatants are the same, many scenario elements are the same (such as soft ground), and a lot of the scenario situations seem somewhat similar to each other, the pack seems to lack a certain variety. 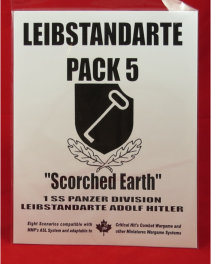