The maps for both Leningrad modules are attractive; Critical Hit’s late 2010s-early 2020s map artwork is generally good quality, except for a fair amount of its building artwork, but buildings are in short supply here, so it is not a problem.  Critical Hit has been unusually reticent about the contents for the Leningrad modules–reticent even for the normally opaque Critical Hit, but it appears that the Leningrad 1 map is formed by assembling 9 glossy 12″ x 18″ heavy paper/light cardstock map panels. Assembling so many such panels can be a pain, but most scenarios don’t use the whole map. One ASLer playing a monster scenario that uses both sets of Leningrad map panels claimed that it took him an hour just to set up the maps.

Leningrad 1 comes with 8 scenarios, including a monster scenario, LEN4 (Voroshilov’s Counter-Attack), which uses all the Leningrad 1 maps and takes the place of any campaign game.  Although there are a couple smaller scenarios, most of the scenarios are large or very large, and several have a great many AFVs, allowing some fairly large-scale early war armor clashes. In LEN2 (Human Wave), for example, the attacking Soviets have 24 AFVs, while the defending Germans themselves have 13. It is probable that just the attraction of large tin-can tank battles will cause some ASLers to pick up the Leningrad modules, despite Critical Hit’s reputation. 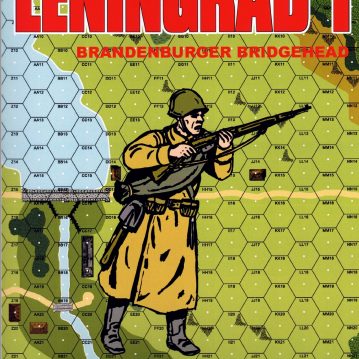