Contents:
Desperation Morale has not examined this product and cannot confirm claims of its contents. However, it appears to contain a historical map formed from 9 (?) 12" x 18" heavy cardstock/light paper map panels, 3 die-cut countersheets, and 9 scenarios.

The maps for both Leningrad modules are attractive; Critical Hit’s late 2010s-early 2020s map artwork is generally good quality, except for a fair amount of its building artwork, but buildings are in short supply here, so it is not a problem.  Critical Hit has been unusually reticent about the contents for the Leningrad modules–reticent even for the normally opaque Critical Hit, but it appears that the Leningrad 2 map is formed by assembling around 9 glossy 12″ x 18″ heavy paper/light cardstock map panels. Assembling so many such panels can be a pain, but most scenarios don’t use the whole map. One ASLer playing a monster scenario that uses both sets of Leningrad map panels claimed that it took him an hour just to set up the combined maps.

Leningrad 2 comes with 9 scenarios, including a monster scenario, LEN4 (Voroshilov’s Counter-Attack), which uses all the Leningrad 1 maps and takes the place of any campaign game, as well as a “bonus” scenario featuring Finnish troops that uses a Leningrad map but seem to take place elsewhere.  Aside from the two monster scenarios, the scenarios in Leningrad 2 are often smaller than those of Leningrad 1 and feature fewer large-scale AFV clashes. There are two monster scenarios.  One of them, LEN14 (Assaulting the Yurki Line), uses the entire Leningrad 2 map and features Germans on the attack with 58 squads, 34 AFVs and 24 guns, while the defending Soviets have 59 squads, 11 AFVS and 16 Guns.  The other, LEN11 (Thunder on the Luga) combines Leningrad 1 and Leningrad 2 (here are some [fuzzy] photos of this scenario and the counters required). It features 135 German squads, accompanied by 60 AFVs and 74 Guns, opposed by 128 Soviet squads with 17 AFVs and 20 Guns. 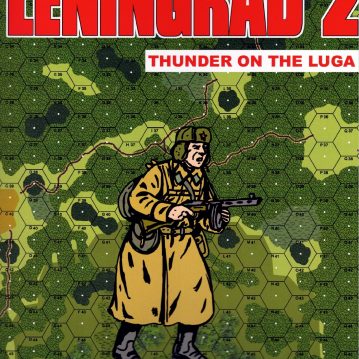