Maxim Gorki (hereinafter MG) is a Critical Hit historical module simulating one part of von Manstein’s Sevastopol campaign, the German assault on the Soviet fortress called Maxim Gorki I (there was also a Maxim Gorki II) in June 1942.  Designed by perennial Critical Hit crony Mark Porterfield, MG was one of those infamously long-in-the-works ASL modules that one wonders if the world will ever see.  As early as 2005, Critical Hit head Ray Tapio declared that MG had been “done for some time,” while in 2006 ASLer Dave Lamb, then a playtester and developer for Critical Hit, reported having a playtest copy.  Fast forward nine years to 2015 and the product has actually debuted.  Generally speaking, long gestation times are probably a better sign for Critical Hit than short gestation times, given the company’s demonstrated past tendency to rush stuff out.  No playtest credits are given, which is always a bad sign, but perhaps Dave Lamb and his crew at least did some early playtesting.

MG breaks new ground for ASL.  Previous official or third party ASL products have produced plenty of assaults on fortified positions, as well as Japanese fortified cave complexes, but nobody has previously published something so esoteric–and difficult–as an assault on an actual fort.  But that is exactly what Maxim Gorki was, a massive protected position, much of it below ground, designed to protect a battery of massive naval guns protecting the harbor of Sevastopol (and which could also be used landward). 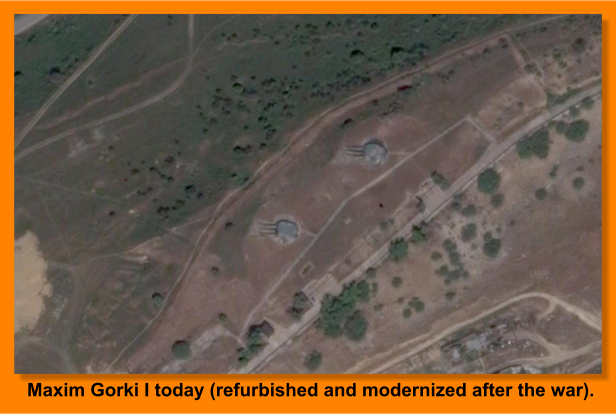 To simulate something like Maxim Gorki on ASL terms is an ambitious goal and there is no doubt that MG is an ambitious module.  It is also definitely a complex module, not for the faint of heart.  Although there are “only” 12 pages of rules, very little of them are filler.  They are rules that must be absorbed.  One cannot casually break out MG and “give it a go.”  On the other hand, MG offers the chance to provide a unique ASL gaming experience.

As with any HASL, a number of the rules deal with terrain features, many of which are relatively simple, such as perimeter wire or map-printed trenches.  MG also features “concrete trenches,” as well as hillside roads, the latter of which may not be very intuitive.  One key piece of terrain is the Bastion Observation Bunker, happily acronymed BOB, which is where the fort’s massive stereoscopic range-finding equipment was located.  It is represented both on-map and with a counter.  So too are blockhouses, which are a sort of two-story bunker.

However, by far the most complicated terrain rules are those for Maxim Gorki itself.  On the map, this fort appears as only a three-hex structure.  However, this really only represents the exterior of the fort, while MG also accounts for the interior.  This is accomplished through the use of a special play-aid mapping out the underground Maxim Gorki complex, as well as a set of accompanying rules that provide for combat within the fort itself.  To say these rules are unique would be an understatement.  The closest ASL has come to such rules previously are with the rules for cave complexes (in which no enemy movement or combat is allowed) and the unusual Partisan scenario Subterranean Quarry.  MG far surpasses these crude attempts, providing rules for tunnels, corridors, blast doors, breaches, ammo magazines, turrets, and more.  What is notable is that the scale of fighting within these corridors is much different from that of the world outside.  Everybody is much closer to each other.  As a result, close combat can occur between units in ADJACENT hexes, while in-hex CC is hand-to-hand.  Players must be careful with their flamethrowers, because if the area is not roomy enough, blowback can occur.  You can perhaps imagine what a thrown DC could do.  Many players will find this unique sort of fighting to be very interesting; it certainly will provide a very different feel than standard ASL combat.  However, the module only seems to provide a couple of opportunities to engage in this sort of combat.

MG also provides extensive and complicated rules for the massive 300mm naval guns at Maxim Gorki and their complicated turrets and embrasures.  The guns are unusual in that each gun turret (which holds two separate guns) is considered a separate location–and each turret is manned by two crews (for a total of four for the whole shebang).

More rules appear for the German’s own superheavy artillery, its massive siege weaponry, which is so heavy that scenarios specify the number of shots a gun is allowed to take.  These guns are all located offboard, so the rules here modify OBA rules with provisions for things such as extended blast areas and craters.  Other rules provide for German gasoline bombs and heavy demo charges, as well as a variety of remote controlled explosive thingies (which have appeared in prior Critical Hit products and are largely cribbed from earlier Kinetic Energy rules).  “Optional rules,” for the masochistic, include “bayonet charges” (also cribbed from Kinetic Energy and which probably never occurred during the assault on Maxim Gorki) and “pilot leaders,” which ASL needs about as much as it needs mandatory paper cuts.

Overall, the rules, though complex, are interesting and mostly intuitive.  It is not clear, however, how rigorously they have been put to the interpretation test; even a casual reading of the rules seems to bring out some questions about how certain things are handled.  Players must expect to encounter some ambiguities as they attempt to play the game, and ought to periodically check CH’s message board in search of errata or clarifications.  The alternative would be to wait for the inevitable-as-death-and-taxes 2nd edition of Maxim Gorki in the hopes that it would incorporate errata and clarifications.

MG comes with a butt-load of counters but, as is usual for Critical Hit these days, many are unnecessary and simply add cost to the module.  However, there are a fair number of new counters, including counters for blockhouses, craters, BOB, siege gun OBA, specialized aircraft counters, remote control bomby things, assault engineers (a la Valor of the Guards), pilot leaders (ughie ugh ugh), gasoline bombs and heavy DCs, forward observers, and Soviet naval troops.  The latter are 5-3-8 squads (which reduce to 4-2-6 squads).  The die-cutting is very thick, which means that counters will have a tendency to fall from the counter trees and become strays–be accordingly careful.

MG comes with 12 scenarios, but no campaign game (even though one was allegedly originally provided).  Most of the scenarios use only a small–sometimes very small–portion of the map.  As one might suspect, the game is dominated in many respects by the “big toys” available:

Of the 12 scenarios, 3 are small while 3 more are medium in size.  The other 6 range in size from large to very large, giving players a lot of troops even if not always a lot of map area.  For Air Support and OBA, see above.  Two scenarios use the Night Rules.  One scenario, MG12 (Into the Bowels of Hell) is clearly designed as a “fight in the fortress” scenario; one, perhaps two others might also realistically provide such an opportunity, but perhaps none beyond that.  Four scenarios provide partially purchasable orders of battle for both players, as does, more expansively, the massive scenario that substitutes for a campaign game.

MG provides full Reinforcement Group purchase charts for both Soviets and Germans, just as a campaign game would, but has no campaign game to accompany it, just MG9 (Maxim Effort), the monster scenario.  This scenario, 16 turns long, features 55 German squads (including 14 8-3-8 assault engineer squads), plus whatever additional units it purchases from the Reinforcement Group chart, against 60 Soviet squads (plus their own purchases) and an entire panoply of guns, SW, and fortifications.  Short on AFVs, it clearly will not be short on carnage.

The scenarios all take place on the Maxim Gorky map (unless units are “in” the fort), which is formed from 4 12″ x 18″ light cardstock/heavy paper glossy map panels, which must be fitted together to form the map area.  Many players do not like fitting maps together like this (though with only 4 panels, it is much easier than with some other CH products), while others will not like the glare provided by the glossy surface.  On the other hand, the map’s colors are crisp and clear.  The map is dominated by the fortified hill position on which both the Maxim Gorki guns and BOB were located.  It is an attractive map.

Overall, Maxim Gorki looks like an interesting experiment, promising to provide a unique playing experience for advanced ASLers.  It is one of the more intriguing recent Critical Hit offerings–though the complex rules will certainly be a test of Critical Hit’s shaky reputation for getting complex rules correct on the first go-round.  Purchasers will also be paying a lot for the novelty value:  $129.95 for a small-map module with no campaign game.  For that amount of money, CH better have gotten it right. 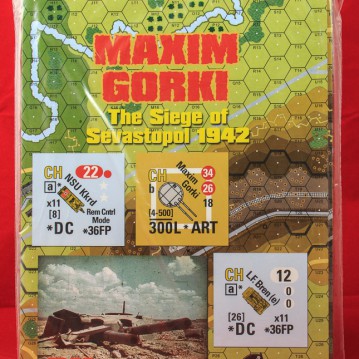