After an unexpectedly lengthy delay, the Southern California ASL Club released a third scenario pack in early 2008, some three and a half years afer their previous one.  Like its predecessors, Melee Pack III is a smallish scenario pack that focuses on tournament-playable scenarios.  The scenarios–designed by eight different people–are printed on thick cardstock in color, using VASL graphics for counter and map art (somewhat dated by 2014 standards).  Unlike its predecessors, it does not include any scenario play aid cards, which is no real loss, as the play aids did not seem to have been used much by players.

The seven scenarios represent a mix of actions.  Two are set in Burma (one in 1942, featuring British and Japanese, and the other in 1944 with Americans and Japanese), one in France 1945, one in Norway in 1944 (a German-Soviet scenario), and the rest are set in the Soviet Union (1941, 1942, 1943).  There is still a hint of the “choose your own OB” options that dominated the first Melee Pack in some of the scenarios.

The smallest scenario is the 4 1/2 turn MP13 (The Blue House), which uses a single DASL board and features 6 American squads against 3 1/2 Waffen SS squads.  Most of the other scenarios are small as well, though not that tiny.  The meatiest scenario is probably MP16 (Power Struggle), a snowy light urban action pitting 17 Soviet squads and 3 T-34/85s against 10 German squads and two Guns.  The scenario has an interesting victory condition; the Soviet player can win by successfully shutting off the power in the Power Station.

One scenario features OBA (with pre-set accuracy rolls that vary according to the turn), but in general, the scenarios are SSR-light.  One interesting exception is MP18 (Marsh Madness) has one interesting SSR:  prior to set up, the Soviet player decides where to place three Brush overlays (in addition, his entire force sets up HIP).

The best scenario is probably a fast little PTO scenario, MP17 (Bagging Burcorps), but most of the scenarios are worth trying, except the unbalanced MP14 (Stubborn Ferdinand).

The scenarios are likely to see a fair amount of tournament play, given their size and subject matter. 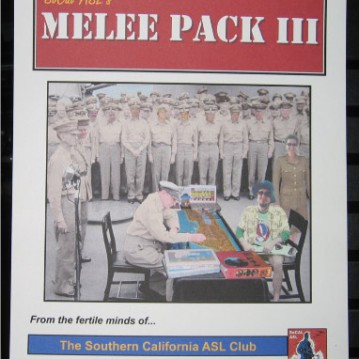