Operation Uranus is a scenario/map pack published by Critical Hit with scenarios set around Stalingrad during the Soviet breakout in November 1942.

Though one might think from the product packaging that it is a historical module, it is not.  It contains no historical map, only a set of large nonstandard geoboards (12″ x 18″, the standard Critical Hit map panel size; using this size means Critical Hit doesn’t have to worry about cutting).

The geoboards, featuring basic “winterized” artwork (i.e., level 0 terrain is grey-white, representing snow, rather than green), ostensibly depict representative steppe-like terrain in the southern Soviet Union.  The edges of the geoboard do not physically match, so it looks as if each geoboard will have to slightly overlap any other geoboards. Some of the geoboards feature Slopes.

The artwork is adequate.

Eight scenarios are provided with Operation Uranus; given recent Critical Hit standards, it is unlikely they received playtesting. The Soviet breakthrough occurred against Romanian troops and most of the scenarios here are Soviet vs. Romanian actions, with Germans guest-starring in a couple of them.

Some East Front ASL enthusiasts may be tempted to purchase this product, but as always with this manufacturer, caveat emptor. 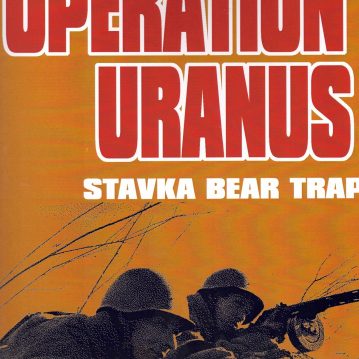