Happily, the third Operations special issue returned to providing ASL content, in the form of a historical ASL map and a handful of scenarios that use it.

Interestingly, this Web site and its readers played a (small but interesting) role in the history of this ASL content, which dates all the way back to the turn of the century and Operation Watchtower.  When this project on Guadalcanal was originally designed, it included two maps, the Edson’s Ridge map that appears in the final product and a second map, the Hell’s Corner map, which depicts the coastal environs of the Matanikau River on Guadalcanal, where some sharp fighting took place during the period August-October 1942.  Though the HC map did not have a campaign game associated with it, it did have quite a few scenarios (around seven) designed for use with it.

However, due primarily to miscommunications between designer and MMP, MMP only received four of the HC scenarios and decided that it was not worth the additional expense to include the second map for only a few scenarios and no campaign game.  Three of the scenarios eventually were converted into geomorphic map scenarios:  HS1 (First Matanikau), HS8 (Bailey’s Demise), and HS11 (The Sand Spit).  The map itself went into MMP’s “vaults” and became forgotten.  The ASL audience was unaware even of its existence.

Fast-forward some 6 years to early 2007.  The World of ASL compendium (i.e., what you are reading) was attracting a lot of attention in the ASL community, and, as a result, many people were coming forward to volunteer additional information about various ASL products.  This sort of information led to the rediscovery of the “lost” OWT countersheet and, thanks to designer Nadir El-Farra, the news of the existence of the Hell’s Corner map.  In March 2007, Desperation Morale revealed this news to the ASL audience for the first time.  The Hell’s Corner map immediately attracted attention and interest, with a number of people enthusiastically asking on the Consimworld Web forums that MMP publish it in some form, such as in an ASL Journal.  MMP’s initial response was distinctly unenthusiastic.

Though the Hell’s Corner revelations did not cause MMP to publish the map and accompanying scenarios at that time, they planted a seed in the ASL world and also revealed to MMP that ASLers really would be interested in the map.

After Chas Argent joined MMP to shepherd development of ASL products, the Hell’s Corner map was finally revived, with an eye towards including it in one of Operation’s special issues.  The revived Hell’s Corner comes with five scenarios:  three of the original four received by MMP, plus two additional ones (apparently unrelated to the other original Hell’s Corner draft scenarios that MMP never saw).

Thus the ASL/ASLSK content of Operations Special Issue #3 is:

The Hell’s Corner map is a very attractive and nicely done map (by Charlie Kibler), better looking than the map that appeared in Operation Watchtower.  It has one drawback and one potential drawback, though.  The drawback is that it is printed on glossy paper (though at least the paper seems somewhat sturdy), which is disliked by many ASLers both for glare and durability reasons.

The potential drawback is that the Hell’s Corner map has unusually small hex sizes, slightly smaller than hexes on geomorphic maps (10 geomorphic map hexes are about 11 Hell’s Corner map hexes).  In general, this is not likely to be a true problem in practice, because only one of the Hell’s Corner scenarios has any guns or vehicles (which, as 5/8″ counters, take up more space).  Thus for four of the scenarios it is not likely to have much of an impact at all.  The fifth scenario, though, HC5 (The Sand Spit), features 10 vehicles and 2 guns (in addition to 6 fortification/entrenchment counters), and it is possible that in this scenario players might feel a bit squeezed for space.

The 5 scenarios are a mix of small, medium and large scenarios.  Three of them take place, more or less, in the same area (the mouth of the Matanikau River), while the other two take place further out (leaving a good chunk of the map still unused).  Two scenarios use Night rules; one of these also has OBA.

As mentioned, three of the scenarios previously appeared as geo-board scenarios in Operation Watchtower.  HC1 (First Matanikau) has essentially the same SSR (taking into account the map differences).  The VC are very slightly changed, and the OBs of both sides are changed (the Japanese get two extra squads, an extra LMG, and two additional concealment counters; the USMC get two extra squads, a leader demotion, and have some MMG undismantled).

HC2 (Bailey’s Demise) has slightly changed VC and the OBs of both sides are changed (the Japanese have two squads promoted to elite, get their SAN raised from 3 to 4, and get some foxholes; the USMC get an extra 8-0 leader).  In addition, there are some noteworthy SSR changes.  In the new version, only American leaders are Stealthy (as opposed to all Americans), Kindling is allowed, Boresighting is allowed, and the Japanese may use the bridge on Turn 1.

HC5 (The Sand Spit) essentially keeps its predecessor’s VC, and also maintains the earlier Japanese OB.  However, the USMC OB is reduced by a half squad, by a halving of its minefield factors, and by a reduction of Wire counters from 5 to 3.  An SSR change, though, bumps the Marines’ Majority Squad Type from Normal to Stealthy.

Of the two included ASLSK scenarios, one of them is noteworthy as an attempt to bring Valor of the Guards to ASLSK.  This large, meaty scenario (and very counter dense considering it takes place on one half-mapboad), designed by VotG designer Tom Morin, may be the most complex ASLSK scenario released to date.    It features 17 German squads, 2 AFVs, and tons of leaders and SW attacking 20 Soviet squads, with one gun, two AFVs, and its own array of leaders and weapons.  SSRs attempt to simulate Soviet NKVD troops, rubble, shellholes, dug-in AFVs, commissars, snipers, and Stukas!

Overall, the ASL/ASLSK content of the magazine seems quite good and certainly an improvement over the previous issue. 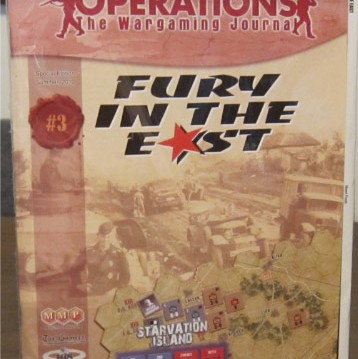