In December 2014, attendees at the annual Albany, New York, ASL tournament allegedly received free copies of a mini-scenario pack from Critical Hit, dubbed Purple Heart or the Purple Heart Pack (hereinafter PH).  This came about presumably because of long ties between CH proprietor Ray Tapio and some of the people behind the Albany tournament.

For Albany attendees, why look a gift horse in the mouth?  Free stuff is free stuff.

Others, considering purchasing the project, may wish to know what they would be getting for their money, especially since PH is priced at $39.95, though it is comparable in components to an MMP Winter Offensive “bonus” pack, which goes for around $12, or less than 1/3 of the price of PH.

PH comes with four scenarios and 2 unmounted (heavy paper) 11″ x 16″ Gary Fortenberry style geoboards (97a, 99a).  Both geoboards come untrimmed, which means that players must use scissors, a razor blade, a box cutter, a rotary cutter or some other device to trim the edges off the two maps before they can be used.  In other words, the maps are more like map kits than standard geoboards.

The two geoboards, one of which has a river and the other of which depicts a crossroads hamlet and a patch of woods, are winterized–i.e., the map graphics depict snow covered terrain.  Critical Hit has essentially two styles of winterized map graphics:  1) an attractive style done by an outside artist and used for historical maps, and 2) a less attractive but adequate set of graphics used for winterized geoboards.  PH has the latter, adequate style.  The most attractive feature in this style are water obstacles, such as the river.  The least attractive features are the roads, which look as if they were spray-painted on top of the snow.  The boards use white center hex-dots even on hexes covered in white snow, which is not very user friendly.  The other problem is that the building graphics suffer from the same problem that all recent Critical Hit geoboard buildings have, which is that any building not situated in the hex perfectly horizontally or vertically suffers from jagged and pixelated graphics, like a crude video game.  It is very unattractive, but the effect is lessened on these two particular geoboards because they don’t have many buildings and most of the ones they do have are oriented vertically or horizontally.

The four scenarios are all Battle of the Bulge scenarios, which account for the winterized graphics.  None of the four scenarios are original scenarios.  All of them are recycled European ASL scenarios that had their original maps replaced with one or both of the new geoboards.  There is no indication that they were re-playtested.

For the non-Albany attendee, then, one must pay $40 to get 2 finish-them-yourself geoboards and 4 recycled scenarios.  It is not a great value for the money. 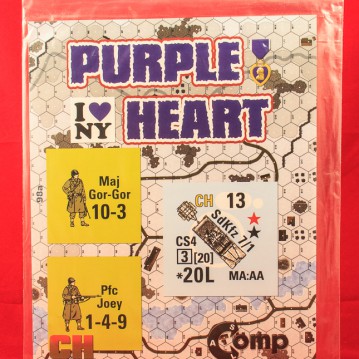