The latest Rally Point–the series of themed scenario packs published irregularly by Evan Sherry and his Tampa crew of ASLers–ends a gap of over a year without an ASL product from the Tampa ASL Group, thanks to interference from the coronavirus, which is rather inimical to face-to-face playtesting. The theme for Rally Point 18 is the French Army, a not-very-surprising choice, given the Tampa tendency to design Rally Points recently released ASL core modules–in this case, the re-release of Croix de Guerre.

During World War II, the French fought in Norway, France (1940), North Africa, Syria, Sub-Saharan Africa, Madagascar, Italy, Corsica, Elba, France (1944-45), Indochina, and Germany.  Their armed forces included the traditional French Army, the colonial forces (including the French Foreign Legion), the Vichy French Army, the Milice, the FFI, French volunteers in the service of Nazi Germany, and the Free French Army. However, ASLers will see little of this vast range reflected in RP18.  Fully 7 of the 10 scenarios in the pack are France 1940 scenarios. The remaining three are set in Madagascar, North Africa, and France 1944.  In part this may because of the Tampa ASL Group’s tendency to focus on actions with AFVs.

The scenarios tend towards the large in size, primarily because some are vehicle-heavy, with six large, two medium, and two small scenarios in the mix. Two scenarios employ OBA while one scenario uses Air Support rules; no scenarios use the Night rules. In general, the scenarios are SSR light, with fully four of the scenarios having only 1 or 2 SSRs.  None of the SSRs are complicated; players can jump right in–assuming they know where all their obscure French vehicles are, including FT-17s and trucks.  One scenario uses 8 B1-bis tanks, so players may have to beg or borrow a few.

The focus on France 1940 does provide for the possibility of tin can actions.  However, of the 7 France 1940 scenarios, one does not have AFVs, three have French AFVs only, one has German AFVs only, and only two have French and German AFVs taking shots at each other. However, the three scenarios with FT-17s are nice, as it is a real challenge to be effective with what, on paper, are certainly the worst AFVs in ASL (though they are also your humble author’s favorite AFV in ASL).

FT-17s are featured in one of the more interesting scenarios in the pack, RPT179 (Operation Terminal) which simulates the failed American attempt at a coup de main to take the port of Algiers from the Vichy French during Operation Torch.  A smallish but well-led American force has to take multi-hex buildings and hold them against a Vichy counterattack featuring 6 FT-17s and 2 armored cars.

The one Free French scenario will at least give ASLers an opportunity to break out their new Free French infantry counters (though they will, alas, still have to use other country’s AFV counters). The scenario does not feature the French 1st Army (they are wholly absent from this pack), but rather the French 2nd Armored Division under Leclerc, taking on one of the Panzer Brigades hastily thrown into the fight by the Germans in the late summer and early fall of 1944. The action pits a couple of Panthers, albeit with inexperienced crews, against Leclerc’s Shermans.

Most of the scenarios in Rally Point 18 look interesting, but fact that the pack is dominated by 1940 actions is a missed opportunity to showcase the variety of actions the French were involved with in World War II; the Madagascar scenario is the only “exotic” scenario in the mix. 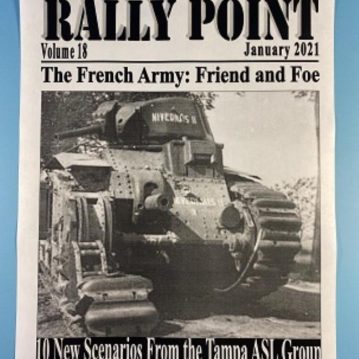