Russian Rarities 1 (RR1) is the first of an ostensible series of packs with the theme of Soviet AFVs not represented in the official countermix.  In practical terms, RR1 is just an East Front scenario/map pack with some counters.  Mark Porterfield is listed as the designer.

Like many Critical Hit products, RR1 is a mix of the interesting and the sloppy.  It comes in a “folder,” not a box or a ziplock, and as the folder is totally useless for storing the product, one must purchase a ziplock large enough to contain it (or find some other storage method).  The “rarities” are described in 8-pages of Chapter H-style rules.  The vehicle entries–at least for the AFVs this author was familiar with–seemed reasonably accurate, but at least one of the entries appears simply to have been cribbed from Wikipedia.  The rules pages are in full color and are considerably more attractive than older Critical Hit rules pages have been.  They are hole-punched for binder inclusion.

The countermix is also padded by providing more of many of these vehicles than are actually warranted.  Perhaps the most egregious of this is the SU-100Y, an assault gun with a 130mm gun.  This vehicle was never put into production and only a single prototype was ever produced (which never saw combat).  However, six of these non-existent vehicles appear in the RR1 countermix.  What is any ASL player going to do with six counters representing an AFV model that never saw combat or even production?

Even under the best of circumstances, doing a “rare vehicles” project for ASL is hard.  Finding oddball vehicles is not the hard part, though.  What is hard is finding oddball vehicles for which one can actually design scenarios.  Otherwise, there is no point in having counters that will never be used, except possibly in some sort of weird “design your own” fantasy situation.  A number of the vehicles in RR1 fail to pass this test.  For example, six counters for the PPG tankette are provided.  Only 100 PPG were ever produced, which certainly makes this vehicle rare.  However, they were intended for use in the Winter War, but that conflict ended before they could be shipped to the front and as a result never saw combat.  Consequently, they are pretty useless, as far as the ASL player is concerned.  What this means is that between the trucks and tractors on the one hand and the never-saw-combat vehicles on the other hand, the useful number of counters in RR1 is far less than it would seem at first glance.

RR1 also comes with what one might charitably describe as geoboards, though they really constitute a sort of cheap do-it-yourself “geoboard kit.”  Instead of actually including mounted or ASLSK-style unmounted geoboards, Critical Hit instead threw in a bunch of half-geoboards printed on 9″ x 12″ heavy paper/light cardstock (of the same consistency as an overlay sheet).  This means, first of all, that these maps are not even cardboard, just paper.  Second, they have to be cut out and assembled.  Each half-board contains a substantial white strip around it on all sides, so players have to get out scissors or some sort of rotary cutter and actually trim the sides of each of the 14 sheets of paper on which the maps are printed.  Only then will the player have a set of flimsy half-maps (that probably should be laminated to protect them).  Unfortunately, the problem does not stop there.  The maps are not actually printed correctly.  When one measures the map-halves lengthwise, they come out the correct length:  11 inches.  Measured from side to side, the map depictions ought to be 8 inches–but they are not (at least not the several test-measured).  Sidewise, they are short by 1/8″, which means that the hexes on an official ASL board will not line up correctly when placed next to one of these half-maps.  This is really inexcusable, because it is no secret that ASL geoboards measure 8″ from side to side and it is easy to measure a prototype.

The error would have been more serious and egregious if it were the long side that was screwed up, but this is bad enough.  Combined with the “assemble it yourself” nature of the maps, the fact that the maps are also wrongly-sized is enough on its own to get a “DO NOT PURCHASE” warning from Desperation Morale.  Both of these things–the cost cutting and the shoddy workmanship–are examples of Critical Hit’s perennial indifference to quality control.

Other than that, Mrs. Lincoln, how did you like the play?  Well, board RR1 is a non-descript, rather open board with scattered orchards, small patches of woods, and a few one-level hill-lets.  Its most distinguishing feature is a lengthy stream that runs pretty much the length of the whole board, throwing off a couple of gullies along the way.  That’s an interesting idea and might have made the map worthwhile–were it printed as it should have been.  Board RR2 is a slightly re-worked version of official board 19 (a wide-open crossroads board) and thus not very interesting.  In fact, Board RR2 is actually mistakenly called “board x19” on one scenario card (this may mean that RR1 and RR3 are also derivative of official maps, but no attempt was made by this author to investigate).  RR3 is mostly just grain fields, with a few orchard hexes and farm buildings throw in.

The next board is W6, which is a winterized shoreline board described by Critical Hit as a “Lake Onega shoreline board.”  (Lake Onega is the large lake near Leningrad that played an important role in the battle for that city.)  It contains adequate but not exciting winterized graphics.  Boards W7, W8, and W9 are the most puzzling.  They are all “frozen lake” boards, meaning that they are nothing but ice.  On each board there are a few hexes or hexsides which contain some sort of feature; these are only described on a scenario card, not in the rules.  It is not clear why simple water overlays could not be used instead of these special boards.  The usefulness of three entire frozen lake geoboards is rather open to question, given how seldom they could ever be used.

Of the 8 scenarios included with RR1, 5 use one or more of the included boards.  RR1 appears in 2, RR2 appears in 3, RR3 appears in 3, and the other 4 boards all appear in only one scenario,  RR#6 (Ice Racers), which, as might be expected, involves aerosleds.  Luckily, none of these scenarios require any of these boards to mate with official boards along the narrow ends.

All of the scenarios are East Front scenarios.  Finns appear twice, Romanians once, while the Germans are the villains in the others.  The scenario involving Romanians is RR#1 (Terror Tanks of Odessa), which feature the much-requested NI “terror” tanks, which were a bunch of old tractors that the Soviets defending Odessa armored and equipped with weaponry to use against the Romanian attackers, who had few means to defend themselves against AFVs.  Unfortunately, the tanks do not cause terror in the scenario; an SSR does, essentially by forcing Romanians to run away (or be broken).  RR#2 (Combat Test), one of the Finnish scenarios, has one of the more interesting situations.  A strong Soviet combined arms force (with no fewer than 6 “supertanks” like the T-28) must attack a lightly-manned-but-heavily-fortified Finnish position in conditions of extreme winter.  A couple of the other scenarios also look like they might be worth trying, at first glance.  It should be noted, however, that no playtesters are mentioned.  Instead, the product states that “the game-play and development aspects” is “the work of CH staff.”  This is a bit mysterious, as the only known current “CH staff” are Mr. and Mrs. Tapio.

The scenarios are a pretty even spread of small, medium, and large scenarios (though none are “very large”).  Some are rather vehicle-heavy, which is not surprising given the theme.  Two scenarios have Air Support, while two use OBA.  One scenario, RR#7 (New Enemy), is all-armor, pitting 4 Tigers vs. 6 IS-1s.

Were it not for all the problems with the maps, this would be an okay product, and one that East Front and armor junkies might want to acquire.  The map issues make it much less desirable.  So too does the price, which is an outrageous $89.95 at present.  Ninety bucks for 1 1/2 countersheets, eight scenarios, and a bunch of misprinted do-it-yourself paper geoboards is pretty ridiculous.  If you ever see this for $40 or less, it might be worth considering, if you can get past the map issue (or if a future version corrects the map).  Otherwise, this is a Do Not Buy.

2nd Edition (Red Rarities I) comments:  In 2018, Critical Hit released Russian Rarities I as Red Rarities I with the exact same contents–right down to the problematic geoboards–with the exception that the Soviet counters are now presented in Critical Hit’s variant red Soviet color.  Critical Hit claims it comes with 11 boards but photos of the contents show only the original 7.

Critical Hit did offer a “RED Russian Rarities Upgrade Set” for $29.95, the only components of which were the 264 Red counters–making them among the most expensive ASL counters out there. 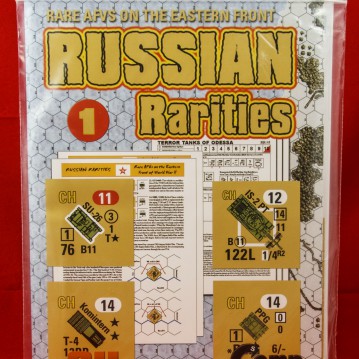