There is a movie production company called The Asylum that is infamous for producing what have come to be called “mockbusters.”  Essentially, Asylum targets an upcoming blockbuster movie, then quickly produces a cheap, rip-off version of that movie designed to be released straight-to-video at around the time of the blockbuster’s release, in order parasitically to capitalize on the success of the big movie.  So, when the movie Transformers debuted, Asylum was right there with Transmorphers.  To capitalize on The Da Vinci Code, Asylum put out The Da Vinci Treasure.  And so on, ad infinitum.  Clever and deplorable at the same time.

In the ASL world, Critical Hit occasionally performs the same function, capitalizing on the long playtesting and development times that many major ASL projects have.  It is in this context that Critical Hit’s Sealed Fate is best understood, as a hasty release seemingly designed to anticipate and undercut the release of a major project dealing with the 1939 Poland campaign by Bounding Fire Productions.  Clever and deplorable at the same time.

Though Bounding Fire Production’s upcoming Poland in Flames will come with a great many scenarios, Sealed Fate (hereinafter SF) comes with a meager 8 scenarios–and not originals at that. At least 7 of the 8 scenarios in Sealed Fate are actually cannibalized retreads from previous Critical Hit products or other products acquired by Critical Hit:

To make matters worse, the scenarios are not only not original scenarios, but all of them have had their maps swapped out for “new” Critical Hit maps–though there is no indication that any of the scenarios were re-playtested.  Play at your own risk.

The maps themselves are really only map kits.  Each is ostensibly an 11″ x 16″ unmounted (heavy paper, not as thick as official geoboards) Gary Fortenberry-style geoboard (J, K, L) featuring rural terrain and farmland.  However, Critical Hit never bothered to trim these boards, which means there is extra paper all around each map that has to be trimmed off with scissors, a razor blade, a box cutter or rotary cutter or some other implement.  In other words, you have to make the maps yourself–and don’t screw up.  If that weren’t enough, the map graphics contain the patented Critical Hit Building Screw Up, which affects any building on the map that is oriented in any way other than purely vertically or horizontally.  Affected buildings appear on the map with jagged, pixelated edges as if they were from an old computer game.  The amount of the effect can vary depending on the building, but is often quite crude and unattractive.

The counters are pretty much duplicates of existing Polish and German counters, except that the Allied Minor color for the Polish counters is so muted that it actually resembles the blue of the German counters.  The German counters include such incredibly exciting counters as Opel Blitz trucks (on the principle, presumably, that one cannot have enough truck counters).  There is also a counter for a German warship, which doesn’t appear to be used in this product (the rules warn that there are counters irrelevant to this product included).  Largely, the counters are just added expense.

Just to add insult to injury, Critical Hit has priced this exploitative product at the amazingly ballsy price of $99.95.  Yes, you read that right, a hundred bucks for eight re-tread scenarios and 3 do-it-yourself maps.  Basically, if you ignore the CONSUMER ALERT and purchase this product, your own fate is sealed. 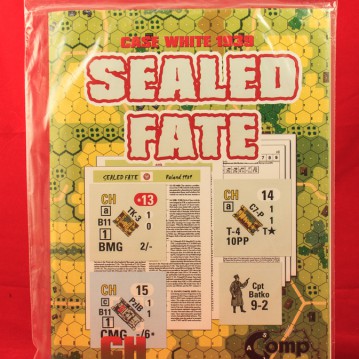