St. Lo is a Critical Hit historical module that depicts fighting in Normandy between Americans and Germans in June-July 1944 near the town of St. Lo, including the fiercely-contested battles for Hill 192 and “Purple Heart Draw.”  This is a subject that was covered by Lone Canuck Publishing some years ago in a product called Purple Heart Draw, a fact that may or may not be relevant to the later appearance of St. Lo.

The map for St. Lo is credited to Larry Winslow, who has done a lot of map work for Critical Hit, while the designer remains uncredited.  In many such instances, this means the designer is Critical Hit’s Ray Tapio, which may well be the case here.  The notion is strengthened by the fact that the St. Lo rules are almost all cobbled together from rules that have appeared in previous Critical Hit products.  No playtesters at all are credited, which potential purchasers should think carefully about before proceeding any further.

The map is the main selling point of most historical modules; the map in St. Lo consists of 4 overlapping 12″ x 18″ glossy map panels made of light cardstock or heavy paper, which must be mated together to form the playing area.  Though the gloss is irritating because of reflective glare, it does make colors stand out more, which in this case is needed, as the map consists mostly of dark-hued shades of green. The map artwork is typical of Critical Hit maps of this period:  far improved from the maps of previous eras but still sporting irritating inconsistencies and flaws, such as the poorly rendered bitmaps that comprise most of the buildings on the map. The artwork is all essentially off the rack, with no unique buildings created or new terrain types provided.

The map contains five different levels (six, if streams are included) and is heavily hedgerowed and equally heavily full of slopes.  The terrain is a typically Normandy melange of fields, orchards, patches of woods, and hamlets.

As a result, the rules spend virtually no space discussing terrain. Indeed, the game could almost be played without the rules, as most of the St. Lo rules consist of various generic or generic Normandy rules that have appeared in previous ASL modules (and some of which were “borrowed” from products from other third party publishers).  These include Bayonet Charges, “Slope Light” rules, Handi Taalkies, Bangalore Torpedoes, on-board Panzerfausts, Concrete Armor, and the ubiquitous “Optional Cargo Trailers,” which Critical Hit persists in thinking that somebody out there likes.  Most of the rules are actually fairly unrelated to the specific circumstances of St. Lo and can be considered pure chrome.

Similarly unnecessary are almost all of the counters provided in St. Lo.  The product comes with two sheets of 1/2″ counters (280 counters per sheet) and two half-sheets of 5/8″ counters (168 total).  The vast majority of these are duplicates of already existing counters.  There are only a few exceptions, such as five Panzerfaust counters, a few Abwehr Flammenwerfer or emplaced flamethrowers (which are neither explained in the rules or used in the product), some Bangalore torpedoes, and the aforementioned cargo trailers, cursed may be their name. What this means, in practice, is this product costs more (and it costs a lot, remember) because players are buying counters they already own.

The U.S. counters do have an additional distinction worth mentioning. They are not rendered in the standard ASL American Green but rather all of them appear with an alternative Olive Drab color scheme.  Critical Hit introduced this color scheme in 2016 and has been using it for many of its products featuring Americans in what appears to be its latest wave of product re-releases with different names and cosmetic or minor changes in order to get people to buy them all over again.

Various shades of Olive Drab are a common choice for wargame artists to use to depict Americans, insofar as their uniforms and vehicles tended to use Olive Drab.  However, the particular version of Olive Drab that Critical Hit chose is a very dark olive drab, as can be seen.  Critical Hit also chose to do the counter artwork in black, with the result that the St. Lo American counters are rendered in black on dark green, which is not a particularly great color combination for visibility, especially in less than perfect lighting conditions.

This dark version of Olive Drab, it should be noted, is a very acceptable wargame counter color and many people like it.  However, it is common for publishers who use dark shades of Olive Drab as their counter background color to use white, not black, for the counter information, as in this example from GRD’s Second Front: 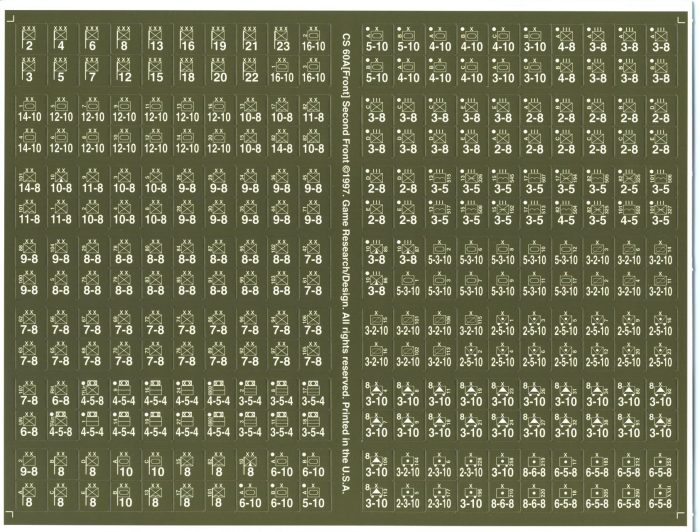 One can see that the white shows up much more clearly on a dark Olive Drab than black does.  Critical Hit could easily do this (it does it for its black SS counters, for example), but apparently did not think to.

The resulting black on dark Olive Drab American counters in St. Lo are counters that some ASLers may be perfectly fine with, while others may not be particularly happy about.  It should be noted that one additional problem of using alternative counter schemes for ASL counters is that, if one runs out of provided counters, using official ASL counters (or even regular green Critical Hit counters) can create issues such as concealment counter mismatches.

Critical Hit apparently realized that the provided counters might not be sufficient, because they insert an odd bit of text at the end of the rules:  “If there is a need to dip in for a counter to your standard collection…please accept our apologies and take note of the heroism of the men-at-arms we lovingly depict in our modules.  May we all emulate them to the best of our abilities in all manly pursuits.”  In other words, if you need more counters, don’t bitch, because men gave their lives in Normandy.  Kind of a strange response.

The scenarios are also long.  Leaving aside the monster 22-turn scenario, which of course is long, the remaining 8 scenarios average a length of 8.75 turns each.  For comparison’s sake, the average ASL scenario published these days tends to be 5-6.5 turns long.  Of course, when playing historical map scenarios, many ASLers tend to like their action on the meaty side, so this may not be a drawback. However, it is worth nothing in terms of considering play time.

Many of the scenarios feature Americans simply having to attack and take certain map areas or enough objectives in those map areas that they effectively control it.  For example, SL2 (Stopped Dead), requires the Americans to control all building [sic] at level 1 or higher and to chase Good Order German MMC from within four hexes of a particular hex.  To do this, they have a whopping 20 squads and 8 crews (apparently for use with SW; they have no guns), plus OBA.  The defending Germans have 17 squads, three Guns, OBA of their own, and an array of fortifications that include 2 pillboxes, 8 Trenches, 6 Foxholes, 6 Wires, 1 Roadblock, and 12 A-P mine factors.

2020 Update: In 2020, Critical Hit released, for separate purchase, large-hex versions of many of its products, including this one. The maps came in two varieties:  1) a MONSTER Map Set, with larger-than-normal hexes, and 2) an Uber MONSTER Map Set, with even larger hexes still. However, for St. Lo, Critical Hit may only have released a “monster” map set and not an “uber monster” map set. 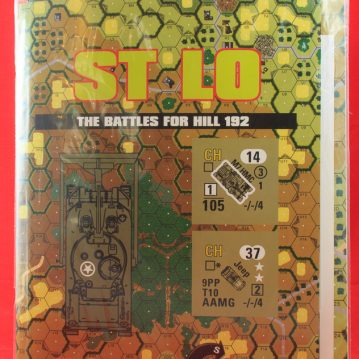