Sturmgruppe Eisen (hereinafter just Eisen) is a historical module from Critical Hit depicting part of the attempt by the Germans to use glider-borne forces to capture bridges over the Albert Canal in Belgium in May 1940 to facilitate their invasion of France and the Low Countries.  Each different force received a sort of code name; Sturmgruppe Eisen (Stormgroup Iron) was the name for the 90 or so force tasked with capturing the Kanne bridge over the Albert Canal, a key bottleneck on the road from Maastricht to Liege.

If this sounds a little bit familiar, it is because years ago, in an issue of Critical Hit Magazine, Critical Hit published a mini-module on one of the other stormgroups, the one tasked to take the bridge at Vroenhoven. In typical Critical Hit fashion, this module was later renamed and reprinted several times, as Facing the Blitz and Sturmgruppe Beton.  Sturmgruppe Eisen is thus a sort of sister product to the Vroenhoven module, and designed by the same person, Belgian ASLer Pedro Ramis.  It is not clear whether Eisen is a new product, in the sense of having been designed recently, or if it was submitted back in the early 2000s when Vroenhoven was submitted and simply not published until now.  In the past several years, Critical Hit has been raiding its closets of old submissions, looking for items to turn into new product, so this scenario is feasible.

There are only two pages of rules for Eisen, meaning there need be little investment of time before play.  Rules explain casemates and trenches printed on the map, the Kanne bridge itself, and a few rules distinguishing German paratroopers and the Belgians (such as their lack of grenades).  There are also “slope light” rules, in keeping with Critical Hit’s tradition of providing simplified versions of some of the less popular ASL rules.

The centerpiece of most HASLs is their historical map.  Like most mid-2010s Critical Hit product, the Eisen map is formed by combining a number (six, in this case) of 12″ x 18″ glossy map panels printed on light cardstock/heavy paper.  Experience has shown that it is a pain to try to fit together more than four such panels, so some inconvenience is involved here.  The gloss and stock made the map colorful, but the terrain hues chosen to represent the varying  heights were unfortunately chosen, with the result that a large chunk of the map, set on the highest terrain level, is an extremely dark brown, on top of which are some jarring yellow grainfields. The buildings are also poorly rendered, especially the smaller ones, making the map a fairly mediocre one by recent Critical Hit standards.

Players may also find the large size of the map a bit odd considering the very small size of the scenarios.

Eisen comes with seven scenarios. Most of them use only a tiny part of the playing area.  Indeed, many of the scenarios are themselves tiny, something typical of Ramis designs and one of the major criticisms of Vroenhoven. SE1 (The Enemy’s Behind Us), for example, pits 2 German squads against 4 Belgian squads. SE3 (Clearing a Flank) features four German squads and three Belgian squads. Part of the problem, of course, is that the forces involved in this action were very small to begin with, perhaps too small for good use in an ASL historical module.

There are three scenarios that one might put in the “normal” range of ASL scenarios. SE2 (Bridge Blown!) features 8 German squads (who enter via Glider Landing) pitted against 7.5 Belgian squads and three guns. SE6 (“Resistance Great”) has 13 German squads (some of whom enter by Paradrop) attacking 5 Belgian squads, various machinegun crews, and several guns.  Finally, SE7 (Group Eisen) is the “monster” historical scenario (though “monster” only relative to the other scenarios here) that uses the whole map.  It features Sturmgruppe Eisen, all 9 squads and 5 crews of it, as well as some paradropped reinforcements (6.5 squads), and some relieving German infantry (7.5 squads).  The Belgians have, scattered all over the map, some 32 squads, various guns and machinegun positions, and three “optional” AFV reinforcements.

This scenario is also the only scenario designed by Pedro Ramis; it is designed by Paul Kenny. This suggests it was not part of the original submission but was subsequently added by Critical Hit to make up for the preponderance of tiny scenarios.  It also gives credence to the theory that Eisen is not a recently designed product, as Paul Kenny does not seem to have been active on the ASL scene for several years.

Four of the scenarios use Air Support rules.

Eisen comes with a surprising number of counters.  In typical Critical Hit fashion, its web marketing copy for the product claims it comes with 368 counters and the product package claims that it comes with 456 counters, but both are wrong.  It actually comes with 2 sheets of 1/2″ counters (560 total) and one half-sheet of 5/8″ counters (88), for a total of 648 die-cut counters. However, few of them are original and a number of them, as the rules note, are not even for use in the module.

The first 1/2″ countersheet is a Belgian infantry sheet, depicting MMC, SMC, and SW for Belgian units, just as one would find in The Last Hurrah. Except for a few location markers and a few “Boresighted Fire lane” markers, none of them are original. The 5/8″ half-sheet contains German gliders and planes, and a few German odds and ends, and a handful of Belgian guns and vehicles (none new), plus 4 Belgian aircraft counters.  The second 1/2″ countersheet contains German MMC, SMC, and SW. As with the Belgians, there are few original counters here.  The one significant exception to that are the Fallschirmjäger counters.  These counters, which also appeared in Vroenhoven and were controversial there, depict German paratroopers as supermen.  They have 7-5-8 squads with a broken-side morale of 9. They are also Elite, Stealthy, Assault Engineers, Sappers, and can Self-Rally.  Desperation Morale shits you not. If that weren’t enough, they can also voluntarily initiate Hand-to-Hand Close Combat.  Their semen always impregnates women successfully, too.

In the meantime, the lowly Belgians do not even have TPBF and have weakened PBF because of a lack of grenades.

Certainly this is one of the most egregious examples of German Superman Phenomenon perpetrated in ASL.

All in all, Sturmgruppe Eisen seems no more attractive than Vroenhoven did.  It may appeal to particular fans of Air Drops and Glider Landings, or to fans of the France 1940 campaign or more exotic ASL situations generally.  But the tiny scenarios that dominate the product may turn off even such potential customers. 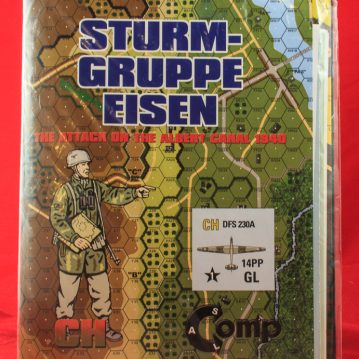