Facing the Blitz is essentially a stand-alone re-release or 2nd edition of a mini-module that originally appeared in an issue of Critical Hit Magazine. It was reprinted as part of a reprinting blitz following the development of a new style of counter artwork by Critical Hit in 2011, as the company started re-releasing all of its modules and products with the new counters. The first bundle of reprints focused on Critical Hit’s various 1940-era publications, which presumably explains why the obscure and not particularly popular Vroenhoven mini-module became one of the first items to get the re-release treatment.

The differences between the original Vroenhoven and the newer Facing the Blitz are essentially cosmetic and there is no real reason for owners of the original version to purchase the newer version. The product is available both with and without the map (which has only minor, basically cosmetic changes). Most of the counters included are basically duplicates of existing German and Allied Minor MMC counters, leaders, or SW. There is a new squad type introduced, the German 7-5-8 squad. This squad is one of two types of squads representing the German parachutists, along with the 5-4-8. The rationale for the 7-5-8 squad is that it represents parachutist squads with inherent LMG, while the 5-4-8 represents those without one (which is odd in itself, since in ASL even the 4-6-7 squad is assumed to include an inherent LMG). If this weren’t enough, the Fallschirmjäger are also Assault Engineers and Sappers, are Stealthy, have Assault Fire and Spraying Fire, have a 9 broken morale, can initiate Hand to Hand CC, can guard extra prisoners, and can Self-Rally. In other words, they are totally ridiculous “supermen”–one of the most egregious instances of supermanning in the history of ASL. A few 5/8″ counters include a few Gliders and a smattering of other units.

The module was designed by long-time tactical gamer Pedro Ramis (who has essentially moved over to the ATS system) and depicts the German airborne assault to take a bridge over the Albert Canal at Vroenhoven on May 10, 1940. The six scenarios are mostly small in size (two medium-sized scenarios are included). Some are basically too small to be fun or interesting, such as VHN3 (End of Command), which features 8 German squads attacking two Belgian squads and a crew (with no SWs). There is really only one interesting scenario, VHN1 (Winged Devils), which is of interest primarily because it is a relatively rare Glider Landing scenario.

Since its release, this mini-module has been largely ignored by the ASL community and probably justifiably so. It is probably of interest only to completists, airborne fanatiques, and people dying to play Belgian scenarios.

There is one additional issue–its cost. This product lists at $49.95. When one realizes that it was originally included as a throwaway extra for a magazine, the huge cost of this product is clearly ridiculous. Critical Hit is asking people to pay $50 for a tiny map and six measly scenarios? This is essentially price-gouging.

3rd Edition (Sturmgruppe Beton) notes:  In 2016, Critical Hit announced it would release a new edition of Facing the Blitz/Vroenhoven, though without explicitly saying so. This version would have a larger hex version of the old map, with newer artwork.  Presumably the scenario cards and rules would be updated to the latest style, though the included counters are apparently holdovers from the 2nd edition (that edition came with 2 duplicate sets of 156 counters, while the marketing content for the 3rd edition claims 2 duplicate sets of 140 counters, while claiming it is the same countersheet as in the 2nd edition, so it is not completely clear how many counters are included).

This product was not purchased by Desperation Morale for inspection here, because the product is a tiny product that was never very good.  There is no reason to get any edition of this product and there is absolutely no reason to buy this product all over again if you happen to own either of the previous editions.  It just isn’t worth it.  The large hexes add absolutely nothing to a product that features tiny scenarios. If someone who did purchase this edition wants to contribute photographs of the product to Desperation Morale, please feel free to do so.

2020 Update: In 2019-20, Critical Hit released, for separate purchase ($24.95), a large-hex “Monster Map Set” version of the Vroenhaven map (only). Alert the president of your local Vroenhaven fan club. 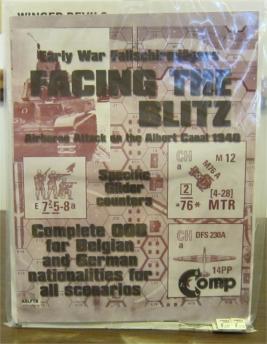