The Sweet 16 Geo Board Collection 2 (S16-2) is a follow-on product to the 2013 Sweet 16 Geo Board & Scenario Collection, which received a Desperation Morale CONSUMER ALERT and Do Not Buy recommendation.  The reader is encouraged to read the write-up for that earlier product, as almost all of the comments related to that product also apply to this sequel, including the CONSUMER ALERT.  The major exception is that this product contains no scenarios at all, original or re-tread, but simply maps (and a couple of bridge overlays).

The concept behind the Sweet 16 geoboards is to create “alternative” (i.e., derivative but not clone) versions of all of the official ASL geoboards.  So Sweet 16 geoboard x18 is simply a geoboard that is very much like but not identical to official ASL board 18.  The rationale offered for such boards is that ASLers who are tired of using the original boards in their scenarios can swap them out for these boards instead and get some sort of “new” playing experience.  Well, they can certainly get an unplaytested playing experience, but it is hard to imagine a substantial audience of people willing to do this.

It is not as if there aren’t an unlimited wealth of possibilities for new board designs out there in the world.  If Critical Hit had wanted to do a map pack, they easily could have commissioned new boards from a variety of would-be board designers out there, or designed their own new boards, thus actually adding to the milieu of original ASL geoboards. Instead, the release of these re-jiggered knockoff boards seems more like a cynical attempt to make a quick buck off of ASLers willing to buy anything with the letters ASL on it somewhere.

It was only a few years ago that Critical Hit began releasing ASLSK-style geoboards of original design.  However, they seem to have abandoned that effort, as they abandon so many of their initiatives, in favor of a cheaper method of printing geoboards.  The boards in S16-2 are not mounted, of course, but neither do they come in the unmounted cardboard form of ASLSK-style geoboards.  Rather, these boards are printed, in halves, on 9″ x 12″ sheets of thick paper (the thickness of the paper that official overlays are printed on).  Essentially, the boards look and feel like half-board-sized overlays and, in fact, must be cut out and trimmed just like overlays, because a white border surrounds each half-board on all four sides.  Thus this product is really more of a do-it-yourself kit than anything else, because purchasers must use scissors or a rotary cutter to trim the sides off all 20 sheets of paper in order to be able to assemble them as 10 boards.

If that weren’t enough, the boards have another significant physical problem:  they do not match up right with official boards (or any third party board printed correctly).  Lengthwise, there is no problem.  However, measured along the narrow (8″) side, the Sweet 16 geoboards are typically 1/16″ too short, so that they do not line up properly when matched with official boards (a mismatch that would be cumulatively exacerbated by 1/16″ for every additional map required to line up that way).  Maps are matched up lengthwise more often than along their narrow ends, which limits the scope of the problem, but this is still considered to be a significant physical issue.

Unfortunately, the problems with the maps do not stop there.  The original Sweet 16 maps had a glaring problem in how they rendered building depictions.  In short, buildings oriented exactly vertically or exactly horizontally appeared fine on the geoboards, but any building or part of a building that had any other sort of orientation other than exactly vertical/horizontal was displayed on the map with crude, jagged graphics that appeared pixelated.  The result was that the more buildings one of the Sweet 16 geoboards had, the uglier and more crude the graphics appeared.

Though people complained about the patently substandard building graphics of the Sweet 16 boards, Critical Hit did not bother to try to fix the problem with the S16-2 collection.  Thus the 10 maps here have the exact same messed-up buildings that the previous product did.  This makes urban boards x20, x21, x22, and x23 (nearly half of the collection) look particularly bad.

There are other sloppy graphic glitches as well, such as board x20b, which overlaid bridge images on top of the road layer instead of vice versa (in contrast to the other maps), Or the mysterious “crooked building” which shows up on x22a (as building G6) and x23a (as building D6) and x24b (as building R2).  In its latter two incarnations, the building sports offset phantom hex center dots shadowing the actual center dots.  In the case of R2, it also sports a phantom hexgrid running through the building offset from the actual hexgrid.  Sloppy sloppy sloppy.

Critical Hit currently charges $79.95 for this product, which consists of 20 sheets of thick paper/thin cardstock and a tiny strip of two bridge overlays.  Moreover, the product has to be assembled to be used, contains both physical and graphic problems, and in the end is simply a set of map graphics that are derivative of official geoboards already published by MMP with higher physical and graphic quality.  These factors together earn this product a Desperation Morale CONSUMER ALERT and a Do Not Buy recommendation. 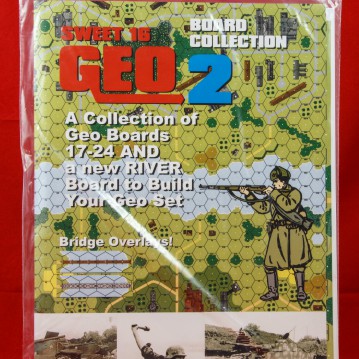