Certainly, the Operation Overlord collection, of which the two dice here are one of its six sets, has virtually no connection to ASL.  It is not tied to any particular ASL product, though there is an ASL product for one of the units represented here, the 29th Infantry Division (in 2016, MMP released an Action Pack centered on this unit).  That, however, seems to be coincidental. Oddly, no one has ever done a scenario pack focusing on the famous U.S. 1st Infantry Division.  For those confused by the product’s title, “The Big Red One” is the nickname for the U.S. 1st Infantry Division and “29, Let’s Go!” is the divisional slogan for the U.S. 29th Infantry Division.  These were the two units that landed on Omaha Beach on D-Day.

The two dice are 5/8″ (16mm) ball-cornered precision dice, each white with black pips.  In lieu of the 1-facing, each die has a divisional insignia, one for the 1st and one for the 29th.  The 1st’s image is a red foil ‘1’ on a gold foil shield; the 29th’s insignia is a red and silver foil yin-yang symbol featuring the number 29.  Both dice are attractive. 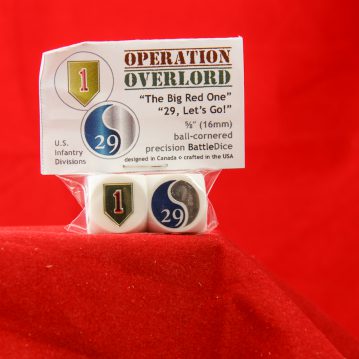