The eleventh Action Pack from Multi-Man Publishing debuted in 2015.  Unlike its immediate predecessor, which was an un-themed action pack, AP11 does have a theme:  all of its scenarios involve the U.S.  29th Infantry Division, which landed on D-Day and fought its way across France and into Germany.  This is MMP’s first unit-themed scenario pack or “unit study,” as they are sometimes called, following in the footsteps of previous unit studies of U.S. divisions such as Bounding Fire Productions’ Hell on Wheels Battle Pack (1999), featuring the 2nd Armored Division; Heat of Battle’s Buckeyes!, featuring the 37th Infantry Division, and Schwerpunkt’s Rally Point Volume 5: Thunderbird Pack, featuring the 45th Infantry Division.

One of the reasons why a unit study on the 29th Infantry Division by somebody somewhere was almost inevitable is because it is the only U.S. division to be the beneficiary of a large, multi-volume unit history written by Maryland National Guard historian–and wargame designer–Joseph Balkoski.  Thus a lot of source material is extremely accessible to would-be designers.

That it is MMP that chose to do it first is also not surprising, given the oft-demonstrated fascination that MMP’s principals have exhibited for Normandy, a subject to which they constantly return (along with Arnhem).  All the scenarios of AP11 were designed by Perry Cocke and Ken Dunn (the latter of whom is also developing a–you guessed it–Normandy-themed HASL for MMP).  Six of the 10 scenarios of AP11 are set in Normandy and a further three are set in Brittany.  Only one scenario is set in Germany; it takes place in October 44, meaning that there are no scenarios at all for the second half of the 29th Infantry Division’s combat history. A sequel, perhaps?

Themed scenario packs are always a mixed bag for ASLers, in that they are wonderful, magical releases if the theme appeals to the purchaser, but rather meh for those to whom it does not.  So invariably there will be some ASLers who will not care for the theme.  However, the chosen theme is nice in that it covers a normal infantry unit in World War II, rather than some glitzy and over-covered elite unit, like an airborne division or an SS panzer division or a Marine division.  Regular infantry divisions were what won WWII for the U.S.

AP11 comes with two new 8″ x 22″ geoboards (71, 72), which in many respects are the true heart of the Action Pack, because regardless of whether or not ASLers like or ever play any of the included scenarios, they are almost inevitably going to be using the geoboards in the future.  At this point, there is not much to say about the physical or graphic quality of the boards, in that they are at the same high standards that MMP has had since they went over to the “new style” unmounted boards with computer graphics.

One can, however, address the utility of these boards.  Each time MMP releases a board, the entire worldwide coterie of ASL scenario designers holds its collective breath to see whether or not it will be exciting or new and how much additional utility or variety it will add to the system.  Will the designers release their breath in an angry argh, with a slightly bored sigh or in rapturous ecstasy?  With AP11, it may be a bit closer to a sigh, but nowhere near an argh.

Of the two boards, it is board 72 which offers the bettert addition to the system.  The dominant feature of the board is a board-length stream, presenting a nice water obstacle option for scenario designers.  On one side of the stream woods predominate; on the other side there is a mix of farmland and buildings, with a smallish one-level hill.  The buildings, unfortunately, are a bit too numerous and big to easily translate the board into PTO; otherwise, it would have universal utility.  As is, scenario designers will have to use overlays and/or SSRs to make it more PTO-suitable.  Still, it is a useful addition to the system.

Board 71, on the other hand, is another small village board.  The “top” half of the geoboard contains a small crossroads-ish village with various one-hex stone and wooden buildings and 5 narrow (but oddly non-rowhouse) multi-hex buildings.  For a long time in ASL scenario design-dom, those Dark Ages when boards 1-52 were all that designers had to work with, there was frustration at the limited number of boards that could be used for village fighting action, and the small number of compatible boards often tended to be overused.  However, in recent years there have been a wealth of new official ASL geoboards that have greatly added to the stock of village boards, including Boards 53, 56, 57, 59, 63, 65, 67, 70, p, q, s, u, y, 1a, 2a, 3a, and 5a.  As a consequence, the value that Board 71 adds to the ASL board collection is limited.

One of the reasons the board may be in the Action Pack has to do with the way that Action Packs are put together.  Except for the oddball Few Returned, which was not originally designed as an Action Pack but later converted into one, every scenario in every Action Pack uses at least one of the boards included in that pack.  Because of this, the designers may have thought it was necessary to include another village board in the pack, regardless of its contribution to the overall ASL board oeuvre.  [Note:  the streak would soon be broken with Action Pack #12: ASL Oktoberfest, which also used its included board in only a few scenarios]

In any case, it’s a perfectly serviceable map for players; it is simply not that exciting for designers.

AP11 also comes with a sheet of three overlays.  The first overlay is OB1 (Open Beach 1? Omaha Beach 1?).  This overlay, about 8″ x 6″, is a combined ocean/beach overlay that is designed to cover the narrow end of a geoboard.  One of the knocks on how ASL handles beaches is that there are no beach maps, just generic ocean and beach overlays that must be assembled to “create” a beach for one or more geoboards.  This is cumbersome and irritating.  OB1, which provides a beach area with just a single, reasonably-sized overlay, is a convenience that players will appreciate.  The only problem with it is that it is very scenario-specific, being designed for a single scenario, the sole amphibious landing scenario in AP11, AP101 (When I Call Roll).  Its narrow nature means that it cannot easily be used for other amphibious landing situations, because few such scenarios are likely to require such a narrow beach.  Also, it has a seawall, which would have to be SSR’ed out for many scenarios.  In this, OB1 resembles another Normandy-specific overlay, the marsh/causeway overlay of Winter Offensive Bonus Pack #4.  Both overlays are so situation-specific that they are virtually non-contributions to the ASL overlay collection (although OB1 does have a bit more potential than the marsh/causeway overlay).

Overlay X30 is also fairly specific but does have enough potential for use to justify its existence.  Though labeled as a building overlay by its “x” designation, it is essentially a small, squarish fort, and used as such in the two AP11 scenarios in which it appears.  A lot of actions in World War II centered around fights for old forts and fortresses; X30 can help designers represent some of the smallest of these.  The overlay is used in two scenarios–AP107 (Bitter Fields of Fire) and AP109 (Not Bad for a Lone Croc)–in one scenario the overlay is really just a building, a notional fort.  The other scenario provides the overlay with fortified hexes and protection from flamethrower and WP attacks.

The third overlay, St4, is a small aquatic overlay basically designed to transition a river into a stream.  It may come in handy for designers from time to time.

The 10 scenarios of AP4, all naturally featuring U.S. and German troops (with a British guest appearance), are overwhelmingly medium-sized, with a few small and large actions thrown in for good measure.  One scenario has OBA; no scenarios use Air Support or Night rules.  As mentioned above, there is a single amphibious scenario in the mix; there is also a Pointe du Hoc scenario, but it does not represent the landing.  In the amphibious scenario, AP101 (When I Call Roll), the Germans have little more than 10 half squads, an HMG, a LMG, and a 50mm AT gun.  This makes the scenario a bit dicey for the German player–if the HMG or AT gun malfunction, trouble could erupt.  Trouble could erupt, too, from the SSR that reduces German ELR for each building/trench/pillbox the Americans control.  Moreover, if the ELR reaches 0, each German unit must pass a TC or be eliminated.  So a few die rolls may be key for the German player.  Of course, he gets to shoot Americans trying to cross open ground, so it will be a dicey scenario all around.  The advantage of the scenario is that it is a very small and manageable amphibious action that can serve as a good intro to the assault landing rules.

The Pointe du Hoc scenario may be a popular choice.  It is one of the meatiest scenarios in the pack and offers an interesting “cavalry to the rescue” situation in which Rangers and 29thers must get past a cordon of German troops to relieve the Rangers who had scaled Pointe du Hoc.  The Germans can get an immediate victory by controlling a trench or pillbox for two consecutive Game turns, so it may well be that both sides get to attack and defend in this scenario.  From early playings, the most popular and balanced scenarios so far seem to be AP106 (Helluva Patrol Leader) and AP108 (Yes Sir!).

A number of the scenarios share characteristics.  Several have SSRs which force American AFVs to move before all American infantry do or after all of them move, presumably to represent bad infantry-armor cooperation.  Several scenarios allow the U.S. player to choose from two different main OB forces.  General Norman Cota makes several appearances as a 10-2 leader.  A couple of scenarios have U.S. heroes and give special abilities or bonuses to units stacked with the heroes.

Overall, the scenarios of AP11 seem pretty straightforward and playable.  A number of them are suitable for tournament situations, as long as the tournament rounds are not too short.  The pack is unlikely to knock the socks off of anybody but it seems to be a solid effort and worth getting. 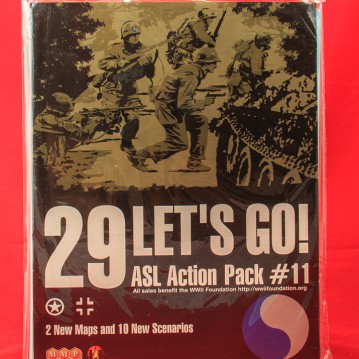