Contents:
Desperation Morale has not examined this product and cannot confirm its contents. However, it appears to contain a historical map formed from 6 glossy 12" x 18" heavy paper/light cardstock map panels, 4 rules pages, 9 scenarios, 5 countersheets of die-cut counters (although Noble Knight Games reports only 3 sheets in its sample copy). Not all players may have received all the same components.

Thunder at Melikhovo: Kursk 1943 is a Critical Hit historical module published in 2019 that concentrates on the attack of the German 6th Panzer Division of Army Detachment Kempf on the southern flank of the German unsuccessful offensive at Kursk in the Soviet Union in the summer of 1943. Thunder is really only part of a larger module that was seemingly split into two for publication, with the second half being the oddly named Kursk: Southern Salient 1, for which ownership of Thunder is a prerequisite.

The foundation of Thunder is its historical map, formed from 6 glossy 12″ x 18″ heavy paper/light cardstock map panels. More than four can be awkward to assemble, but most scenarios do not use the whole area.  One of the two monster-sized historical scenarios requires not only all the map panels from Thunder but also those from its sister product, Kursk: Southern Salient 1. The map is generally attractive, as Critical Hit maps of this era tend to be, with the exception of the rendering of some of the buildings.   Somewhat confusingly, the sample copy used by Noble Knight Games for its photograph contains 9 map panels instead of the 6 that players report having, but the scenarios in that photograph do seem to be the Thunder scenarios.

There is also confusion about how many counters appear in the module.  Noble Knight’s image shows three countersheets, but ASLers have reported four and even five countersheets (see photos for various examples).  Critical Hit sometimes includes “bonus” counter sheets for people ordering direct from Critical Hit and it is possible that is what has happened with some copies of this product. Most, though not all, of the counters are not new to the system and are not actually needed.  Several ASLers have complained about the counters, because there are different color shades (or different colors entirely) for the same nationality on different countersheets.  Some have suggested the counters were cobbled together from previous products–which is something that Critical Hit often does, but Desperation Morale does not have an examination copy and cannot confirm/verify this.

Thunder comes with 9 scenarios, two of which are monster scenarios and, as mentioned, one is meant to combine with Kursk; Southern Salient. All but one of the scenarios, however, are at least large in size.  There are minimal rules for the module and some of the rules are not even necessary, like the rules for “Bayonet Charges,” which were cribbed from old Kinetic Energy rules and are thrown by Critical Hit into many of its products of this era. 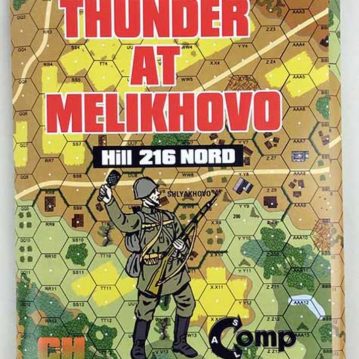