Lone Canuck continues its recent trend of expanding the themes of its scenario packs beyond German unit histories with To Battle By Air #1 (providing the promise of sequels), a mini scenario pack whose unifying theme is airborne forces of different nationalities.  All of the scenarios depicted portray airborne battles, although only one of the scenarios actually features an Air Drop itself.

With the longest of the scenarios only 6 1/2 turns long (TBBA3 again), this pack is essentially a beer-and-pretzels pack with scenarios that can easily be finished even when there is not very much time for playing.  It continues a recent trend in Lone Canuck products of providing more smaller scenarios (many Lone Canuck packs have numerous large scenarios).  The small size and interesting situations of these scenarios may make them attractive options for a “quickie” session of ASL.

Note:  There is errata for TBBA1-6 (Flames on the Borders).  The specifics are available at the Lone Canuck web site, but Lone Canuck also thoughtfully published a replacement scenario card and included it in To Battle By Air 2. 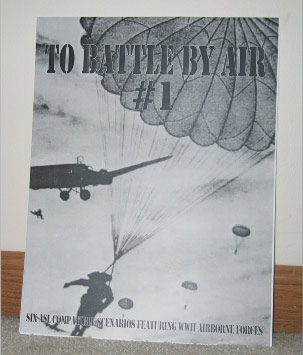