Contents:
12 scenarios, 6 non-geomorphic non-historical maps (various sizes, including a large 24" x 36" map, labeled MC1 through MC6; four of these maps appear on one large sheet and must be cut apart), 1 page rules

Total Axis Pack I (one hopes this will not be the latest Critical Hit “series” with only one iteration) is an interesting experiment, one that somewhat surprisingly has not been done before. Both official and unofficial publishers of ASL material have created a variety of standard geomorphic maps as well as many non-geomorphic historical maps. The maps in TAP1, however, are neither geomorphic nor historical. This means that the they have the “liberty” to represent terrain types that simply cannot easily be created because of the constraints of the geomorphic mapboards. Designers wanting a large hill formation, for example, are doomed to be disappointed when looking at the geomorphic maps for possibilities, because even the largest hills must be constrained within an 8″ x 22″ mapboard. Non-geomorphic maps allow such features to be created for ASL, though of course at the expense of flexibility, as they cannot typically be combined with other maps.

The maps of TAP1 (all of them created originally for an ATS release called Mannerheim’s Cross) include:

MC1: This long and narrow (7 hexes by 27 hexes) map features a road moving through mostly flat (there is a small valley and also various slopes) wilderness terrain, including the occasional woods and crags. Because of the unusual shape of the map, it probably is of use only in limited situations, such as portraying a long fighting withdrawal or perhaps the ambush of a convoy.

MC2: The largest map in the set (24″ x 36″ or 27 by 45 hexes), MC2 can be made even larger, as it is combinable with MC5 (see below). It is also the most striking map of the set as well, featuring some imposing terrain, most of it wilderness. The bottom left corner of the map includes a small village (wooden houses, small church, small graveyard). Above the town is a large hill that dominates about a third of the map. It has four separate peaks, inclduing one with level 5 hexes). In the center of the map is a small lake (large by ASL standards), from which a stream runs in two directions, up and down, bisecting the map. To the right of the stream, is a long, narrow (up-down) hill formation that dominates the right edge of the map (Map MC5, which can be placed to the right of MC2, adds another small town and a large river). The map is a very attractive map, with a lot of interesting tactical aspects to it. It can be used to represent sparsely settled areas such as Finland/Northern Russia, the Caucasus, the Balkans, and some mountainous regions of China or Korea, among other places.

MC3: This square map (16 by 19 hexes) shows part of a small town (stone buildings, some rowhouses), dominated by several large cemeteries. On the town’s outskirts run a couple railroad tracks. The terrain is mostly flat, with one small hill and one small valley. The map graphics are not great on this map: the grey of the buildings and paved roads blend into the background green, and the cemeteries are almost lost–there is just not enough contrast. Not an attractive map, nor (except perhaps the multiple cemeteries) an interesting one.

MC4: Another long, narrow map (7 hexes by 27 hexes), MC5 features hilly wilderness terrain leading up to a hamlet bisected by a bridged river. Because of the lack of room for maneuver, this could mean bloody bridge crossing scenarios. Like MC1, its shape makes it of limited utility.

MC5: This large map (18 hexes by 27 hexes) depicts a river valley. It is a nice map, with good color contrasts and interesting terrain configurations (particularly the location of different hills and hamlets). A number of interesting scenarios could use this map. It also combines with MC1 to create a particularly large map.

MC6: A rectangular map (10 by 19 hexes) depicting sparsely settled shoreline–think of a few fishing huts along the edge of a Finnish lake. There is enough vegetation on the map that it could conceivably be used for some PTO actions as well.

Although the highlight of TAP1 is its non-geomorphic maps, only half of the 12 scenarios use them. The other 6 scenarios use geomorphic maps, including TAP#4 (Streets Afire), which uses DASL boards. TAP#1 (Balkan Suicide) uses the MC2/MC5 combination (though not all of MC2 is in play), TAP#2 (White Death) uses MC1, TAP#5 (Cross-Check) uses MC3, TAP#6 (Viku Baptism) uses MC5, TAP#9 (Edelweiss in Decline) uses MC6, and TAP#10 (Bertalan’s Bridge) uses MC4. So, with the exception of MC5, each map is only used in one scenario apiece.

The subtitle of the pack is “Eastern Front Firestorm,” and if one includes the Balkans, then indeed all of the scenarios are set on the East Front in World War II, including the Winter War. However, the topics are fairly varied, and include a mix of nationalities and fighting situations.

TAP#1 (Balkan Suicide) pits Yugoslav partisans (strangely armed with Soviet instead of British weapons) and Soviets and Bulgarians against Waffen SS troops in Serbia in 1944. TAP#2 (White Death) is a 1939 Russo-Finnish Winter War action. TAP#3 (Die a Bitter Death) features German and Romanian troops fending off Soviets in the Crimea in 1944. TAP#4 (Streets Afire) portrays a Soviet attack on Waffen SS and Hungarian troops in Budapest in January 1945. TAP#5 (Cross-Check) features a Romanian/Soviet armored attack on Hungarian positions in Hungary in 1944. TAP#6 (Viku Baptism) is another Winter War scenario; however, it requires counters that can only be found in another Critical Hit product, Finland at War, Vol. 1: Jaktasota.

TAP#7 (A Vicious Melee) pits Waffen SS against Bulgarians in Yugoslavia in 1944. TAP#8 (Ghastly Sojourn) features a Hungarian assault on Soviet positions in the Ukraine in 1944. TAP#9 (Edelweiss in Decline) portrays a Finnish attack on German positions in late 1944; though the scenario card doesn’t say so, it appears that counters only found in Finland at War are required in order to play this scenario. TAP#10 (Bertalan’s Bridge) features a rare Yugoslavia 1941 action, with Hungarians as the aggressors. TAP#11 (Pescara on the Bug) depicts a Hungarian attack against Soviet positions in 1941. TAP#12 (Petrescu’s Cadets) features Romanians, as its title suggests, defending against a Hungarian assault in September 1944.

Two scenarios could be considered small, and three more medium-sized, but the remaining seven are large (none are monstrous in size). There are no night scenarios, although one scenario uses night rules for two turns. One scenario features Extreme Winter. Three scenarios have OBA. Overall, the scenario mix is not burdened by heavy SSRs.

Perhaps the most interesting looking scenario is TAP#1 (Balkan Suicide), which uses maps MC2 and MC5 to create a large, imposing map area. The scenario features a huge Allied attacking force (10 Yugoslav partisan squads and two guns, plus 8 Bulgarian squads and one gun, as well as 6 Soviet assault engineer squads–complete with DCs and FTs–and 12 AFVs. The defenders include 8 Waffen SS and German squads and 3 guns (including an 88L AA gun), aided by a few mine factors, augmented by reinforcements of 3 squads, 3 halftracks and 3 Tiger tanks. At first glance, it would seem that this scenario could be suited for multiple players, with different players taking on elements of the Allied force.

Another interesting scenario situation appears in TAP#3 (Die a Bitter Death). In this German/Romanian vs. Soviet scenario, the Soviets have two chances to win. They win if they prevent a certain number of German units from exiting the map. However, if the Germans do succeed in exiting enough forces, the Soviets can still win by mopping up all the Romanian troops left to hold the bag as the Germans run off to safety.

The most dubious scenario is TAP#2 (White Death), which features Finnish 8-3-8 squads that magically reappear in unlimited numbers, as soon as they are eliminated. It is bad enough to fight Finnish “supermen” even when they don’t come back from the dead.

Overall, Total Axis Pack 1 has a lot of very interesting scenario situations, made more interesting still by often not using standard maps.   Sadly, the scenarios in this pack have not been played as often as they probably ought to be. 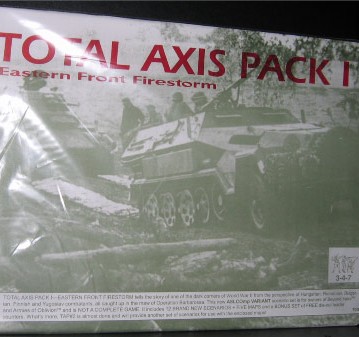