TAP2, following in its footsteps, adds a dozen new scenarios, but only one additional map, a long narrow map with a town on one end and orchards and fields in the middle and on the other end.  It is unremarkable and not particularly interesting.

The pack is heavily weighted towards large scenarios; only 1 is small and only 3 are medium-sized.  Four scenarios have OBA (including one NOBA); several have Finnish ski-capable troops.

Two of the scenarios immediately stand out for their exoticism and interest level; these are the two scenarios featuring Italian and Japanese troops fighting each other:  TAP#21 (Last Message Home) and TAP#22 (Last Outpost).  Both take place in Tientsin, China, in September 1943, following the armistice between the Allies and Italy.  The Italians had long had a battalion to keep order in this quasi-colony of theirs, and following the Italian surrender, the Japanese surrounded the Italian quarter and demanded their surrender.  The Italians offered this soon enough, but not before some skirmishes had occurred, and these fights provided scenario grist for designer David Lamb.  Not surprisingly, they are the only Italian vs. Japanese scenarios in the ASL milieu.

This is a pack that probably has good play value, but its cost value is lessened by the need to own TAP1. 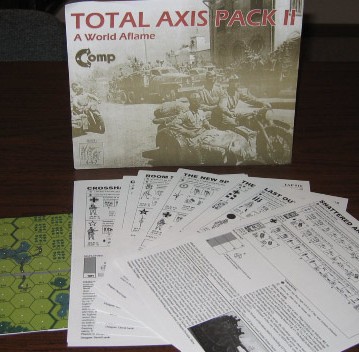