Total Pacific Theatre Pack 1, along with its sister release, Total East Front Pack 1, were supposedly the first of a series of so-called “Phase II” scenario packs, each of which would have not just scenarios but also a countersheet, overlay sheet, or small map included.  Like so many other Critical Hit initiatives, there was no follow up.  No “Total Pacific Theatre Pack 2” ever emerged.

The included countersheet consists mostly of “Australian” SMC/MMC, of a quality less than official counters.

The scenarios have not received much play since their release.

Commentary, 2nd Edition (i.e., Digger Pak I):  The original Total Pacific Theatre Pack 1 was released during a period (roughly 1997-2001) when Critical Hit was churning out products with little regard to quality control or consistency.  It contained a handful of scenarios and a countersheet full of duplicate counters (only a handful of counters on the sheet were actually new counters needed by scenarios).  Interestingly, its new iteration, as Digger Pak I, comes during a second era in Critical Hit’s history when the company has prioritized churning things out rather than emphasizing quality.  With their decision in 2010 to upgrade their counter graphics, Critical Hit began a process of rapidly reprinting or recycling almost its entire catalog of products, re-naming almost all of them in order to encourage the unknowing to re-buy the products, exhibiting little regard for quality control along the way (which resulted in, for example, a number of mis-designed geomorphic maps).

Into this fray of recycling and re-releasing comes Digger Pack I, which is basically a glorified re-release of Total Pacific Theatre Pack 1.  Everything about the product seems designed to appeal to the cynic.  One can start with the title.  Anybody purchasing a product titled “Digger Pack I” would probably expect this to be an Australian-themed product.   Even if they didn’t know what “diggers” were, the large subtitle claims “PTO Action w/Aussies.”  Imagine a purchaser’s surprise when he opens the pack to find the first scenario, DP#1 (The O-Patchers!), which pits Americans against Japanese.   Or flips the card over to find the second scenario, DP#2 (Volckmann’s Guerrillas), which features Filipino guerrillas versus Japanese.  Where are the Australians?  They eventually show up in the third scenario, along with some Dutch, but a “Digger Pack” this product definitely is not.  Australians appear in only 5 of the 12 scenarios (New Zealanders appear in one).  Why call it “Digger Pack,” then?  God only knows.

The purchaser could then turn to the countersheet.  Will there be exciting new counters?  There will not.  The only non-original counters are the four Cleared Fire Zone markers (which appeared in the 2001 edition, too).  The rest of the sheet has some miscellaneous Filipino, U.S., and Japanese counters, all of which are essentially duplicates of official counters, but mostly consists of additional British-colored MMC/SMC.  These counters are ostensibly Australian counters, and if one looks at the magnified counter artwork that appears on the product’s front, one can see that slouch hats have replaced tin cans.  However, the artwork on the counters is so small that the headgear is completely indistinguishable and they look like any other British counter.  Had Critical Hit been enterprising, they could have actually made unique Australian counters, giving them a color scheme of their own (perhaps two-toned, so that they could continue to use British SW).  This would have appealed to Australian ASL players and probably many others.  But this was not done, and as a result, virtually the entire countersheet is unnecessary and will probably remain unpunched in many people’s collections (with the possible exception of the cleared fire zones).

The 12 scenarios include the original 8 scenarios of Total Pacific Theatre Pack 1, plus four additional “bonus” scenarios, which are re-named versions of scenarios previously printed elsewhere.  For example, DP Bonus #4 (Lights Out) was originally CH34 (The Lighthouse) from Critical Hit Magazine.  DP Bonus #3 (Biak Probe) was CH6 (Armored Probe) from Critical Hit Magazine (also CH157, as it was previously reprinted).  DP Bonus #2 (One Last Charge) was originally RP8 (Victoria Cross) from Rout Pak I (and X7 from the Rout Report before that).  DB Bonus #1 (Tenaru Tussle) was just a short time ago RetroPak#6 (Tenaru Meat Grinders) from Retro Pak I, before which it was OAF6 (Colonel Ichiki’s Folly) from OAF Pack 1.

Critical Hit’s willingness endlessly to sell and re-sell the same scenarios is sometimes breathtaking in its audacity.  Take the scenario Victoria Cross, for example.  Critical Hit purchased the rights to all of the original Rout Report scenarios some time ago, and published this scenario in Rout Pak I.  Fair enough.  Then, however, they reprinted it in Retro Pak 2 as well.  Probably defensible; after all, a number of years had passed and the scenario was a good scenario.  However, at around the same time, they reprinted it a third time in Retro Magazine #4.  And now here, a fourth time, as One Last Charge.  At what point is Critical Hit going to stop trying to sell the same scenario to people?

In one respect, One Last Charge is a different scenario, but this is more fodder for the cynic.  The final component of Digger Pack I is a new unmounted geomorphic mapboard, PTO1.  It is an unremarkable PTO-compatible board with a lot of orchards and grain and a few clumps of woods.  It bears a fair resemblance to official map 37 (especially hexrows A-P) and was almost certainly simply designed as an alternative to that map.   In the just-previous batches of recycled material, Critical Hit’s other new geomorphic maps all had mis-sized hexgrids that would not align properly with official boards, which caused numerous complaints.  This problem seems to have been fixed, because the hexgrid of PTO1 does line up with other boards.

What Critical Hit did with this pack was to take its four “bonus” scenarios and swap out one of their previous maps for the new map appearing in this product.  Armored Probe uses Board 37; Biak Probe uses PTO1.  Tenaru Meat Grinders uses Boards 35 and 37; Tenaru Tussle uses boards 35 and PTO1.   Victoria Cross used Board 37; One Last Charge uses Board PTO1.  The Lighthouse used Board 2; Lights Out uses PTO1.  These “bonus” scenarios are the only scenarios to use the new board.

What Critical Hit basically did, then, was not create an original board from scratch and use it to design original scenarios, but instead roughly ape an existing official board so that it could recycle previously-designed scenarios and swap out an original board for the new board.  No mention of playtesters appears in Digger Pack I, so it is not clear if these “new” versions were even given additional playtesting to see if they work with the swapped board.  At this point, the cynic must reign triumphant. 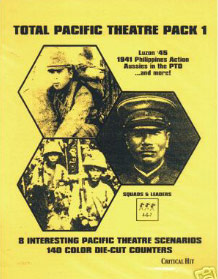