Action Pack #12 debuted in October 2015 at Oktoberfest, the world’s largest annual ASL tournament (9-10 days long and with 150+ attendees a year in recent years), held the first week of October in the enchanting city of Cleveland, Ohio.  The debut of the pack did not “surprise” many, in that these Internetty days most ASL releases are known well in advance, but its release was surprising, if one can appreciate the distinction.  It was surprising in that Action Pack #12 was released only months after Action Pack #11 and Multi-Man Publishing has never–never ever–been known for speed of release or quantity of product.  It was also surprising in that it was released at Oktoberfest, as MMP has paid little attention to Oktoberfest in the past 15 years–concentrating releases on its own tournament, Winter Offensive, in January–and had not debuted anything new at Oktoberfest in many years.

However, the reason why AP12 occurred was due to the efforts of a number of northeastern Ohio ASLers–for decades the region has been a haven for ASL–who wanted something to commemorate the quite commendable 30 years of Oktoberfest.  The whole pack, from map to scenario design, as well as much of the playtesting, was created by northeast Ohioans Bill Sisler, Pete Shelling, “Wild Bill” Hayward and Bret Hildebran (the latter two are also the heroic folks who have run ASL Oktoberfest for a number of years now).

If I may step down for a moment from the role of anonymous, omniscient and snarky write-up writer and speak personally for a moment, I’d like to do so.  Oktoberfest is well worth commemorating.  It is an exhilarating experience for any ASLer and everybody who reads this should make the hajj at least once in their lives.  As of this writing, I have attended half of the 30 ASLOKs held so far and consider myself lucky to have been able to do so (I only wish I had been playing ASL earlier to have been able to have attended more).  My first ASLOK was in 2001, the year I began seriously playing ASL.  However, I still had only a relative handful of scenarios under my belt–and virtually all against only one opponent–when I decided to go to ASLOK for the first time.  I walked into ASLOK a nervous newbie, not knowing a single person there.  But almost immediately, then-tournament director Mark Nixon greeted me warmly and made me feel right at home.  And everybody I played that week also made me feel at home.  It was a great experience and it did a lot to cementing ASL as “the” game for me.  I have played over 200 scenarios at ASLOK and only wish I had the fortitude to play more.  I am grateful to Bret and Bill and everybody else who has made ASLOK such a great place to be.

AP12 comes with one board, board 73, one of three boards created by Bill Sisler and submitted to MMP (the other two will supposedly come out in a future MMP product).  Unfortunately, of the three boards, it is probably the weakest.  Virtually the whole board is taken up by an expanse of orchard hexes, with the occasional field or pond thrown in.  It is very similar to the “bottom” half of board 35–which itself is not used very much.  Without overlay work, the board will probably not be very useful to scenario designers.  Indeed, the designers of AP12 themselves could find it in them to use the board only a few times–the majority of scenarios in the pack do not use the included board at all, the first time that this has happened since Action Pack #3: Few Returned, which was not originally designed as an Action Pack.  This raises the possibility that AP12, too, was not originally designed as an Action Pack, but was similarly converted into one.

The scenarios are a relatively even mix of small, medium, and large scenarios.  One scenario uses Air Support, two scenarios utilize the Night rules and a whopping half of the scenarios have OBA (actually, depending on a random dr, possibly 6 of 10).

One of the more exotic scenarios in AP12 is AP120 (Kingston of the Hill), which is the Korean War scenario–MMPs first venture into that conflict.  This is a lengthy 9-turn Night scenario (which may turn off some prospective players) pitting a large attacking force of North Koreans against a tiny group of American defenders.  The North Koreans start with 10 3-3-7 squads that are soon joined by 10 5-2-7 squads.  The following turn 10 1-0-6 unarmed squads enter, hoping to grab weapons off of the dead bodies of others.  Against this, the Americans have two (2!) .50-cal MGs, 3 MMGs, three mortars (2 x 60mm, 1 x 81mm) and some 100mm OBA.  To win, the North Koreans need have only a single Good Order MMC on a Board 25 Level 3 hill hex, which means that most of the Koreans are likely to be slaughtered in any playing, win or lose.

The other night scenario is also the other non-World War II offering, AP111 (The Katanas Come Out at Night), which takes place during the 1938 Changkufeng border conflict between Japan (in Manchuria) and the Soviet Union, a conflict lesser known than the one at Nomanhan the following year.  In this scenario, 21 elite and 1st-line Japanese squads (and a generous 7 leaders) attack a Soviet hill position defended by 21 squads, 2 tanks and 2 MTR.  The Soviets also get a bit of OBA.  Most Soviet-Japanese scenarios are set in 1945 and are rather one-sided in nature (as the Soviets handily defeated the Japanese in Manchuria in 1945), so this offers a more even playing field, but the Night nature of it will inevitably mean that it is played less often.

Mildly exotic is AP112 (First Ally), which depicts the Slovak incursion into Poland in 1939 as Hitler’s henchmen.  One may be forgiven if one confuses it with the similar OB1 (Riding the Coattails) from Out of the Bunker.

The other scenarios are more standard fare.  One of the scenarios that actually uses Board 73 is AP113 (Maintaining the Box), a PTO scenario which features a Japanese attack on a small British position followed by a massive British combined-arms counterattack.  AP115 (Bats Outta Hell) is another PTO scenario that uses Board 73 (which in the future will also mostly be used for PTO scenarios as well).  This Central Pacific scenario features a large Japanese attack (18 squads and 12 tanks) against a force of 9 7-6-8 USMC squads with two 37LL AT guns–and 8 Shermans as reinforcements.  One can almost smell the bloody Japanese corpses, a notion reiterated from the unusual victory conditions, which, simplified, provide the Japanese a victory simply for not losing too many guys.  The dynamics of the VC, which provide various exit VP as well for incentive to actually move, may result in some odd playings.  The Japanese AFV are themselves worth 60VP total and they are extremely vulnerable either on the attack or defense, so regardless of what else happens, the Japanese player may have to play as though the US player already has 60VP, with any odd surviving Japanese AFV being gravy.  This would mean that the sides would essentially be playing more for the seemingly secondary “incentive” exit VP than for anything else, with the Japanese trying to exit more infantry than the Americans can kill.  It might end of being one of those scenarios the dynamics of which are not generally understood until after the first playing.

Two of the meatiest scenarios in the offerings are both East Front city fights.  The first is AP117 (Second City), an action that takes place lengthwise on Board 68.  It features 16  Soviets squads and 4 AFVs against 8 Hungarian squads, a 20mm AA gun, and 2 AFVs, with 5 German elite squads and 2 Panthers arriving as reinforcements.  The scenario divides the board into various city “blocks;” to win, the Soviets must control 5 of the 8 blocks.  They must make hay while there are only Hungarians on the board.  However, the scenario has a twist typical of Pete Shelling designs–the 2 Panthers were hastily sent from repair shops, so each of them will have a randomly selected “defect” (such as having fewer MP or a lowered ROF) that makes them a bit less fearsome than usual.

The second scenario is AP119 (Konev Cross), a Berlin 1945 scenario.  The German defenders have a typical motley crew that ranges from 4-3-6 conscript squads to 6-5-8 SS squads.  They have 3 88mm guns, plus a possible 4th (as their OB is partly random).  They also get a random benefit, such as Soviet OBA hitting friendly targets, Soviet planes being more likely to make Mistaken Attacks, a Soviet Bombardment hitting friendly targets, or the appearance of a horde of Hitler Youth units (represented by Italian crews).  Against this, the Soviets have 20 squads, 5 leaders (4 of them “minus” leaders), a plethora of SW, and 10 nasty AFVs and 2 AT guns.  To win, the Soviets must kick ass and take names.  Or, rather, exit stuff and take buildings.

AP12 has a number of interesting actions, though OBA may be too prevalent for the tastes of some ASLers (opinions vary wildly on this subject).  Board 73 is definitely not very exciting.  Overall, though, it is a nice way to honor a great ASL tournament and tradition. 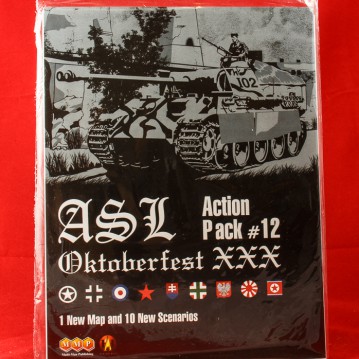