The original Swedish Volunteers debuted in 2009 to general applause, not only for the high production values but because most of the scenarios were playable and fun. Almost as soon as it was released, there were requests that MMP obtain and reprint it.  This did not seem very likely, but in 2011 MMP hinted on Consimworld that it would in fact be reprinting Swedish Volunteers and officially confirmed the fact the following year, saying it would come out in the “not-too-distant future.”  Well, eight years later is pretty distant but MMP was true to its word.

In any case, SV2 does NOT contain any geoboards, new or old.  It is simply a scenario pack, accompanied by a few rules pages (actually mostly historical commentary and designers’ notes, not rules) and a half sheet of counters.

The eponymous Swedish Volunteers were Swedes who volunteered to fight for Norway during the Nazi invasion of that country in 1940 or for Finland during its 1939-40 or 1941-44 wars with the Soviet Union (it does not include Swedes who joined the Waffen SS).  For most of this period, the number of such Swedish volunteers numbered only a few hundred (or less) and they also did little fighting, so the scenarios here represent pretty much every action that could have been squeezed from the history books.

The original Swedish Volunteers contained 14 scenarios; SV2 actually bumps that up to 16 scenarios, so there is a reason for owners of the original product to purchase SV2 (if they were looking for such a reason).  Some of the original 14 scenarios have been altered as well, for errata or balance reasons. The scenarios also now are written using MMP’s standard scenario conventions.

Like the original product, SV2 comes with a half-sheet of counters, though it omits a type of machine gun included in the original countermix. MMP rationalizes this exclusion by saying that the MG had since been printed in Hakkaa Päälle!, which it had, though obviously not in Swedish Volunteer colors, so this was a less than helpful decision.

Perhaps more importantly, the SV2 Swedes appear in a different color than the Swedish Volunteer Swedes.  The original counters gave the Swedes an attractive blue on white color scheme, one that nicely reflected their northern nature. However, MMP threw that baby out the window and instead rendered the counters as black on a shade of blue slightly darker than their German blue.  This was an unfortunate decision explained away by the rationale that white counters in ASL are reserved for informational counters and that this might be “confusing” to people.  It’s not clear how many ASLers could possibly confuse a squad with an info counter (and, in the 11 years that Swedish Volunteers has been played, it’s not clear a single person ever did get confused) but even if one accepts this rationale, there were better and more distinctive options than what was chosen.  For example, the Swedes could have been portrayed by white on blue counters or yellow on blue counters (their national colors).  The turn marker provided on the countersheet is yellow on blue and illustrates how nice such counters would have looked.  As it is, they are rather drab–and could even be confused with some of the off-color blue German counters that have appeared in certain ASL products.

The scenarios of SV2 are described or characterized in the write-up for Swedish Volunteers, except for the two new scenarios. The new additions are AP148 (Beacon of Hope), a tiny Norway 1940 scenario, and AP153 (Across the Rio Grande), the latter of which is a reprint of a tiny East Front scenario that originally appeared in Friendly Fire Pack 10.

SV2 is certainly more of a niche product than MMP would typically publish, and the MMP choice of counter colors is not as nice as the counters of the original, but the original was a product well-regarded by many (including Desperation Morale) and there is nothing in SV2 that would alter the play value of the original, so it would be a worthy purchase. 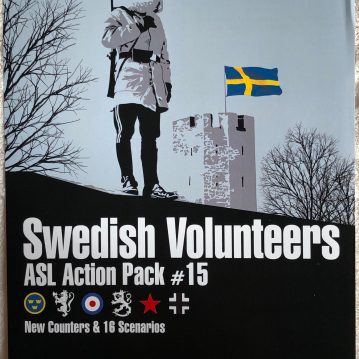