Deep in the Amazon rain forest, there is a rare small bird, the kirikut, a distant relative of the tropical parrot, who only lays a single tiny egg once a year.   Because of the odd diet of the kirikut, the egg is formed covered in the thinnest layer of intricate crystal latticework, as if a million tiny mites had constructed a beautiful scaffolding around the entire egg.  The exquisite beauty of the kirikut egg has led to its becoming more than three thousand times more valuable than even the rarest type of pearl.  The rugged and remote habitat of the endangered kirikut, whose population is estimated to number fewer than 300, combined with the tiny number of eggs laid each year, has made the kirikut egg the single most valuable biologically created object in the world.  Professional kirikut hunters, licensed by the Brazilian government, consider themselves lucky if they find three eggs in their entire career–yet finding even a single egg can support them and their families for life.  Lucky is the person who ever even gets to see a kirikut egg in his or her lifetime.

While many of the unwashed masses of the ASL world have never even heard of Friendly Fire, ASLers “in the know” eagerly await each year’s release of Friendly Fire, because experience has shown that the scenarios are likely to be interesting, varied, well-researched, well-playtested, balanced, and fun to play.  The previous iteration, for example, Friendly Fire Pack 9, contained not a single dog.

About half the scenarios in the pack are small (most Friendly Fire scenarios are intended to be tournament suitable), with a couple medium- and large-sized scenarios each.  The scenarios use geoboards 38, 41, 42, 47, 49, 55, 62, 67, 68, 7a, 9a, FrFA.  That last one is Friendly Fire Board A, which appeared in Friendly Fire Pack 6.  One of the scenarios also requires counters and rules from the Bounding Fire Productions product Blood and Jungle.  No scenarios have OBA or use Night rules; one scenario has Air Support.

As is inevitably the case with Friendly Fire packs, there are a number of interesting actions portrayed here.

FrF78 (No Glory in War) is an East Front action in which a small German combined arms force “on the move” (with 9 squads riding 9 tanks) runs into a Soviet counterattacking force of infantry and light tanks.  This is essentially a “tin can” shootout in which both sides must form and execute a plan on the run–there is no elaborate defensive set-up here, nor a carefully calculated attack.  ASLers who like improvisational play might well like this scenario.  Not surprisingly, it has so far proved the most popular (and balanced) scenario in the pack.

Also interesting–and educational–is FrF77 (Ghostbusters), a France 1940 scenario.  ASL scenarios on the France 1940 campaign disproportionately concentrate on the German drive to and across the Meuse, largely because the English-language literature on the battle for France tends to neglect the rest of the French Army’s fighting.  However, this scenario represents a slice of the hard fighting done by the French Army in 1940, depicting a bloody nose given to Rommel’s 7th Panzer Division (the “ghost” division; thus the scenario name).  Most World War II buffs are unaware that during the six short weeks of the French campaign the Germans lost fully 1/3 of their tanks; this scenario, depicting an action in which the French tore up an advancing German armored force, illustrates how so many tanks could be lost.

FrF81 (Across the Rio Grand), which incongruously takes place in the northern Soviet Union, is a tiny action that pits Soviet troops against Swedish volunteers fighting for the Nazis; it uses rules and counters from the module Swedish Volunteers.

Friendly Fire scenarios are often said to be designed for advanced players; sometimes this is due to the fact that one side or another may need to use advanced or obscure tactics in order to win; sometimes it is because SSRs are numerous and/or complicated.  FrF83 (Phantom Army) is one of the latter, but it provides a good exotic feel thanks to its representation of so-called “Seydlitz troops.”  Walther Kurt von Seydlitz-Kurzbach was a German general, captured by the Soviets at Stalingrad in 1943, who disillusioned by his recent experiences, began to cooperate with the Soviets.  He  formed the League of German Officers and took part in Soviet anti-Nazi propaganda efforts.  By the end of the war, ostensibly a small number of former German POWs were used in combat with intent to deceive or infiltrate behind the lines–however, documentation and proof of this is extremely hard to come by and largely seems to be a combination of Nazi propaganda and soldierly paranoia (equivalent to that of the Americans in the Battle of the Bulge).  Often even Soviet soldiers speaking a few taught lines of dialogue (like orders to surrender) could be mistaken by panicky German soldiers as “Seydlitz troops.”  FrF83 (Phantom Army) represents an attack that allegedly included Seydlitz troops that appears in some of the literature about the final Soviet offensive to take Berlin.  The scenario accepts the notion of Seydlitz troops and provides SSRs that allow them to “Mislead” German troops or to “Cancel” German fire attacks.

Overall, Friendly Fire Pack 10 looks like another solid effort from the multinational team of folks who design, playtest and produce these packs. 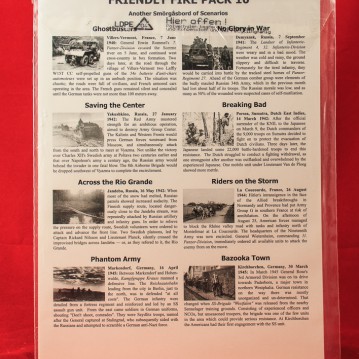