2nd Edition (The Fox Strikes Back Pack B); 8 scenarios

Afrika Korps-Second Time Around (AK-STA) is a supplemental scenario pack for Afrika Korps-El Alamein, a “core” module of CH’s multi-part Afrika Korps series; see that product for project history and details. AK-STA cannot be played without AK-EL, though this is not clearly stated on the product’s packaging. All 8 scenarios, for example, use the “Tobruk” map that only comes with AK-EL.

The scenarios in AK-STA all take place between November 1942 and May 1943 in Tunisia; all of them feature the British/Commonwealth (making AK-STA essentially the counterpart to the third scenario pack, AK-Bitter Enders, the scenarios of which also take place in Tunisia but feature American troops). The scenarios all use a large, non-geomorphic desert mapboard (included with AK-El Alamein), usually populated with a number of overlays.

All of the AK-STA scenarios are converted versions of scenarios originally designed for the ATS system; as such, they tend to be smaller than the typical ASL scenario. Almost all of the ASK-STA scenarios are small in size by ASL standards, but thankfully they are not all too small (as was the case in AK-Benghazi Handicap). However, a better mix of scenario sizes would give the scenario pack more play value; as it is, the pack has nothing to offer people who like medium-sized or large scenarios.

SSRs are typically few in number. One scenario uses OBA; there are no scenarios that feature Night rules or Air Support.

A couple of the scenarios seem interesting. AK#32 (Blunted Blade) features a British force of 8 squads and 8 AFVs trying to take on a blocking force of 4 Italian squads with an HMG, two guns, 2 assault guns and a very nice platoon of German reinforcements (complete with a 9-2 leader and a hero). Both sides get to use some less-used vehicles (including Semoventes, Crusaders, and AEC Is). AK#33 (Jebel Achkel) is an all-infantry action featuring an Indian attack with 10 elite squads against a hill occupied by 8 German squads with some nasty MGs, an 88mm gun, and an 81mm mortar. The British are not expected to take the whole hill, just control more Level 2 hill hexes than the Germans.

Overall, though, it is not the most exciting of the AK packs.

It should be noted that, as of a month or two after the release of the 6 AK products, there has been a fair amount of errata for them. As of mid-August 2010, as far as AK-STA is concerned, AK#29 has had its original scenario cards replaced with a 1.1 version. Presumably the earliest released copies had the original version; players whose copy of AK-BE do not have version 1.1 cards for this scenario should contact Critical Hit.  Before playing, attempt to find latest errata.

Second Edition (The Fox Strikes Back Pack B) comments:  In 2014, Critical Hit did a sort of quickie cheap release of Afrika Korps-El Alamein, replacing the original large desert map with copies of a generic desert geoboard.  It released two scenario pack conversions at the same time, dubbed A and B.  The Fox Strikes Back Pack B simply consisted of the 8 Second Time Around scenarios reconfigured to be played on the geoboards rather than the original large desert map.  The Fox Strikes Back Core Pack is required to play these scenarios, just as Afrika Korps-El Alamein was required for the original.  Ostensibly, errata found in the original edition was fixed in this edition, though the map conversions have the possibility of new errata.  The pack is priced at $19.95 for 8 scenarios. 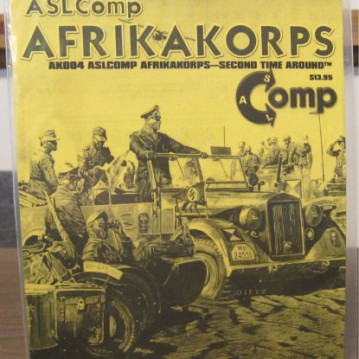