All American: Kellam’s Bridge (AAKB) is the first of a series of three modules by British ASLer Ian Daglish depicting the actions of the 82nd Airborne Division in Normandy on D-Day.   Its small (and fastidiously researched) historical map is dominated by a large marsh straight down its middle.  Only a narrow causeway crosses it, and the battles of this causeway and the surrounding territory are the theme of this module.

Without a campaign game, players have only the module’s 10 scenarios to consider.  They do not represent the air/glider drops themselves, or any actions that night (the only night scenario in the module actually takes place on June 8), but rather actions from the morning of D-Day through June 9.   Most actions represent American airborne (and occasionally glidermen, represented by 6-6-7 squads) fighting against mediocre German troops who are sometimes backed up by old captured French tanks.  The scenarios tend towards the small size; of them, AA1 (The Milling Crowd) and AA2 (Ambush at Cauquigny) have had the most play and seem well balanced.

2nd Edition Commentary:  Airborne Stand, the 2nd Edition of the module, was produced after a new version of the map was printed to include in an ATS game on the same topic.  The new map includes not only all the terrain from AAKB, but also the southern part of All American: Timmes’ Orchard.  As Critical Hit has done in so many other cases, it re-used the map for an ASL compatible product.  In this edition, the scenario cards are printed on cardstock rather than glossy paper, but the booklet with historical and designer’s notes was not reprinted.    Somewhat inexplicably, though the scenarios in the 2nd Edition seem to be the same as in AAKB, they are all given different names (this would soon become standard operating procedure for Critical Hit).

A map of this terrain also exists with a copyright date of 2006, which might have been created for an ATS version of this product.

3rd Edition Commentary:  In 2011-2012, Critical Hit began a campaign of hastily renaming/recycling/re-releasing virtually its entire catalog.  Kellam’s Bridge II was one of the products of this burst of rehashing, published after the 2011 death of original designer Ian Daiglish.  The map included is the 2006 map (an okay map at best), with no apparent changes.  The 8-page rulebook is actually mostly historical material and designer’s notes, with only one page of actual rules.  Bizarrely, the scenario cards are printed on green cardstock, with no explanation for this.  The scenarios include the original 10 scenarios, plus the 2 additional scenarios introduced in the Airborne Stand version.  This version also includes a countersheet, but it is essentially superfluous, providing no new counters (i.e., all of the scenarios are playable with the official counterset), and was included merely to increase sales (because some ASLers are more likely to buy a product if it contains counters).   The majority of the counters are simply American MMC/SMC.  In any of its iterations, Kellam’s Bridge is just an okay product, but Normandy or airborne fans might be more inclined to purchase it.

4th Edition (i.e., All American I) Commentary:  Critical Hit’s business model relies on recycling its old product as quickly as it can, so it is no surprise that a new edition of this module would appear only a couple of years after the previous edition.  On the cover, this edition is dubbed the “Last Word Edition,” but if you believe that, I have a Last Word Brooklyn Bridge to sell you.  The main difference between this edition and the previous edition is that the newer version includes Critical Hit’s new type of map:  a map constructed of 12″ x 18″ glossy heavy paper/light cardstock map panels, which must be assembled to create the map area.  The assembling is a pain, as is the glare from the glossy stock, but the colors are vibrant.  The hexes are larger as well.  The product dubs the maps as having “retro terrain.”  Generally speaking, something “retro” means a design that hearkens back to the look of an earlier era.  When Critical Hit uses the term, however, it means “we just recycled our old graphics.”  So its the old map graphics on new map paper, essentially.  It comes with a small number of counters, none of which are needed.  At $69.95 for this much-retreaded and not all that great product, this can safely be avoided by most ASLers.

5th Edition (Super Deluxe Kellam’s Bridge) comments:  As noted above, there was absolutely no chance that the 4th edition of this product would be the last version of the product, because Critical Hit has chosen a business model which requires them to constantly recycle all of their old products and try to sell them again.  Indeed, this 5th edition comes only a year after the so-called “Last Word” edition–and you can be sure that Ray Tapio will try to force feed this product to you again in the future, with some other cosmetic change (and title change) as a draw.

The fact is that Critical Hit is rapidly running out of ways to repackage and resell its intellectual properties.  This can be seen in the 5th edition of Kellam’s, where the sole difference and sole selling point is extra-fucking-big hexes, taking a very manageably-sized historical map and making it totally unmanageable, even more so than the 4th Edition.  One must also keep in mind that this is a very low counter density product to begin with, as well as an extremely low vehicle product, so there is absolutely no reason for “super deluxe” sized hexes–the few counters on the map practically swim in them. 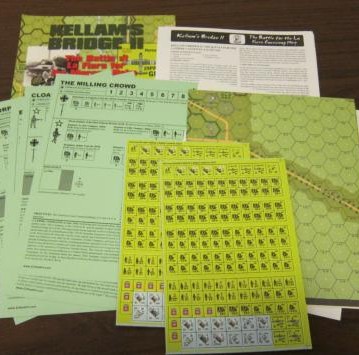