All American: Timmes’ Orchard (AATO) is the second of a three-part series, designed by Ian Daglish, that depicts the actions of the 82nd Airborne Division in Normandy on and shortly after D-Day.  It features a historical map, which overlaps with its predecessor, All American: Kellam’s Bridge (AAKB).  It features 8 scenarios on cardstock.  They have an attractive scenario card layout on green cards that was not repeated in the third All American module, meaning that each of the three modules has scenario cards different in appearance–a perfect example of Critical Hit’s consistency problems.  The scenarios depict actions from June 6-9 in Normandy, though none depict the airdrop itself.

Like its predecessor, AATO features scenaros that tend to be small to medium sized, although there are larger scenarios than in AAKB.  Only one uses the entire map (although another one does use part of the AATO map and all of the AAKB map).  There is only one night scenario; only two scenarios have any vehicles.  There are also two SASL missions, AA Mission 1 (The Gathering) and AA Mission 2 (Luftlande!).  Overall, it is an attractive product.

3rd Edition (i.e., Timmes’ Orchard II) comments:  This reprint is also for some reason labeled the “Final Countdown Edition,” which seems meaningless.  The 3rd Edition is mostly identical to the 2nd edition.  It has the same map and the same scenarios, though they are all marked “ver 2.0,” which means they may have been tweaked (either randomly or for balance/errata; Critical Hit does both).  The 3rd edition does not include the booklet that appeared in earlier editions (though the Critical Hit website claims that it does), but includes a generic airborne countersheet that originally appeared in Kellam’s Bridge II.  These counters are not needed to play any of the scenarios and offer no improvement over official counters.  There is no real reason for someone who owns a previous edition of this module to get the third edition, especially given its $49.95 price tag.

4th Edition (All American II) comments:  The third edition of this product was dubbed the “Final Countdown Edition;” this fourth edition is described as the “Last Word Edition.”  The odds of it being the last version of this product are slim to none.  All American II is not very different from the previous edition, with most of the differences being cosmetic.  The main difference is that the maps are now printed on 6 12″ x 18″ light cardstock/heavy paper glossy map panels, which must be assembled to form the map (a pain).  This is now standard procedure for Critical Hit, but polarizing to the ASL audience.  The counters, as before, are completely gratuitous (and note that not a single one of the counters displayed on the cover of this product actually come with the product, which is a bit of false advertising).  The rules pages and scenarios cards have a higher quality print job.  Overpriced at $79.95 (notice the huge price hike from the previous edition), there is no reason to obtain this edition if you have any previous edition.

5th Edition (Super Deluxe Timmes’ Orchard) comments:  As noted above, there was absolutely no chance that the 4th edition of this product would be the last version of the product, because Critical Hit has chosen a business model which requires them to constantly recycle all of their old products and try to sell them again.  Indeed, this 5th edition comes only a year after the so-called “Last Word” edition–and you can be sure that Ray Tapio will try to force feed this product to you again in the future, with some other cosmetic change (and title change) as a draw.

The fact is that Critical Hit is rapidly running out of ways to repackage and resell its intellectual properties.  This can be seen in the 5th edition of Timmes’, where the sole difference and sole selling point is extra-fucking-big hexes, taking a very manageably-sized historical map and making it totally unmanageable, even more so than the 4th Edition.  One must also keep in mind that this is a very low counter density product to begin with, as well as an extremely low vehicle product, so there is absolutely no reason for “super deluxe” sized hexes–the few counters on the map practically swim in them.

The countersheets included in this edition are a rip-off, consisting almost entirely of American leader counters. 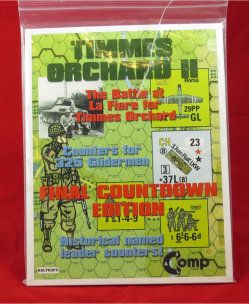