Baraque de Fraiture, 2nd Edition (BdF2), is somewhat odd in the ASL world, as it is the second edition of a product that was originally published in 1996 by another company (in this case, the now-defunct Front Line Productions).  In the broader wargaming world, larger (in a relative sense) sometimes purchase products of more obscure companies and give them a polishing and a wider distribution.  This also happens with ASL scenarios and even the rare ASL product (Soldiers of the Negus, for example, was picked up and reprinted by Critical Hit).  However, BdF2 is the first time this has been done with a historical module, leaving aside the unusual circumstances behind Blood Reef: Tarawa.

The original Baraque de Fraiture, a small historical module depicting a hard fought action during the Battle of the Bulge, was produced by Front Line Productions; indeed, it was the only product ever released by Front Line Productions (its second project ended up being the MMP-published Operation Watchtower).  One of the BdF scenarios was later reprinted in MMP’s Out of the Attic.

Thus is was with a bit of surprise that ASLers learned that Critical Hit was printing a new edition of the old FLP game module.  However, the project’s origins go back some time.  When BdF was originally released, some European ASLers criticized the historical map in the module as not depicting accurately enough the battlefield terrain (a common refrain from European ASLers, who have many of the battles in their own backyards).  Belgian ASLer (and frequent Critical Hit contributor) Pedro Ramis and American ASLer Brian Martuzas wrote an article for Critical Hit Magazine in 1997 (Volume 4, Number 2) highlighting what they thought were the shortcomings of the BdF historical map (this article is reprinted in BdF2).

A decade later, BdF2 emerged with the notion of creating a revised version of the historical map that would reflect the terrain more accurately.  The new edition contains essentially the same components as the original edition:  a rules and historical overview booklet (slightly expanded), 9 scenarios, and a historical map (at 22″ x 36″, slightly larger than the original).  Some of the scenarios have been tweaked slightly to improve play balanced based on the play result records of the original scenarios.  The scenario cards also have a new layout, of course (the original edition had scenario cards that impermissibly used “official” ASL artwork and styles).  See the World of ASL entry on the original BdF (link above) for more on the scenarios included.

The main difference, though, is in the map.  Actually, most of the terrain on the map is the same as in the original; the major differences include the addition of Slope hexsides in several places, as well as some Level 1 terrain.  The artwork is also different (use the link above to compare the original with the 2nd edition map shown below).  The 2nd Edition artwork has a darker, gloomier palette that some might find not as attractive as the crisper, brighter original.

Whether BdF2 represents a significant improvement over the original is open to question, but it is nice to see this product, out of print for some years, available again to gamers.

Note: the booklet that comes with BdF2 includes several “BdF Play Notes,” one of which is incorrect.  It “reminds” people that the presence of Snow precludes the use of most types of SMOKE.  However, this is not true.  Only Deep Snow has those effects on SMOKE, not Ground Snow.  This is important, because some BdF scenarios have Deep Snow, while others have Ground Snow.

The counters are entirely gratuitous, adding nothing new to the system, and nothing else about this edition was changed, except for a few stylistic changes, so owners of the previous version do NOT need to get this version.  They will miss nothing from it.

4th Edition (Parker’s Crossroads: Baraque de Fraiture) comments:  In 2015, Critical Hit issued yet another new and different version of the Baraque de Fraiture module.  Dubbed the “Large Hex Edition,” the 4th edition most certainly has big-ass hexes.  This is because the original historical map–printed on a large, folded sheet of paper, has now been replaced by 9 12″ x 16″ glossy unmounted map panels, which have to be assembled together to form the historical map.  One of the virtues of the original BdF was that it was a historical module with a conveniently-sized map; that is now gone with the new version.  One presumes that the map area would not fit one only 4 panels, so Critical Hit used 9 panels and blew the hexes up to fill the new map area.  The result is a pain in the neck, as experience has shown that trying to assemble a map out of more than 4 panels can get  irritating.  The map is also billed as being “winterized,” which typically means that the terrain is depicted as being snow-covered.  Open ground is grey-white rather than green, and level 1 is now grey, and the roads have patches of snow on them.  Other terrain remains the same, so the woods and brush hexes have no snow on them, they just appear, oddly, in a slightly different shade of green.

5th Edition (Parker’s Crossroads “Feldgrau/Olive Drab” Edition) comments:  Only a year after the 4th iteration of this product, Critical Hit threw out another edition, making this one of the more reprinted Critical Hit products despite Critical Hit having had the rights to it for only a decade. There are substantial differences between this edition and the previous edition, though they are not all necessarily improvements. One of the biggest changes is that Critical Hit threw out the “Large Hex” map of the 4th edition, a map that was simply impractical to play on, and returned to a more manageable map size that uses only 4 of the 12″ x 18″ glossy map panels instead of the previous 9. This change, at least, was a definite improvement. The map art appears to be the same as that used in the 4th Edition, only smaller in size.

This edition also once more includes counters–a huge number of them, even though this product can be played using only official U.S. and German counters, so they are all essentially gratuitous and add considerably to the cost of the product ($69.95). One full sheet (280 counters) and one half-sheet (140 counters) depict German infantry MMC, SMC, and SW as well as some Waffen SS squads as well.  Another sheet and a half do the same thing for the Americans. Finally, two 5/8″ half sheets (176 counters total) provide some American and German AFVs and Guns.   These sheets are all generic sheets rather than being provided specifically for this game, so many of the counters (such as the five M4 Sherman Dozer tanks) are not used at all, while other American Guns and AFVs actually called for by the countermix do not appear in the scenarios!  The same is true for the Germans; for example, 30 6-5-8 Waffen SS squads are provided, while one of the scenarios calls for 33.  Several scenarios have Panthers, but the countermix provides none.

Theoretically, one can dip into one’s collection of official counters to make up the difference, but this defeats the purpose of having these counters in the first place.  This becomes even more obvious when one realizes that there is another huge difference about the counters in this edition:  they are not standard ASL colors.  Instead of the traditional bright green for U.S. counters, all the American counters in this module have a dark Olive Drab background color.  Similarly, instead of the traditional German blue counters, this product contains only German counters that are a light gray (Critical Hit mistakenly dubs this color “Feldgrau,” but it is not even that, as Feldgrau is a gray-green color).  This means that if players do use official ASL counters, as they must, they must either use all official ASL counters, rendering the included counters here useless, or must use two different sets of counters, each with their own distinct colors, for both the Germans and the Americans. It simply doesn’t make any sense.

It is worth noting that the die cutting for the counters, especially the 5/8″ counters, is not very good.  The drab greens and grays of the “alternative” counters also don’t stand out very well against the drab gray and green map, either.

Two of the scenarios, BdF4 (Hot Breakfast) and BdF9 (On the Outskirts of Freineux), are significantly altered from previous versions.  These were the two scenarios in the product that used geomorphic boards rather than the historical map.  In this edition, Critical Hit dropped the geoboards and replaced them with large non-geomorphic generic maps (dubbed FV1 and FR1).  These boards are also winterized. One of them is derivative of a very similar board that appears in Low Vosges Nightmare, released around the same time, or vice versa.  One of the boards is simply a modified version of the other, rather than being a wholly original board.  That’s just lazy.  There is no evidence that these scenarios were re-playtested with the new boards.  Leaving aside arbitrary decisions, or the idea that including “bonus” boards might increase sales (including re-purchases by people who already owned the product), there are two possible reasons why this might have been done.  One reason is that Critical Hit has been steadily, though inexplicably, been moving away from using official geoboards at all, replacing them in many of its products with boards of its own.  It is not clear why Critical Hit has been doing this.  The second reason may be more related to this specific product, which is that MMP actually published the two geoboard scenarios from BdF in its publication Out of the Attic. Thus Critical Hit might have made more substantive changes with these scenarios to avoid potential copyright issues. Again, it’s not clear.

2019 Update: In 2019, Critical Hit released for separate purchase a “Winterized Monster Map Set” for this product, which is simply a larger version of the Winterized version of the historical map. It also released an “Uber Winterized Monster Map Set,” which provides a map with even larger hexes (highly impractical). Both of these accessories come with what Critical Hit describes as a “Freineux Bonus,” though it doesn’t explain what it means by that. It is likely that this means that geoboards FV1 and FR1, which Critical Hit created for one of its editions of this product, are included, as they were made for scenarios at Freineux. However, it is not clear if they too are magnified or if they are just standard-sized reprints. 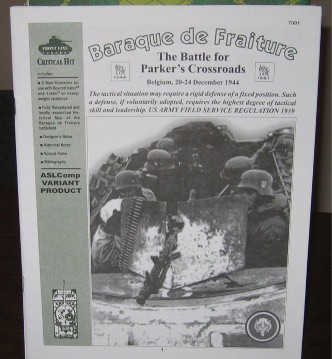