Battle of Gazala Monster is an unusual product.  In essence, it is a re-tread of one of Critical Hit’s various previous desert modules, but it and its sister product, Battle of El Alamein Monster, have a few significant differences.

Critical Hit began publishing desert modules and packs not for ASL but for its other tactical game system, the ASL clone known as ATS, which ostensibly was in part derived from a 1970s tactical game called Tobruk.  Some years later, in 2010, Critical Hit decided to port its ATS desert products into ASL with a dozen or so releases typically called the Afrika Korps series.  This included one pack specifically on Gazala, from which this product was derived.  The “hook” was that these products did not use the traditional geoboards of ASL but rather used a few much larger desert maps on which terrain would be “created” through a great many overlays.

Only one year later, Critical Hit returns to the scene of the crime with Battle of Gazala Monster and Battle of El Alamein Monster, which replace the 8″ x 22″ desert geoboards with 11″ x 16″ geoboards (and with which Critical Hit seemed to be enamored of in 2015, releasing a great many).  The accompanying scenarios are not described as original and design credits are given to the designers of the “originating scenarios,” i.e., the versions these scenarios are based on.  The designers mentioned include Harold Hock (so presumably some of his old scenarios were recrafted), Pat and Fred Hair (who long ago submitted a host of desert scenarios to Critical Hit before disappearing from the ASL scene), and Pedro Ramis, Kurt Martin and Philippe Leonard, who originally designed ASL products but then started working on ATS.

The two pages of rules lay out the unusual aspects of the product.  First, there is an expressed hope by Critical Hit founder Ray Tapio that players “possess a spirit of experimentation and creativity.”  This is language typically used by Critical Hit when its products are underplaytested or underdeveloped–and should be taken as a warning.  Similarly, it also seems to implicitly suggest that solitaire gamers and “two or more gamers sharing a military-history interest” are who this product was designed for–in other words, not for ASLers who seek competitive and balanced scenarios.

Moreover, Critical Hit announces, for most scenarios in the product, “scenario length is ‘taken out of the equation,'” in that the scenarios have huge scenario lengths–15 to 25 turns–that are probably more than enough for one side or the other to be totally wiped off the map.  Combined with this is the fact that most scenarios are very large indeed, typically with huge numbers of vehicles, and take place on a very large playing area.

The only actual new rules for Gazala Monster are new OBA rules, including counterbattery fire.  For ease of play, official ASL rules wisely abstract out counterbattery fire for playability purposes–after all, one need only account for the artillery pieces that did fire, not those that did not fire.  However, counterbattery fire appears here in all of its “glory.”  OBA is nastier, too; for example, one can call artillery concentrations that provide for Double Firepower OBA attacks (and easier Critical Hits, too), as well as barrages that quadruple firepower and increase the number of Critical Hits.

Gazala Monster comes with several countersheets of British, Italian and German troops, all of which seem to be duplicates of units/weapons already in the official countermix, but they will come in handy, as most of the scenarios exceed the number of vehicles in the official modules.  As mentioned, it comes with 9 pretty generic 11″ x 16″ desert geoboards in the Gary Fortenberry style (but it should be noted that these boards are much thinner than official ASL geoboards).  The idea of assembling a battlefield by putting together 6 or 8 of these boards does not sound like much fun.   There is also a single sheet of overlays.

Gazala Monster comes with 9 scenarios (not 8, as the back of the product suggests).  They are not original scenarios but are rejiggered from previously printed scenarios.  GM1 (The Clash of Armor), for example, is a new version of AK51 (Clash of Armor).  But instead of 9 turns, it is 15 turns.  And instead of the Germans having 15 AFVs, they have 21 AFVs.  Defending British AFVs are similarly increased by a third.  Similarly, GM2 (The Group Crüwell Feint) is based on AK52 (The Group Crüwell Feint).  But it now has 15 turns instead of 8 turns.  AK53 (Action at Point 171) is now GM3 (Action at Point 171), but the action at Point 171 now takes 20 turns rather than 8.  The attacking Italians and Germans now have 35 AFVs rather than 24.

And so on.  Each of the scenarios of Gazala Monster are basically upgunned versions of the same scenarios from Afrika Korps – Battle of Gazala.

It is hard to imagine very many people preferring these “experimental” scenarios over the originals, so this product is largely only for those ASLers who are so obsessed about the desert that they “have” to have every desert related product. 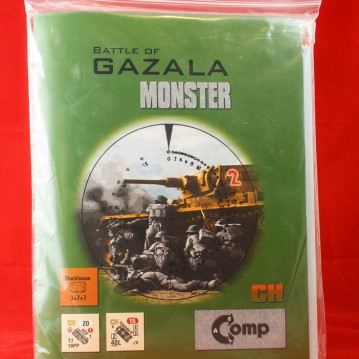