Afrika Korps-Battle of Gazala (AK-BoG) is the second “core” module of CH’s 12-part Afrika Korps series; see Afrika Korps-El Alamein (AK-EA), project history and details. Just as the first “core” module was required to play the subsequent 5 Afrika Korps scenario packs, ownership of this module is required to play the scenarios in the 8th-12th scenario packs. Consequently, though each pack is itself not expensive, the division of this item into six separate parts actually means that purchasers will be spending a significant amount of money to get the whole deal. Moreover, though notice of this fact is buried on the very last line, in tiny print, on the back of the package, players also need to purchase AK-EA in order to play any of the scenarios in this pack or packs 8-12. This means that it will cost a player $130 to play a single scenario from this pack. The total cost for all AK packs is $270, making the collective AK the single most expensive ASL product (as of this writing) since the game’s introduction.

These packs were thrown together quickly, and it is not clear whether or not these scenarios, which are simply conversions of scenarios originally designed for the rival ATS game system, were fully playtested on their own terms. Certainly the first batch of AK packs had more than its fair share of errata; these might as well. Players should check for errata before playing scenarios.

Like its predecessor, AK-BoG contains a large generic map (in this case, two identical copies of the same map that comes with AK-EA), which can be modified by overlays, 14 of which are included. For whatever reason, the overlays are not color-coordinated with the accompanying maps; most have a color that resembles that of the official geomorphic desert mapboards. It is not clear why the game comes with two copies of the map, since none of the scenarios in AK Packs 7-12 use three of the maps, and players are told they need to purchase AK-EA in order to play the packs, so theoretically they would already have a copy of the map.

The rulebook appears to be basically the same rulebook that appears in AK-EA, except that it also includes a reprinted article by Matt Romey that helps players learn desert terrain. Because it is a rulebook created for a different product, it refers to some items, such as 1/2″ counters, which are not actually present in the AK-BoG but which appeared in AK-EA.

The counters that come with AK-BoG are all 5/8″ counters–4 half-sheets total representing two identical sets of 2 half-sheets. The counters are all German, Italian, British and American vehicles and guns, plus one German aircraft counter. The majority of the counters are duplicates of counters that already exist in ASL, but there are a few new vehicle types or variants. Thankfully, the counters appear in the “new” CH AFV/Gun layout style, which replaced the virtually incomprehensible style they had used for years. As a result, they are actually readable and usable.

As the title of the pack suggests, all of the scenarios take place during the Battle of Gazala in May-June 1942. As a result, only the British/Commonwealth, Italians, and Germans are featured, except for one scenario, AK58 (The Fall of Point 186), which features the Free French.

Obviously, for fans of the desert in ASL, the AK packs, warts and all, represent a bonanza of scenario actions that can greatly enhance their enjoyment of this neglected theater.

2012 Update: In late 2012, Critical Hit released Bir El Gubi, a Platoon Leader Campaign Game designed to be used in conjunction with either this product or the original Afrika Korps-El Alamein. It contains a version 1.1 of the Afrika Korps rules, suggesting that changes may have been made to the rulebook included in this product.

2015 Update:  In 2015, Critical Hit published Battle of Gazala Monster, which in essence is a new version of this product, but which has some substantial–and odd–differences, enough that it was given its own separate entry. 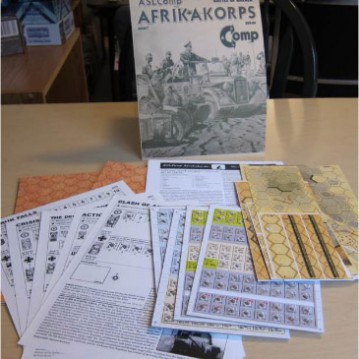