Alternative Titles/Edition History:
In part, this is a new edition of Euro-Pack II.

This ridiculously-titled product is a new edition of Euro-Pack 2, plus additional materials, so to slightly minimize the confusion involved in this oft-reprinted product, it is discussed in this separate entry. Strange even for Critical Hit, Euro-Pack 2 was also reprinted around the same time as Bloody Christmas.

The original Euro-Pack 2 was a Critical Hit pack of 8 scenarios themed on the Battle of the Bulge that were originally printed in the European ASL News newsletter in the 1990s (to which Critical Hit purchased the rights).  Various Critical Hit reprints and variants have added and subtracted various other components or combined them with other items.

The Critical Hit description of this product basically paints it as having the scenarios from Euro Pack 2, except for “Down the Road” (for which another scenarios is ostensibly substituted), as well as 4 geoboards in the unusual size of 12″ x 18″ (the size of one of their standard historical map panels; in 2019, Critical Hit began using these panels for a new nonstandard type of geoboard). It also claims two “bonus” maps, plus 8 “brand new scenarios,” though Critical Hit’s definition of “brand new scenario” and Desperation Morale’s definition are two rather different things, so caveat emptor.  In addition, Critical Hit has thrown in a bunch of American and German countersheets and half-sheets, virtually all of which are duplicates of official counters. Additionally, based on contents reports to Desperation Morale, not all purchasers may get the same sets of counters

There appears to be no indicator that the old scenarios were replaytested for the new maps on which they appear. Nor, it should be noted, is there in general much indication of playtesting in the CH products of this publishing era, so, again, caveat emptor. 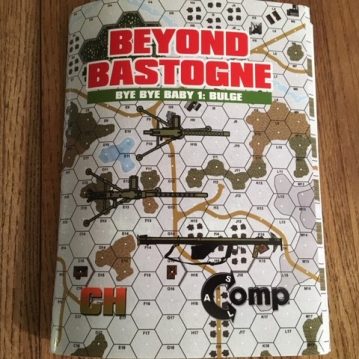