The second scenario pack featuring actions originally published in the European newsletter ASL News (and the odd ringer from the American newsletter On All Fronts), Euro-Pack II features scenarios set during the Battle of the Bulge.   It is not a remarkable pack, but decent scenarios include E-P53 (Fuel Depot #2) and E-P54 (Devils in the Graveyard, which uses the Stoumont map from Kampfgruppe Peiper I).

One scenario, E-P62 (Down the Road…), uses the ASLN#1 board, a “historical” geomorphic mapboard originally published in an issue of ASL News.  Originally, it was obtainable through purchase from Critical Hit or by getting a subscription to Critical Hit Magazine.  Critical Hit briefly made it available for download as a PDF.

This product was “sort of” reprinted in 2011 as Bulge Pak 1; see that entry for details.  It includes a printed version of the ASLN1 map.

4th Edition (Bloody Christmas) comments: In 2018, Critical Hit once more recycled Euro Pack 2, this time a $59.95 animal dubbed Bloody Christmas. Desperation Morale has not yet examined a physical copy of this product. It appears to have the standard 8 scenarios, but unlike the previous edition contains only one geoboard (CH4) instead of two. The board appears in its non-winterized version.

2019 Update:  In 2019, Critical Hit took most of the scenarios from Euro-Pack 2, reworked them again to fit 12″ x 18″ geoboards, combining them with other Bulge-related scenarios in a product called Beyond Bastogne:  Bye Bye Baby 1: Bulge.  See that entry for a fuller description.

5th Edition (Euro 2: Peiper’s Progress) comments:  Euro-Pack II is becoming one of Critical Hit’s most renamed, recycled and reprinted products. The company has gotten more use out of remaking and reselling this product than your average 1980s rock band has from playing its old hits at state fairs. Some 23 years after its first release, Critical Hit once more renamed and re-released this product. Unlike some of the previous editions and variations, this version simply includes the original scenarios.  Desperation Morale has not examined this product, but it is likely the original scenarios are tweaked. 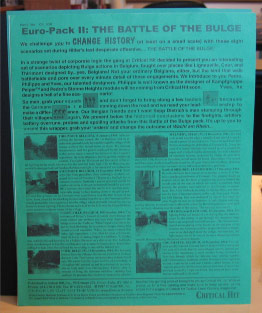