Bulge Pak 1 (BP1) is essentially a hasty reprint of the 1997 release Euro-Pack 2, with some other items thrown in.   It was one of a large batch of Critical Hit reprints released in late 2011.  Euro-Pack 2 itself was a quick reprint of scenarios originally printed in the ASL News and On All Fronts newsletters, so Bulge Pak 1 (the odds of there ever being a Bulge Pak 2 are debatable) is basically a recycle of a recycle.

The names of many of the scenarios were arbitrarily changed, making it difficult to determine the actual origins of these scenarios.  See below for scenario origins and changes.  It is worth pointing out that your humble editor doesn’t get paid to do this shit.  Much else about the scenarios were changed as well, including wholesale replacement of maps.

It is not clear that these new versions were playtested, though they would clearly need to have been, given the use of totally different maps.

The counters in the pack are gratuitous and were not even created for this product; they are leftover counters from a recent Critical Hit historical module.

Two “new” geomorphic maps are included.  One, CH3, is actually a redrawn version of the very first third party geomorphic board, published in the ASL News newsletter.  The artwork is a significant improvement over the original, to be sure.  The other map, CH4, is apparently new; it is a river board with a parallel railroad track.  One or both of these boards are used in most of the Bulge Pak 2 scenarios.  Unfortunately, these boards are part of a number of geomorphic boards designed by Critical Hit in late 2011 and printed at the same time.  Some of the boards are printed at slightly different sizes, which cause line-up problems, but in addition to this, all of these boards seem to suffer from the fact that the map/hexgrid are printed very slightly too small, so that if you line up one hex directly against a hex from another board, the next hex will be imperceptibly “off,” the second hex down will be visibly off, and each further hex will be more and more off-kilter compared to the right-sized board.  The small size also makes the map artwork extend beyond the hexgrid.   It is hard to see how Critical Hit could not have noticed this.  See images below for illustration of this problem.

Overall, this is a disappointing product.  It is even more disappointing when one considers its price–it lists at $69.95!  That basically means that one is paying more than twice the cost of an Action Pack for two miscut mapboards and a passel of scenario reprints.  It is grossly overpriced. 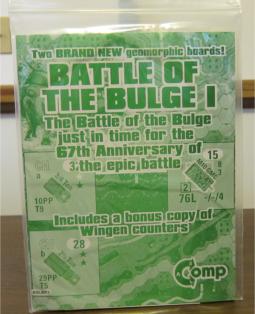