Bloody Buna is a historical module from Critical Hit featuring the struggle by U.S. and Australian troops to take the Papuan New Guinea village of Buna from the Japanese in late 1942. The green American troops of the 32nd Infantry Division, lightly armed (most of their artillery was left behind and they had no armor support), struggled mightily fighting the Japanese (in strong defensive positions) for the first time. They also struggled with the difficult terrain and tropical diseases. Many lessons were learned the hard way at Buna.

In a sense, this module is a complement to Those Ragged Bloody Heroes, an early Critical Hit historical module which featured Australians fighting in the nearby Gona area at the same time. The minimal rules describe it as the “follow-up module” to that product, though it seems quite different in nature and design.

Bloody Buna is also far larger in size.  It takes place on a large historical map that uses a full 20 glossy heavy paper/light cardstock 12″ x 18″ map panels that must be assembled for play. People who have purchased this module have noted that assembling the map can be an arduous task (most scenarios, though, do not require the full map).  Have we mentioned the map is large enough times?  The map (which takes the shape of a rectangle cut into two halves and slightly misaligned) has 50 vertical hexes, while the horizontal hexes go all the way to ZZZZ (i.e., 104 hexrows), giving the product a total of around 5,200 hexes. For comparison, the Red Barricades map has around 1,620 hexes.

Though the map is large and impresses with its size, the map artwork is only so-so, without a lot of detail and containing irritating aspects, such as weird zig-zag against-the-grain airstrips (Critical Hit frequently has a problem portraying runways). It’s not one of Critical Hit’s better maps.

Copies of Buna also contain counters, but these appear to be merely random counters from previously published products. The copy Desperation Morale used for this write-up included a mixed 1/2″ & 5/8″ countersheet originally published in the 2012 Digger Pack I and a different mixed countersheet published in New Guinea I. So there are plenty of Australian counters for this module, which is great, except that 1) only two of the scenarios in this module even feature Australians and 2) the included counters are not sufficient to play those scenarios with Australians.  According to one purchaser, his copy of Buna came with a 1/2″ countersheet of “Japanese naval infantry/sw,” a 1/2″ half-countersheet, and another half-countersheet that has both 1/2″ and 5/8″ counters, for a probable total of 514 counters.  So not all copies of Buna may even have the same counters included.

Buna comes with 9 scenarios. No developer or playtesters are mentioned, which is always a bad sign with Critical Hit.  The scenario descriptions, Critical Hit admits, are cribbed from previously published sources.  In the scenarios, the 32nd Infantry Division–a green division that performed very poorly at Buna, albeit under difficult conditions–is represented way too generously, almost always being give substantial numbers of 6-6-7 elite squads instead of the 5-4-6 and even 5-3-6 squads that would more accurately reflect the state of the division at Buna.  For that matter, though to a lesser degree, the Japanese forces are also often presented as better than they actually were, especially for scenarios set later in the battle when the Japanese had suffered serious attrition and were throwing rear area troops into the line.

The scenarios are overwhelmingly large or very large in size, with only two medium-sized scenarios and one small scenario.  All the scenarios feature the Americans (and/or Australians) as attackers going up against fortified Japanese positions, which represents one of the problems Buna poses as a subject for a historical module (though there times where Japanese counterattacked, this product does not portray any of them).  So the scenarios here have a certain sameness, with most of them involving large numbers of American troops going up against a Japanese fortified position featuring many crew-served weapons (the Japanese crew components for each scenario:  7, 6, 11, 13, 23, 4, 15, 23, 10, 11, 34; the Japanese have more crews than Southwest Airlines). The scenarios have little in the way of chrome or flavor rules, nor special or unusual situations, so there’s not much variety here.  Three scenarios feature pre-game artillery bombardments (a little puzzling, given the Allies shortage of artillery at Buna), while three have Air Support and one scenario uses Critical Hit’s simplified night rules.  One of the scenarios is a “monster”-sized scenario using the whole map, which serves as a substitute for a campaign game. 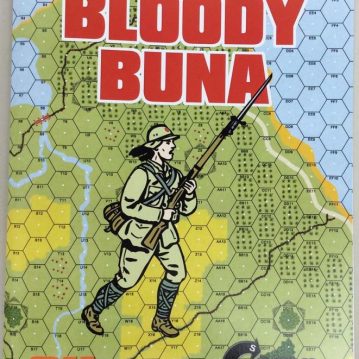