Those Ragged Bloody Heroes (TRBH), like the book of the same name, depicts the 7th Australian Division’s frustrating attempts to take the village of Gona on New Guinea in late 1942 (their American counterparts were having an even more difficult time nearby at Buna).   With only a half-dozen scenarios and a small map, it is one of the smaller Critical Hit historical module offerings.  Nevertheless, as of this writing, it is amazingly the only non-amphibious, non-late-war PTO historical module other than Operation Watchtower.  It is also the only historical module featuring Australian troops.

The map is not particularly well-done.  Not only is it not that attractive, but the vast and unrelenting stretches of jungle and kunai aren’t very interesting, visually or tactically (later designers learned how to include scattered open ground hexsides and other minor terrain variations to make such maps more subtle and interesting).

The campaign game, with only 5 campaign dates, is one of the more manageable campaign games available, although there is not much variety in the purchase options.  The scenarios are all small or medium-sized and easily playable; there are no caves, panjis, paddies, or other complex rules.

The product is adequate, but not great.

The history of Those Ragged Bloody Heroes is mildly controversial.  Prolific ASL designer Steve Swann first conceived of the idea of a Gona historical module, which he titled “Mud & Blood.”  With some research help from Australians Paul Haseler and Mark McGilchrist, he designed the module and submitted it to Critical Hit, where it sat under consideration for quite a while without being published (Haseler and McGilchrist have said that its campaign game was “too static”).  However, in 1997, Critical Hit contacted Haseler and McGilchrist and asked them to develop a Gona module–this became Those Ragged Bloody Heroes.  Steve Swann felt slighted (although there was a later Gona scenario released designed by him); this eventually resulted in a rift between Swann and Critical Hit.

A number of the counters on the countersheet that came with Arnhem: The Third Bridge are actually designed for use with Those Ragged Bloody Heroes.

2nd Edition (New Guinea I) comments:  In 2014, 16 years after the release of TRBH, Critical Hit decided to publish a new version, which it ominously dubbed New Guinea I, as if there will be others.  Unlike many other CH products, which are re-cycled, re-treaded, and re-released far too often (because of Critical Hit’s poor business model), TRBH was actually a product that could use a new release, not because it was a great product–it was not, being only adequate–but simply because there are so few PTO campaign games and because this was out of print for so long that many ASLers would have not had much opportunity to acquire a copy.

New Guinea I (NGI), also dubbed Gona Mission, contains 4 bare-bones pages of rules that provide a few special rules and lay out the Platoon Leader campaign game, CG-I (Mud and Blood).  The rules warn players that “there are some changes of note to players of the earlier edition,” but make no attempt (through highlighting or other signs) to show players what the changes are.  Thanks to new Critical Hit printing equipment, the rules are in color and are much more readable and attractive than their original version.

In addition to the campaign game, NGI comes with 7 scenarios:  the original 6, plus a 7th that originally appeared in the very short-lived Critical Hit On-line newsletter.  This scenario, NGI-7 (Repulsed on the Beach), depicts a night amphibious landing by the Japanese.

NGI eschews a standard historical map in favor of a panel-based one.  The map is printed on 4 12″ x 18″ heavy paper/light cardstock glossy map panels (about the thickness that official overlays have).  The panels, which slightly overlap, must be positioned in order to form the map.  This can be irritating, as can the reflective glare of the glossy finish, but the maps do have the advantage of being brighter and more colorful than older Critical Hit fare.  The original TRBH map artwork was pretty crude; the NGI map artwork is certainly better, but still nothing to write home about.  The same map design was used as in the original; no attempt was made to break up the huge stretches of jungle with any hex or hex-side gaps for variety.

NGI also comes with two half-countersheets.  One depicts “Australian” infantry and is totally unnecessary.  The other sheet also contains a bunch of duplicate counters, but does have a small number of new counters that are actually used with the product.

The main problem with NGI is its cost, because $59.95 is simply too much for ask for a small-map historical module with 7 scenarios and 1 campaign game.

2016 Update: In 2016, Critical Hit reprinted New Guinea I, but it appears to be the same module with just a few slight cosmetic differences, including different folio cover art and an IIFT chart printed on the reverse of the folio. The marketing copy on the CH website claims the module would have a full 280-counter countersheet as well as a half-sheet of 5/8″ counters, but in fact it has the same countersheets as the 2014 version (the marketing copy on the product itself is correct).  Desperation Morale does not count this printing as a new edition. 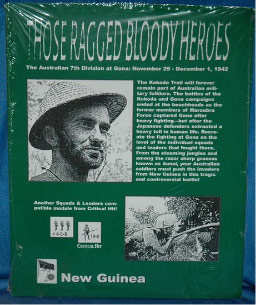