This Platoon Leader campaign game, 6 campaign dates long, features an attack by German paratroopers on Greek and New Zealand troops on the island of Crete in May 1941.

It uses three geomorphic mapboards and several overlays, including some that come with the campaign game. It was originally released as a separate product but was later offered as a free downloadable item (with nicer overlays), though the downloadable version is no longer available, which is a shame, as it was difficult to beat that price.

The main point of interest for Cemetery Hill is that it features a German airdrop and glider landing.

3rd Edition (2014 Edition) Commentary:  In 2014, Critical Hit released a new edition of Cemetery Hill, dubbed the “2014 Edition.”  It was designed to take advantage of its new printing technology as well as the recent re-release of the Platoon Leader rules.  The new edition contained six loose pages of rules, hole-punched for inclusion in three-ringed binders.  The rules are in color and are attractive.

The other components are less attractive.  The original set of overlays was reduced, keeping two overlays but putting the others on a new but derivative geoboard, s11.  The overlay sheet included in the copy used to evaluate this product was miscut, cutting off part of the rightmost hexrow of the village overlay.  More importantly, the building graphics on the overlay are messed up (a problem it shares with all of the “Sweet 16″ geoboards Critical Hit created at the same time).  Essentially, buildings that are lined up exactly horizontally or vertically are fine, but any building lined up at some other angle (which occurs quite frequently) appears with crude jagged/pixelated graphics that are quite ugly.

The same problem affects the geoboard, too, although it matters less because it only affects three small one-hex buildings.  However, the geoboard has its own problems.  First, it is neither mounted nor printed on cardboard like ASLSK-style maps.  Rather, it is printed on two sheets of thick paper/light cardstock (of the same density that official overlay sheets use) with a white trim around them.  So, before the maps can even be used, players must assemble them by cutting them out with scissors or a rotary cutter, just as if they were overlays.

To make matters worse, the map is not the right-size.  Measured along their long edge, they are fine.  However, measured along their narrow edge, the map is 1/8” too short, meaning that the narrow sides of the geoboard will not line up correctly with other geoboards.  The only saving grace is that, for this particular product, the board is not required to line up that way.  Players may be confused by the board diagram in the rules, which calls for boards x6 and x12.  This is an implicit attempt by Critical Hit to get players to buy the Sweet 16 Geo Board Collection, which is a set of Critical Hit geoboards that mimic official geoboards 1-16.  However, there is no reason to purchase that product (which in any case comes with a Desperation Morale CONSUMER ALERT warning); regular boards 6 and 12 will do just fine.  In fact, those boards, not the faux boards, are what the product was actually playtested on. 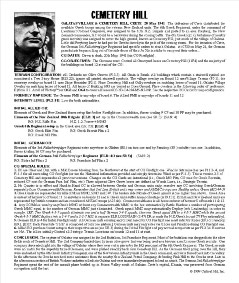