With this issue, full of interesting stuff, the quality level of Critical Hit Magazine began to improve after a considerable period in the doldrums (probably not coincidentally, the totally failed attempt to publish the magazine quarterly was abandoned).

The articles focus strongly on scenario and designers’ notes–consciously taking an approach more similar to the third party ASL magazine Schwerpunkt–and this was probably a smart idea.  These improvements represent the efforts of Bob Gray and, increasingly, Dave Lamb to increase the quality of the magazine.

The issue has more than twice the number of scenarios most recent issues had had, and three of them take place on an attractive historical map, dubbed K2, representing part of the Kursk battlefield.  The edges of this map were configured so that they would be compatible with the edges of geomorphic ASL mapboards, leading to all sorts of interesting possibilities (of which, alas, no one ever took advantage).

Also included is a small countersheet with AFV and airplane counters, as well as two Platoon Leader campaign games, one for Hell’s Bridgehead (using the new map), HB CGIII, and the other depicting a Dutch-Japanese battle in Sumatra in 1942, PL J1 (Capturing the Palembang Oilfields).

The scenarios include one, CH152 (Tin Pan Hill), that uses the Uncommon Valor (Iwo Jima) historical map to represent the rocky terrain around Sevastapol.  They include other scenarios, HB7 (High Tide) and HB8 (The Woodsmen) using the included Kursk map, as well as a Tunisia scenario, CH146 (Message for Ike) using the G1 non-geomorphic generic map included in the previous issue of the magazine, a DASL scenario (CH156 [Hill 150]), and two scenarios that use the Jerusalem map that came with the Genesis ’48 module.

It also includes several re-issues of older scenarios.  Interesting scenarios in this issue include CH145 (The Ides of March), CH149 (Final Embrace), and CH154 (The Central Rail Station).   One meaty scenario that many have enjoyed is HB8 (The Woodsman), which is well suited for three players.

Overall, this issue was a very pleasant surprise when compared with the issues released over the previous several years.

2nd Edition (2014 reprint) comments;  In 2014, Critical Hit released a reprint edition of Volume 6, Number 4, which however is different from the original in several respects.  First, the reprint edition includes no countersheet.  Second, the K2 map was replaced by a new version of the map, now dubbed Psel 2, which is no longer a single mapsheet, but is formed by 4 12″ x 18″ heavy paper/light cardstock glossy map panels, which must be mated together to form the map area.  That can be irritating, but the new map artwork is better than the old, and the colors are more vibrant (though the glossy finish reflects glare).  Excess area was not cut off the map panels; instead, the blank space was filled by things such as a turn track, dead pools and, filling up most of the space, a reproduction of Norwegian ASler Ole Bøe’s “IIFT (M) QRDC 3.6,” a handy reference card.  It is labeled on the map “Public Domain Download,” which suggests Bøe’s permission for reproduction was not sought.  The hexes on the new map are now larger than standard ASL hexes, which means the new map can no longer serve as a quasi-geomorphic map, as the original was intended to be able to do.

The reprint includes Ch144-CH160, HB7-HB8, TB9 and GWASL1.  It is missing the Genesis scenarios as well as (inexplicably) both campaign games.  It adds a World War I “teaser” scenario, GWASL1 (Teufelhünden) which originally appeared in Stalin’s Fury.

The new map artwork does not make up for the loss of the two campaign games, so the original edition is preferred to the 201 edition, especially as the latter was priced at $49.95. 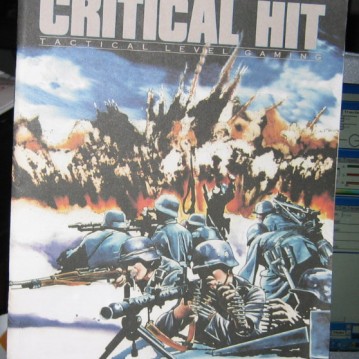