1st Edition Comments:  The French–or at least some of them–come to ASL with this module.  It also comes with a pair of useful boards and a variety of building overlays.  It is par for the course for the smaller core modules in terms of its components, and has better scenarios than many of the other core modules (including the classic Le Herisson).  It does have a few quirks; for example, the number values on the French leader counters are  in a different font than those in all other ASL modules.

2nd Edition Comments:  Oh what a difference a day makes! Or, rather, what a difference 28 years make. The second edition of Croix de Guerre, published by MMP in early 2020, is much larger and wildly different than the first edition–as illustrated by its huge $180.00 sticker price.

The original CdG always seemed to be a bit of an afterthought for Avalon Hill, something they were not really that interested in, compared to the other nationalities. While CdG certainly had no end of armor and gun detail, as per usual for ASL, its treatment of the French forces themselves was really rather cursory–they couldn’t even be bothered to have leader counter factors in the correct font. Moreover, the variegated and rich history of the French armed forces in World War II was given short shrift, despite the nation having effectively three separate armies during the war: the original French Army, the Vichy armed forces, and the Free French, who eventually numbered around a million people in arms.  Then, too, there are the French colonial troops, the French Foreign Legion, the FFI (French Forces of the Interior, or maquis/partisans), and the Milice française, the paramilitary units used to combat the maquis.  The Free French did not even get a French color scheme; instead, ASLers were directed to use British counters for them (even though the British never armed more than a fraction of the Free French forces).

Many, though not quite all, of the shortcomings of the original CdG were addressed in the expansive remake, as will be discussed below.  But 2nd Edition CdG is also different from the original in that an entire France 1940 HASL was included in the module in addition to the standard core module contents. Thus CdG not only provides the French OB but also a historical module featuring the French.

So how does the Second Edition treat the French?  First, the basic French rules apply to the French Army and the Vichy French, as before.  However, there are now separate countersets for the 1939-1940 French Army and the armed forces of Vichy France–at least for Infantry/SW (they share the same armor and guns).  The Vichy forces, befitting their status as collaborators, now have their own two-toned counterset, with German blue on the outside and French blue on the inside.

The Free French now appear as a third French (infantry) counterset.  Their units are in French blue but have a white Cross of Lorraine in the upper left corner.  This is all to the good.  However, the 2nd Edition Free French are still prisoner to their 1st Edition forebears.  The squads are still just blue-colored British squads, which is a little odd considering most Free French forces were armed by the Americans. Their OBA is also treated as British OBA–again, something that doesn’t quite fit with the reality of the historical situation. However, MMP presumably did not want to make past scenarios featuring the Free French (few though they are) obsolete.

Free French vehicles and guns are obviously going to have to be added in a future ASL product.  For context, it may be worth quickly visiting the composition of Free French forces.  The early Free French forces were formed (and armed) under British guidance.  At their height, these forces comprised about two divisions–and they continued to use their British armament (mostly) even later in the war.  The bulk of the Free French forces were armed by the Americans, who provided them with SW, Guns, and Vehicles.  However, the French desired to expand their armed forces still further, leading to conflicts with the Americans, who eventually refused to arm any more units.  Thus the later units raised by the French had a real mix of weapons, including old French weapons, some captured German and Italian weapons, and some Allied weapons.  Ideally, all of these would be represented in ASL in Free French colors so that the Free French can finally get their due.  As is, they basically get half their due in CdG 2nd Ed.  Of course, half a loaf is better than none.

Another significant aspect of the Free French is also left out of CdG 2nd Edition: the incorporation of the maquis and metropolitan French into the Army during and after liberation.  As the Free French liberated southern France, partisan units flocked to their banner, and some essentially attached themselves to French units, becoming extra battalions of undisciplined, irregular troops.  Later, French partisans en masse were mobilized into the French Army along with other Frenchmen from metropolitan France and used both to form some new units as well as, controversially, to replace some African troops in 1944 in what was known as the “Great Whitening” (blanchiment). These units formed from maquis were less disciplined and effective than the soldiers they replaced.

It also comes with a whopping 11 full countersheets:

The countersheets are die-cut very finely and it is easy to accidentally pop counters out from their trees, so be careful.

CdG 2nd Edition also comes with two unmounted geoboards–boards 42 and 43–that originally appeared in Action Pack #1 and were much later reprinted in Action Pack #3: Few Returned, two products that won’t themselves be reprinted in the future. They are basically included here just to keep them in print; only 3 of the 41 scenarios in the product use either map.

What CdG 2nd Edition doesn’t come with are any of the overlays that appeared in the original. They, and other overlays are slated to appear in an upcoming ASL “overlay pack.”

The “bonus” included with CdG 2nd Ed is a complete historical module, Dinant: Rommel at the Meuse, designed by longtime ASLer Dan Dolan.  It depicts Rommel’s hard-fought but successful combat crossing of the Meuse River in May 1940, creating one of the bridgeheads over the Meuse that would spell doom for the French Army. As such, it is an odd duck, featuring a great many AFVs as well as a major river crossing effort.

Dinant uses two 22″ x 34″ historical maps, printed on semi-gloss paper with standard-sized hexes (i.e., smaller than the hexes in Red Barricades and a number of other historical modules).  The maps, which are placed side to side, feature (from east to west), a 9-11 hex sliver of land on the east bank of the Meuse River (including the dense and constricted Dinant itself), the Meuse River itself (generally 2-3 hexes wide), the narrow and constricted villages on the west bank of the Meuse, and the large and fairly open heights (usually bounded by cliffs) further west.  With all the urban terrain and the river itself, the eastern part of the map area is crowded and congested, while the terrain opens up considerably as it rises to the west. Levels range from -1 to 5.

The maps themselves are attractive and well-done (and considerably lighter and more playable than the playtest maps that many ASLers might have seen at various ASL tournaments), although the hex-size may irritate some. The maps have interesting features, including river features such as a Weir, locks and a destroyed bridge, as well as a cathedral, a tennis court, and a medieval fortress. There are also stables for riding and greenhouses for growing pot. In addition, there are numerous railroads and ubiquitous narrow street–so throw narrow railroads into that mix as well.

There are also pages of complicated rules dedicated to pontoon bridges, ferries and other river crossing impedimenta. This is not a historical module for the beginner or the faint of heart. There are also many rules related to the presence of Rommel himself (who gets a counter), which may be a little more interesting.

Of course, most of the rules are dedicated to the (single) campaign game, Fateful Miscalculations, which is 5 scenarios long and pits Rommel’s 7th Panzer Division against the French 18th Infantry Division. The campaign game begins with the Germans on the east side of the Meuse and the French on the west.  The Germans have to make a forced river crossing, withstand French counterattacks, and achieve a breakthrough. Because of the nature of the fighting–across a river–supply line effects have to be taken into account in a way not present in most ASL products.

Because the German force is an armored division, they have a wealth of purchase options to keep the happy. The French have fewer options at their disposal, but can purchase some AFVs at least. A key rule in the module, though, will force ASLers to rethink how they use these units:  under most circumstances, AFVs cannot enter enemy occupied hexes (so no AFV freeze)

Your humble author perused various playtests of this module over the years at Winter Offensive and noticed that there was a lot of unit congestion.

Dinant comes with its own scenarios as well as the campaign game. There are two scenarios that use geoboards and eight that use the historical maps. One geoboard scenario, DN1 (Prelude: Chabrehez) features the delaying actions of the Belgian Chasseurs d’Ardennais (almost the only Belgian unit ever represented in ASL scenarios) against the German drive to through the Ardennes to the Meuse. The other geoboard scenario, taking place at the action, is DN10 (Finale: Onhaye), a six-full-geoboard behemoth. It features 23 German squads, 3 guns, and 21 AFVs, plus ole Rommel hisself, attacking French forces with infantry, guns, and AFVs (much of which is determined randomly, so the French will effectively have a different OB with each playing of the scenario).

Of the eight Dinant map scenarios:

The fact that half of the Dinant map scenarios use Night rules will certainly be a turnoff for some.

Overall, the 2nd Edition of Croix de Guerre is a distinct improvement on the original, with a lot more scenarios and a partial–but not complete–resolution of the Free French problem.  The Dinant HASL adds more value, although its subject matter (a congested forced river crossing) may not appeal to all. 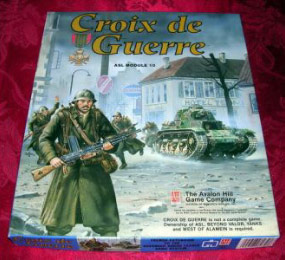