Contents:
Desperation Morale has not examined this product and cannot confirm claims of its contents. This product seems to include 5 unmounted 11" x 16" geoboards (G30-G34),  8 scenarios, and 2 pages rules.

Fort Lahtzanit is an expansion of Critical Hit’s Genesis III product on the Arab-Israeli Wars, which was designed as the anchor for a whole series of products related to the Arab-Israeli conflict.  This product provides materials related to the 1973 “Yom Kippur” war between Israel and (primarily) Egypt and Syria.  Specifically, it features fighting along the so-called “Bar Lev” line along the Suez Canal between Israeli and Egyptian forces.

Fort L provides a small amount of rules, but primarily it adds counters, scenarios and boards to the Genesis III series.  The boards, given the historical situation, are very canal-oriented.

The eight scenarios are all large in size, both in terms of units and, often, map area.  For example, BAR-LEV 2 (Fort Lahtzanit), which is not a monster-sized scenario (in terms of units) actually uses 15 geoboards.  BAR-LEV 7 (‘Bren’ Versus Bear), which is a very large scenario, also uses 15 geoboards. The Egyptians in this scenario, in addition to all their other vehicles, have 22 T-62s alone (the SSRs say simply “use other AFV counters to depict the additional T-62A AFVs”).

At the same time as this product was released, Critical Hit also released–for separate purchase–a set of so-called “Hot Hex” maps, which appear to be the boards of Fort L each doubled in size. 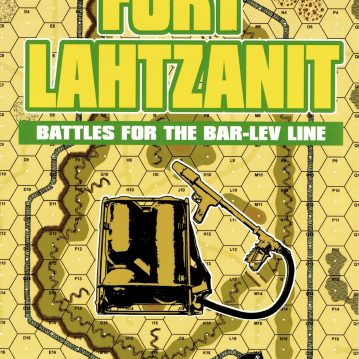