Alternative Titles/Edition History:
The 1st Edition of this product was Genesis '48 (2001). This product was expanded and split into two new products in 2011:  Genesis II and Jerusalem '48. In 2018, new editions of each of those were printed. See the Jerusalem entry for that product; Genesis III (2018) is described here.

3rd Edition (Genesis III) Contents:  This product has not been examined by Desperation Morale, which cannot confirm its claimed contents.  7 unmounted 11" x 16" geoboards  (G1-G7), 14 scenarios (G3-1 to G3-14), 28 pages of rules, 1 page charts, 4 countersheets (according to Critical Hit website; one purchaser has claimed it contains 7 sheets).

Genesis II is a sort of mutant new edition of the 2001 release Genesis ’48, a historical module that looked at the 1948 Arab-Israeli Wars and the Battle for Jerusalem. However, Genesis II, despite its name, is so different from its predecessor that it cannot really be considered a second edition and really needs its own entry.

The main reason that it is different is that it excises the Jerusalem historical map and campaign game from the original Genesis ’48. In its place, Genesis II includes a geomorphic map, additional scenarios, additional counters, and more vehicle notes. Much of this new material, moreover, is not related to the 1948 conflict but to later Arab-Israeli Wars. As a result, though it reprints the geomorphic map scenarios from Genesis ’48, it really is a very different product from its predecessor. Allegedly, the Jerusalem materials will later be published on their own, and other products will be published that will take advantage of and expand the post-48 weapons and counters. [2020 Update: The Jerusalem materials were reprinted shortly thereafter, as Jerusalem ’48, but it would not be until 2018 that a range of other products related to this one were published.]

The geomorphic map (one of several geomorphic mapboards Critical Hit released in 2011), KB1, depicts a kibbutz (the map name suggests there will be a series of kibbutz maps, which is fairly unlikely), essentially replacing a kibbutz overlay from Genesis ’48. Designers might be able to use the map to represent other community-living situations, such as prisoner of war camps or certain state farms. The map artwork is not remarkable, with “stamped” woods terrain (i.e., the same one or two woods graphics showing up in hex after hex) and “gloopy” fields that have somewhat amoeba-like graphics.

Unfortunately, the geomorphic map was one of a number of geoboards designed and printed by Critical Hit in late 2011 that suffered from problems. Some of the boards were not cut to the correct size, while seemingly all of the boards suffered from a slightly undersized hexgrid, which means that the boards typically will not properly line up against official mapboards. This was a problem that should have been detected and prevented. It certainly detracts from any value the geoboard might otherwise have brought to the product.

Genesis II comes with a ton of counters, even if one does not consider the duplicate set that Critical Hit typically throws into its products now (printing two sets of identical counters is cheaper than printing fewer numbers of more different countersheets). Genesis ’48, released in 2001, used the standard Critical Hit vehicle and gun artwork of that time, which was, to say the least, atrocious. Critical Hit felt that it had to develop that alternative counter artwork in order to avoid copyright actions by MMP over a duplicate “look and feel.” Unfortunately, little thought was put into clarity or user friendliness, with the result that the new artwork–which Critical Hit used for years–was almost incomprehensible. Players typically always had to keep a cheat sheet at their side, especially because they would only occasionally use Critical Hit counters. Moreover, in 2001, even Critical Hit’s MMC counters were atrocious, typically portraying three identical figures in a way that made the counters seem static and ugly (Avalon Hill tried that with GI: Anvil of Victory and quickly gave it up). With Genesis ’48, the counters were also on a thick cardboard and were not that well die-cut.

Genesis II, in contrast, utilizes the newer style of counter artwork that Critical Hit developed in the late 2000s, after seeing some of its third party competitors utilize the same strategy. This new artwork, for guns and vehicles, utilizes a layout very similar to that of “official” ASL counters, so they are in fact understandable and playable, but eliminates any confusion with official counters primarily by including a large CH in the corner of each counter. The SMC/MMC counter artwork is also new, and again represents an improvement over the 2001 era. There are other improvements as well. In Genesis ’48, for example, the Israelis, rather perversely used the same color counter as the Germans. In Genesis II, they get their own color, a sort of olive (.

However, regardless of the color, what is on the counters is substantially the same. As a result, like its predecessor, Genesis II has Israelis with a huge number of new squad types. The Israeli OOB includes 7-4-8s, 6-4-8s, 6-3-8s, 5-5-8s, 4-5-7s, 4-4-7s, 4-3-6s, and 4-2-7s. Moreover, the Israelis are still generously endowed with special abilities, including a limited free deployment capability, 20% initial deployment limit, free recombination, tank hunter heroes (though thankfully the rules for them are slimmed down from Genesis ’48), increased broken side morale, no cowering for Elite/1st Line squads, extra powers during Night scenarios, and more. This is consistent with the noticeably Israeli-centric nature of the product.

The counter-mix includes more AFVs/Guns that appeared in Genesis ’48, including a sprinkling of 1967-era AFVs and guns. Other counters, however, were scrapped, because those vehicles/guns did not actually see combat. In addition, changes were made to the values of some of the counters that appeared in Genesis ’48. Were all these changes adequately proofread? The rulebook makes one wonder, because it explicitly warns players that changes were made in many of the counters and that “in the event of any variance between the die-cut counters and the vehicle and ordnance listings, the data on the counters takes precedence.” Some of the counters seem to be more for marketing purposes than anything else. The rulebook states that “The intent of Genesis II was to provide a teaser batch of rules and counters from [the ’67/’73 wars] in hopes that players will want to come back for more.”

The scenarios, 22 in whole, consist mostly of the previously released scenarios from Genesis ’48 (and an issue of Critical Hit magazine designed to accompany that product), plus a handful of new scenarios designed by Ray Tapio. No playtesters are listed for these scenarios. Some of the previously released scenarios appear in updated versions, to correct rules or balance issues in the original. Of the scenarios, 13 focus on the 1948 conflict, 1 takes place in 1950 and represents a border skirmish, 4 scenarios take place in the 1956 war, 3 scenarios are set in the 1967 war, and 1 scenario is set along the Bar-Lev line in 1973. The 1956 scenarios stretch the time frame that ASL was designed to represent, and the 1967 and 1973 scenarios go well past that demarcation line. ASL was not designed to simulate conflicts from the 1960s and 1970s.

At present, Genesis II, along with its predecessor Genesis ’48, represent the only way for ASL players to simulate the Arab-Israeli conflicts. With the better counters, Genesis II is probably a step up from the original (except for fans of campaign games and historical maps). As a result, people interested in the 1948 Arab-Israeli war will probably want to obtain this product. For others, it may be a bit too esoteric.

There is one final issue. The price of Genesis II, listed at $149.95, is grotesquely overpriced. It is priced about three times as high as it should be. This is a module that is basically a partial reprint, with no historical maps, yet the price tag makes it, as of its printing, the highest price ASL item in ASL history. No player should pay $150 for this module. It isn’t worth it.

In 2018, Critical Hit released a new version of its “Genesis” product, this time as part of a series of related products all dealing with various Arab-Israeli wars. You can view all of the products in this series by clicking on this tag.

Genesis III appears to contain the same (or very similar) rules as Genesis II, but has fewer scenarios. In part, this is because some of the contents of Genesis II were split off to help form another module, just as the Jerusalem materials were earlier split off and did not appear in Genesis II.  Whereas Genesis II contained 22 scenarios, Genesis III contains only 14 scenarios (all of which appeared in Genesis II, though the new versions are different because of the new boards; see below). Half of the scenarios are set during the 1948-49 Arab-Israeli War, while three are set in 1956, three more in 1967, and one in 1973.

The scenarios of Genesis II used standard official geoboards; these have been abandoned by Critical Hit in favor of its own included 11″ x 16″ unmounted geoboards, of which there are 7 in the module. The artwork on the boards (all of which are desert-oriented) is acceptable but not stellar. It is not clear that all–or any–of the scenarios were replaytested for the new boards.  In one scenario, Critical Hit seems to have forgotten to substitute one of the old boards, leaving it on the scenario card.

[A minor aside: One reason Critical Hit moved to using its own 11″ x 16″ geoboards, other than the fact that it gave CH an excuse to reprint its old products using them, is because of Desperation Morale, which criticized the inability of Critical Hit to print 8″ x 22″ unmounted geoboards that would correctly line up with official unmounted geoboards.  In the marketing copy for Genesis III, Critical Hit claims that “when some doyenne squeaked up about the edges of these boards hexes and an inability to mate (pun intended), well, that was the start of a quest to create all new, all our own, maps and boards.”  That doyenne was Your Humble Author. Incidentally, a “doyenne” is “a woman who is the most respected or prominent person in a particular field,” so Critical Hit was feeling particularly catty that day.]

Genesis III also contains a lot of counters, most of them aimed at the 1948-49 Arab-Israeli War, but with some others thrown in as well. The counters are generally well done.

Note: At the time Genesis III was released, Critical Hit also released–for separate purchase–a set of so-called “HotHex” maps, which are apparently larger-hex versions of the original boards. Critical Hit describes them thusly: “each map found in the module is provided as a 22″ x 34″ set of 4 linking boards.” This would make the hexes essentially double-sized. 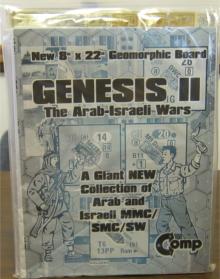