Along with Guerra Civil and Dien Bien Phu, Genesis ’48 (G48) was one of three historical modules released by Critical Hit early in the 21st century which were designed to have much more depth and better quality components than its earlier historical modules.   Certainly G48, whose own genesis was very long in the making (far too long for some who preordered it), could deliver the goods in terms of components.  A large and quite striking historical map, numerous countersheets, a lengthy rulebook–Critical Hit did not stint in any respect (for many purchasers, Critical Hit even included a “free” extra set of counters which were actually misprints in which the fronts were printed on the backs of the countersheet and vice versa).

Like Guerra Civil, G48 is obviously a labor of love by designer Bob O’Connor, although unlike the former product, G48 displays more obviously the drawbacks of a labor of love as well as the advantages.  It centers on the fighting for Jersusalem during first Arab-Israeli War in 1948, although some of the scenarios take the fighting outside of Jerusalem (indeed, as far afield as the Sinai in 1956).  One of the most interesting aspects of this fighting, well represented in G48, was the hodgepodge nature of the equipment that all combatants used, scrounging, purchasing and stealing AFVs from battlefields, junkyards, and arsenals from all over.   G48 provides an incredible wealth of detail on AFVs and guns in the conflict, fully as interesting as anything in Chapter H (this is one of the positive aspects of a “labor of love”).  Unfortunately, the extremely poor and non-intuitive Critical Hit AFV counter layout doesn’t make the module more playable.

The “labor of love” drawbacks make themselves felt primarily through a presence of too much detail.  This overabundance of chrome can be seen, for example, with the rules for Israeli “Molotov Tank Hunting Heroes,” which take up almost an entire page.  However, these rules mostly seem to duplicate the existing tank hunter hero rules; it would have been much simpler to have given the Israelis tank hunter hero capability as if they were Japanese.  The “overchrome” can also be seen in the plethora of new squad types.  Not contented with the many different combinations of squad values that already exist in ASL, the designer introduced new types, including 6-3-8s and 4-2-7s.   There are also a host of special rules for each type of Israeli troop (Haganah, Palmach, HIM, Irgun, etc.), although an included play aid helps in that regard.  Perversely, the Israelis have counters that are the same color as German counters in ASL.  For the Arab forces, one must pull out a number of counter-trays–Syrians and Lebanese primarily use French counters; Iraqis, Egyptians, and the Transjordanian Arab Legion use British counters; Palestinian militia and irregular forces use Italian counters; and 1956 Egyptians use Russian counters.

Only 2 of the 15 scenarios use the historical map; the others use geomorphic maps.  This has been a source of complaint.  On the other hand, still others have complained about the map itself, saying that it is too detailed and hard to understand.  There is some merit to these complaints; a little bit more abstraction (both in building detail and in the number of elevation levels) would have gone a long way.  Also, the map would have profited by larger hexes.  Of the geomorphic map scenarios, several use desert rules, but most do not.  Most of the scenarios are moderately sized, with a couple of large scenarios thrown in.

The Platoon Leader campaign game (“O Jerusalem”), uses the Jerusalem map and features the Arab assault on and capture of Jerusalem in May 1948.  It is 6 campaign dates long.

For ASLers interested in the Arab-Israeli conflict, this is basically their only option.  Luckily, though not as streamlined as it could be, it is not a bad one (although it is not as strong a product as either Guerra Civil or Dien Bien Phu).

In 2011, Critical Hit published Genesis II:  The Arab-Israeli Wars, which was in part a reprint of Genesis ’48.  However, it was so different (not including a historical map, for example, while including a geomorphic map), it is considered in this compendium a separate product and has its own entry.

2nd Edition (Jerusalem ’48) Comments:  In 2014, Critical Hit re-worked and re-printed the remaining parts of Genesis ’48 as Jerusalem ’48, which, as it contains the historical map, is considered here as the true successor to Genesis ’48.  However, it is important to know that GENESIS II is REQUIRED to play this module (of course, Platoon Leader is also required for the campaign game.  The counters and most of the rules appear in the other module (split apart possibly in order to get extra profit).  This is noted on the Critical Hit website but NOT on the product cover for Jerusalem ’48.

Essentially, Jerusalem ’48 consists of re-worked versions of the historical map, historical map scenarios and historical map campaign game from Genesis ’48.  The rules detail only the terrain of the Old Jerusalem map and the campaign game, CG-I (O Jerusalem!).  Thanks apparently to new printing equipment acquired by Critical Hit, the rules appear in a much nicer, two-color format.  The scenarios, too, are printed with color and in a higher quality than the original.  The problem, of course, is that the original Genesis ’48 contained only 2 historical map scenarios (along with many other geoboard scenarios).  Jerusalem ’48 doesn’t expand on the number much, only adding 2 scenarios originally printed in Critical Hit Magazine, so it comes with a paltry 4 scenarios.

The map in Jerusalem ’48 is substantially different, physically, from the original map.  Instead of one large paper map, Jerusalem ’48 comes with 4 map panels, each printed on 12″ x 18″ heavy paper/light cardstock (of the same thickness that official overlay sheets are printed on).  The four map panels, slightly overlapping, mate to form the Old Jerusalem map.  The advantages are a certain sturdiness and much brighter colors that “pop” more so than the color on older maps.  The disadvantages include reflection glare from the glossy finish and the need to position and keep in place 4 separate maps (more than 4 and it begins to become impractical).  The map graphics appear to be the same, slightly enlarged, and with a somewhat different color palette.  In particular, the elevation level colors have been substantially changed at the higher elevations.  It is not clear why this was done, but the colors chosen are all shades of beige/khaki/light brown and are often difficult to distinguish from each other.  As a result, some ASLers may prefer the original map and some may prefer the newer version.

One thing is for certain:  Jerusalem ’48 is highly overpriced.  It costs $59.95 for the equivalent of a single map, 4 scenarios, and a few pages of rules (and one must own Genesis II as well).  A more appropriate price would be around $24.

Jerusalem: Siege is an expansion of Critical Hit’s Genesis III product on the Arab-Israeli Wars, which was designed as the anchor for a whole series of products related to the Arab-Israeli conflict.  This product provides materials related to fighting around Jerusalem in both the 1948-49 Arab-Israeli War as well as the 1967 “Six Day” War. Genesis III and Magach 73 are required to play this product. Critical Hit marketing text is ambiguous about whether Invasion Palestine! is also required for play.

The main feature of Jerusalem: Siege, as with previous editions of this product, is the map of Jerusalem’s old town. The original map work has been re-done, which may improve what was already an interesting map. The map itself, for some reason, was printed twice the size normal Critical Hit maps are, apparently to increase interest. The map must be assembled from 8 glossy 12″ x 18″ heavy paper/light cardstock map panels, which can sometimes be a pain.

No counters are included; counters are used from the prerequisite products.  Jerusalem: Siege comes with 9 scenarios (not the 7 scenarios that Critical Hit marketing materials claim), 4 of which are set in 1948-49 and use the Jerusalem map. These are all reprints of old Jerusalem scenarios. Five more scenarios–only one of which uses the Jerusalem map–take place during the 1967 war. The other scenarios use 11″ x 16″ geoboards from other Genesis III series products.

Luckily, Jerusalem: Siege retains the Platoon Leader Campaign Game (many such campaign games do not survive Critical Hit new editions), to which 5 of the 8 pages of rules are dedicated, the other 3 pages being terrain rules.

Desperation Morale noted that the previous edition of this product was expensive for what it contained. This version, which provides a handful of additional scenarios and a double-sized map, but is otherwise basically the same, is considerably more expensive than its predecessor, currently selling for $99.95.

Around the same time as Jerusalem: Siege was released, Critical Hit also released–for separate purchase–an EVEN LARGER version of the Jerusalem map than the double-sized version found in Jerusalem: Siege. This product was dubbed the UBER MONSTER Set. 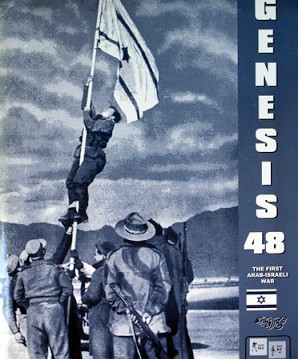