Contents:
Desperation Morale has not examined this product and cannot verify claims of its contents. However, it appears to contain 4 nonstandard 12" x 18" heavy paper/light cardstock geomorphic boards, 1 5/8" half-countersheet (88 counters), and 6 scenarios on cardstock. Critical Hit, however, claims that it comes instead with 1 1/2" countersheet (280 counters).

Freedom’s Price: Hungary 1 is an expensive (at $69.95) map/scenario pack from Critical Hit that provides a mere six scenarios, all of them featuring Hungarian forces on the Eastern Front in World War II (except one that takes place in 1939 and represents a border conflict). It is part of a “Freedom’s Price” series of packs by Critical Hit, each one focusing on a particular minor nation (for the record, Hungary’s “freedom” was not why it went to war).

There is also a Freedom’s Price: Hungary 2.

The product also comes with 4 nonstandard 12″ x 18″ geomorphic maps printed on glossy heavy paper/light cardstock.  Based on other, similar maps, the maps here may not be trimmed precisely, which means that players may not be able simply put maps adjacent to each other but may have to carefully lay one edge on top of another edge.  The boards are generally okay in graphic quality, with the exception of possessing traditional Critical Hit problems in depicting buildings.

Critical Hit claims the product also comes with a sheet of 1/2″ counters (Soviet Infantry/SW), but in fact two separate copies of this product seen by Desperation Morale have come with different, seemingly random countersheets, with no guarantee they will even be relevant to the scenarios. One, for example is a half-sheet of 5/8″ Soviet AFV counters, colored orange, and originally appearing in a Critical Hit “Russian Rarities” pack. 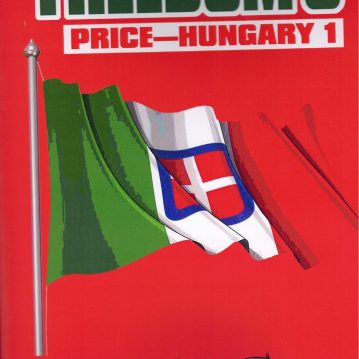