Contents:
Desperation Morale has not examined this product and cannot verify claims of its contents. However, it appears to contain 4 nonstandard 12" x 18" heavy paper/light cardstock geomorphic boards, 1 1/2" countersheet (280 counters), and 6 scenarios on cardstock. Critical Hit, however, claims that it comes instead with 1 5/8" half-countersheet (88 counters),

Freedom’s Price: Hungary 2 is an expensive (at $69.95) map/scenario pack from Critical Hit that provides a mere six scenarios, all of them featuring Hungarian forces on the Eastern Front in World War II. It is part of a “Freedom’s Price” series of packs by Critical Hit, each one focusing on a particular minor nation (for the record, Hungary’s “freedom” was not why it went to war).

There is also, obviously, a Freedom’s Price: Hungary 1.

The product also comes with 4 nonstandard 12″ x 18″ geomorphic maps printed on glossy heavy paper/light cardstock.  The artwork is adequate; one board contains new city building artwork for Critical Hit that does not look bad but which contains very dark/thick shadows that may make it difficult to determine LOS at times.

Half of the scenarios here also require one or more of the geoboards from Freedom’s Price: Hungary 1.  All six of the scenarios are large in size; many feature a large number of vehicles.  Two feature OBA; none use Air Support or Night rules.  Generally speaking, the scenarios have few SSRs.

Critical Hit claims the product also comes with a half-sheet of 5/8″ counters (88 total), but Noble Knight Games, which now inspects the contents of Critical Hit products it receives, reports that it only comes with a full 1/2″ countersheet (280 counters; Soviet Infantry/SW).  That is what Critical Hit claims comes with the other Hungary pack, so it may be possible that some were switched. A copy examined by Desperation Morale contained a sheet of orange-colored Soviet Infantry/SW.  It doesn’t actually matter, as both countersheets are superfluous and not needed. 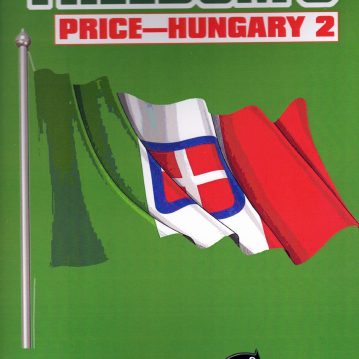