Mike Green Sector is an example of Critical Hit at its most cynical. As of this writing selling for $49.95, it offers only 3 scenarios–and they are not even original.  What Critical Hit did here is the same thing it did for King Red/Green Sectors. It took one of its series of monster Normandy modules–in this case, Juno Beach–lopped off a section of it, printed the map for that section with somewhat enlarged hexes, threw in the couple scenarios from Juno Beach set in that section, then released it as a separate new product.  It’s a virtually effortless way to get people to buy the same products over and over again, a strategy that has been part of Critical Hit’s business module for many years.

So MGS contains a large historical map composed of 9 glossy 12″ x 18″ heavy paper/light cardstock map panels, which have to be assembled to form the map (an irritating chore when there are this many panels).  The map is so large because the hexes are larger than normal (at 1.13″ across, slightly larger than Red Barricades hexes.  Otherwise, it is simply a portion of Juno Beach taken from the Critical Hit module of the same name, using the same artwork.

The rules, too are the Juno Beach rules, even those parts not necessary for play of this module.  Critical Hit describes this as “more rules than you need are presented herein.”  The rules explain the various beach obstacles and fortifications, as well as “Bangalore Torpedoes” and “Tetryl Heroes.” That’s not the same as a Tetrus Hero.

No counters come with this module.

The only possible reason to purchase this product would be as a test of Critical Hit’s Normandy series of modules, without spending the full (high) price for one of those monster-sized modules. Still, by any measure, fifty bucks is still a lot to pay for only three scenarios. ASLers can safely pass on this. 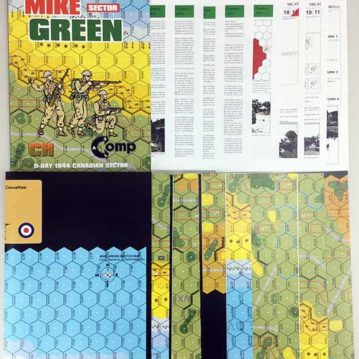