Contents:
Desperation Morale has not examined this product and cannot confirm claims as to its contents. However, it appears to have a historical map consisting of 20 or 24 glossy 12" x 18" heavy paper/light cardstock map panels, 5 1/2" countersheets (1,400 counters) and 3 5/8" countersheets (528 counters) for 1,928 counters total (may also contain additional counters), 10 scenarios, 10 rules pages, landing craft play aids, and, allegedly, a campaign game.

Juno Beach, released in 2018, is one of the major entries in Critical Hit’s series of products attempting to portray the entire D-Day landings at Normandy at squad level. It depicts the entire Canadian landing at Normandy using a giant historical map that is up to 16 feet long.

The map is composed of 20 or 24 (accounts vary) glossy 12″ x 18″ heavy paper/light cardstock map panels, which must be painstakingly assembled to form the huge landing area. To get so many map panels positioned just right is a royal pain in the moose, but most of the scenarios take place on only a small portion of the map.

Juno also comes with a passle of countersheets, most of which were previously published in its sister modules Gold and Sword.  Accounts unfortunately vary between Critical Hit, retailers, and purchasers as to exactly how many countersheets and of what type come with the module, but regardless of the exact amount, it’s a lot.  Most, of course, just duplicate official ASL counters.  Critical Hit states that the German counters come in a nonstandard “Feldgrau” color (or, to be more accurate, what Critical Hit seems to think is Feldgrau), while the Canadian counters come in a “Khaki” color which apparently is not the same as the standard British color.

One can hit the beach with the 10 scenarios provided. Interestingly enough, Critical Hit includes no monster-sized historical scenario representing the entire action, which has been a staple of recent Critical Hit historical modules.  That may be because Critical Hit used those monster scenarios as substitutes for actual campaign games, which it largely abandoned creating.  However, with Juno Beach, Critical Hit actually includes a campaign game, according to its marketing copy.  It does not specify what sort of campaign game, but one presumes that it is mostly likely to be a Platoon Leader campaign game, given that Juno comes with relatively few rules pages.  Critical Hit claims that players will need extra countersets, whether purchased separately or borrowed from Gold or Sword, to play the campaign game, so it must be large indeed.

Almost all of the Juno Beach scenarios are large or very large in size.

Around the same time Critical Hit released Juno, it also released–for separate purchase, a “Monster Map Set” version of the Juno maps with larger hexes (probably 1.8″ or so across).  This map set alone costs $179.95, as of this writing, and is probably pretty impractical. 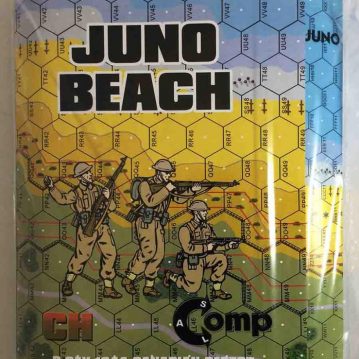