In 2002, ASL third party publisher Heat of Battle released the first “monster-sized” historical module, Onslaught to Orsha, which was in most respects considerably larger than any previous official or unofficial historical module for ASL, featuring a large map, many scenarios, and a lot more as well.  Moreover, it was designed by Chas Smith, whose previous scenarios in the Hell on Wheels pack and ASL Journal Issue Two were quite popular.  With its East Front theme, Orsha quickly became a popular (and eventually much sought after) ASL product.

Nearly a generation later, Orsha has once more been onslaughted, with a new and expanded edition of the original module, this time published by Bounding Fire Productions, Chas Smith’s own third party publishing company.  Because of the different publishers for each edition, and because this second edition differs in several substantial respects from the original, Onslaught to Orsha 2 appears here with its own dedicated write-up rather than having a writeup appended to the original product.

However, this write-up assumes that the reader has previously read the Desperation Morale write-up of the first edition of Onslaught to Orsha, so if you have not done that yet, do it now.  We will wait.  This write-up is not going to rehash at length things already explained about the module and which have not changed in the second.  Unfortunately, there are no second edition designers notes with Onslaught to Orsha 2 to explain some of the design decisions made for the second edition, which would have been nice (especially as one of the decisions is rather puzzling).

OtO depicts fighting near Orsha during Operation Bagration, i.e., the 1944 Soviet summer offensive that destroyed the German Army Group Center. The core to OtO, in whatever version, is its historical map–a very long, rectangular map with generously large hexes, depicting an East Front railway and the terrain to either side of it. The original Orsha map had okay graphics (reasonable for 2002, somewhat dated in 2020) but was printed on one long, too-hard-to-manage sheet of paper.  The revised Orsha map comes in three sections, which is a distinct improvement, although the maps all have a lot of folds, some inconvenient.  The map graphics have also been updated.  While retaining the same basic style (including the distractingly off-kilter brush hexes), they lime green of the original map has been replaced by more muted tones.  The map is not spectacular to look at, but that’s probably more the fault of the terrain than of the map art.

In addition to the historical map, OtO2 comes with something that the original OtO did not:  geoboards.  Although the original OtO featured both historical map scenarios and geoboard scenarios, the geoboards used were official ones.  But OtO2 features four new 8″ x 22″ unmounted geoboards, DW8a and DW8b plus DW9a and DW9b, which are only partially geomorphic.  DW8a and DW8b can be combined to form a larger, “doublewide” board, and DW9a and DW9b do the same thing.  Boards 8a and 8b combine to form a 16″ x 22″ board featuring a two-hex wide river meandering diagonally from the upper right of the board down towards the lower left.  The left bank of the river has a few buildings and a few low hills, but is pretty open.  The east bank of the river features a large but low hill, a few more buildings, and a large number of grain fields. The board set is not very exciting, but the diagonal river is certainly a contribution to ASL geomorphia.

However, here is where the bizarre design decision of OtO2 comes in.  Boards 9a and 9b actually plagiarize 8a and 8b. Essentially they are the exact same boards, only with the river removed.  There is no explanation provided as to why this is the case, but it is strange indeed.  Few ASLers probably want to buy the same boards twice in one product and it is difficult to see why Bounding Fire couldn’t have simply provided one board and two overlays (overlays that would either provide a river or cover one up).  It’s hard not to be disappointed by the fact that 8a/8b simply copies 9a/9b.

The original OtO came with one countersheet, mostly of vehicles. At the time, the countersheet was rather “revolutionary” in that it marked a return to functional third party counters after a period of time in which MMP used copyright claims to bully third party publishers not to include counter artwork.  The OtO counters used recognizable ASL counter formats while maintaining their own look and feel by including a company logo on each counter–something that third party publishers have done ever since.  The 2020 version of OTO comes with three and a half countersheets instead of the one in the original. There’s a half-sheet of mixed 5/8″ and 1/2″ counters (markers, captured German SW in Soviet colors, and German Guns, Vehicles, and Planes), a full sheet of 1/2″ counters with extra Soviet and German Infantry and SW, a full sheet of 5/8″ counters featuring Soviet AFVs and Guns, and various markers, and a full sheet of 5/8″ counters featuring Soviet vehicles and planes, and a small number of German vehicles.  All are handsomely rendered with typical high-quality BFP artwork and production values.

A cursory examination of the reprinted scenarios suggest that the great majority of them are substantially the same as in the original.  A couple of scenarios have slight OB changes to address balance issues in the originals.

The new scenarios focus far less than the reprint scenarios on assaulting fortified lines, though they still tend strongly towards the large and heavy.

Flavor SSRs–i.e., SSRs inserted to impart a special character or flavor to the scenarios (like the pop-up guerrillas in the classic scenario Urban Guerrillas) –are virtually non-existent, which is part for the course for BFP.

OtO2 comes with a lot of rules, all printed on the (unfortunately) thin glossy paper that BFP has consistently stuck with over the years.  Also keeping with BFP tradition is that they are confusingly organized.

First, there is a more or less standard rules chapter for OtO, 28 pages long. Almost all of these deal with the included campaign game, On Track to Orsha, a large but short campaign game. A couple of additional pages cover slopes (ugh) and counterbattery fire (mild ugh).

In addition to these pages, there are another six pages using the exact same chapter header graphics and colors but which are dubbed “Aircraft of Operation Bagration,” providing extensive air rules for those ASLers willing to put up with them.  They start with page 23, so there are actually multiple rules pages with the same page numbers and chapter headers in this product.

Finally, there are 8 pages of scanty Chapter H style gun and vehicle notes for OtO2, with a yellow chapter header but confusingly starting with page 5.

OtO2 also contains the same 2 SASL missions included with the original, a nice nod to the people who love SASL (the solitaire ASL system).

So, there’s a lot here.  However, at $124 for US purchasers, it’s by no means cheap. The questions are, then, is OtO2 worth buying (for new purchasers) and is it worth buying again (for owners of the original OtO2)?

As to the first question, the answer is probably yes. There’s a lot of play value here, including more than 30 scenarios and a campaign game, and most of the scenarios are tried and true, while the newer ones are likely to be just as good.  East Front aficionados will have an additional impetus to get the product. However, it is still definitely not a product for everybody.  Fast-paced, agile scenarios are largely missing here, as are smaller or more tournament-suitable scenarios. There’s a huge emphasis here on smashing fortified lines, of tons of OBA, of big guns and big tanks and large numbers pretty much going right up against each other without necessarily a ton of subtle maneuver.  That’s the sort of ASL that some players love but other players abjure. It’s useful to know which type you are before you make a decision here.

It’s a tougher question as to whether or not previous owners of OtO should get OtO2. The original scenarios and campaign games are largely the same. There are more counters, but these are primarily duplicates of counters you already have. The historical map graphics are slightly better in OtO2 and the map itself is conveniently sliced into three, but it’s still basically the same map.  That basically leaves the 10 new scenarios and the new geoboards, and $124 is a lot to cop up for the equivalent of an Action Pack, especially taking into account the fact that two of the geoboards virtually duplicate the other two geoboards included. Of course some ASLers couldn’t stand not owning a new version of OtO, even if the differences were much less still; it’s that obsessive-compulsiveness that is so strong in the hobby.

But for those without such OCD, or who have to pay closer attention to their wallets, you could probably stick with your original OtO and not miss too much.  The one thing you might consider is trying to pick up the geoboards as spare parts at some point, because Bounding Fire tends to require previously published geoboards to play scenarios in future products (as OtO2 itself demonstrates). 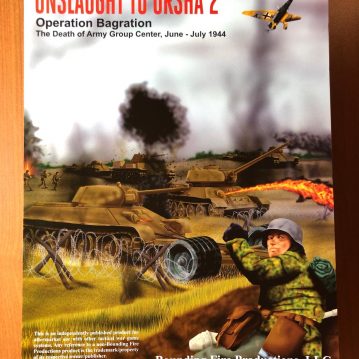