You might be forgiven if you thought a product called Heroes and Knights were an expansion for Settlers of Cataan or Carcassonne, because it has a distinctly “Euro” feel to its title, but in fact we are talking about Rally Point Volume 11:  Heroes and Knights.  The eponymous warriors are actually recipients of Soviet and German military medals:  Heroes of the Soviet Union and the Knights Cross of the Iron Cross.  Rally Point Volume 11 is a themed scenario pack featuring scenarios depicting actions with such medal recipients within them.  Heroes and Knights, unusually, was actually one of two Rally Points released in 2015 (typically, there is only one), the other being Rally Point Volume 10: The Best of Pete Shelling.  Unlike that volume, which featured reprint scenarios, the scenarios of Volume 11 are all originals.

The pack features 6 “Heroes” and 5 “Knights”–one scenario has both.  Unfortunately, two of the “Knights” were very unfortunate selections–Waffen SS officers and convicted war criminals (Jochen Peiper and Kurt Meyer) whose men massacred American and Canadian troops.  Another selection (Hermann Balck) was convicted by the postwar German government for the summary execution of one of his own officers.   Surely of all the Knights Cross winners there were better choices than these?  That’s a rhetorical question:  the answer is yes.  Incidentally, the fourth “Knight,” Erich Bärenfänger, a devoted Nazi, committed suicide in Berlin in 1945.  The fifth recipient represented is Mihail Lascăr, the Romanian general who won his Cross in the Crimea but was captured near Stalingrad the following year while leading surrounded Romanian units in hard fighting.  When Romania switched sides in 1944, it opened up new opportunities for some of its captured officers, including Mihail Lascăr, who became commander of a new Romanian armored division in April 1945 (but did not get into combat before the war ended).  He went on to have a career in the postwar Romanian military, including as minister of defense, but fell out with the Communist government, which then tried him on war crimes charges (for alleged atrocities against Soviet partisans).  However, he was acquitted. He retired in 1950 and died in 1959.

With its particular theme, Rally Point 11 naturally has an East Front focus.  All of the scenarios take place on the Eastern Front except for one France 1940 and one Greece 1941 action.  The actions depicted definitely tend towards the large; there are only a few small and medium-sized actions in the pack.  Much of this is due to the pack being vehicle-heavy in nature.  On average, there are more than 10 vehicles in each scenario in this pack.  Three scenarios have OBA; no scenarios use Air Support or Night Rules.

In Schwerpunkt Volumes 5 and 6, which similarly focused on “medal actions,” the medal recipients were typically featured as heroes or heroic leaders, often with additional (sometimes long) SSR’s to help represent what they historically achieved.  That is definitely not the case here, though.  In only one scenario is there a hero (a heroic leader) and in only one other scenario is there a recipient-related SSR.  Generally, the recipients are simply represented by good leader or armor leader counters.  This may be because some people complained about the SSRs in Schwerpunkts 5 & 6, but possibly for some other reason.

One of the more interesting scenarios in Rally Point 11 is RPT110 (Theirs Not to Reason Why), designed by Mike Augustine.  It is a rare-three player scenario featuring Soviets and, facing them, Romanians and Germans.  Actually, the scenario can be played with two or three players.  In the three-player version, any of the three nationalities can win, though the Romanians and Germans must cooperate in most cases for either to win.  A random DR determines which force Axis force moves first each turn.

Another scenario by Mike Augustine is also interesting, thanks to a flavorful SSR.  RPT108 (Catching the Bear), whose Hero of the Soviet Union is actually a heroine, features sniper Mladshiy Serzhant Tatiana Kostyrin (120 kills), who took over command of a Soviet counterattack after her commander was wounded and led the charge at the German position–a charge in which she perished.  The SSR gives the Soviet player the opportunity to create a 10-2 Soviet leader if one of the existing leaders is wounded or eliminated.  However, doing so would reduce the Soviet SAN.  It is a nice little SSR. 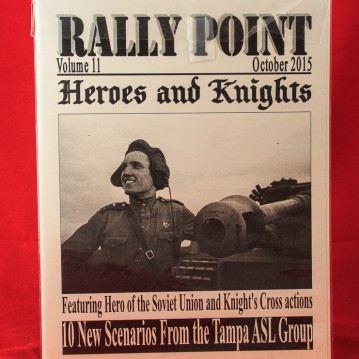