The release of Schwerpunkt Volume 20 at ASLOK 2014 marked a milestone of sorts, if a milestone with an asterisk.  The date marked the 20th issue of Schwerpunkt to be released, though not quite the 20th anniversary, which will occur next year, as Volume 5 and 6 were both released during the same year.  Still, 20 issues of a major ASL publication, each equivalent to a scenario pack, is nothing to sneeze at.

A glance through those 20 issues (or 20 glances, as the case may be) reveals that Schwerpunkt has been nothing if not consistent.  Indeed, unchanging might even be a better word.  Each issue of Schwerpunkt contains one main article and, sometimes, a secondary article, 12 scenarios, and players’ and designers’ notes for those scenarios.  This issue contains just one article, by publisher Evan Sherry, on tank destroyers.  The article combines the history and doctrinal use of American, Soviet, and German tank destroyers along with some tactical tips for their use.

Something that is even more unusual is the typical scenario size.  Only 2 of the 12 scenarios could be considered small in size; the remainder are either medium or large (in basically equal numbers).  In his “words from the editor,” Evan Sherry states that “a change of direction in our scenario designs required even more playtesting than usual.”  This seems to have been a reference to the larger scenarios of Schwerpunkt Volume 20.  Many of the scenarios would simply not be suitable for tournament play.  Four scenarios have OBA (a somewhat high proportion for Schwerpunkt), but no scenarios use Air Support or Night rules.  SSRs are few and far between for most scenarios, with about a third of the scenarios having nothing more than a single SSR denoting the environmental conditions.

Another scenario, SP237 (Shanghai Scuffle), uses the historical map from Valor of the Guards to represent a bit of Shanghai’s riverfront, the first time that Schwerpunkt has ever used a non-geomorphic map.  This is not the only VotG “import.”  The pythonic SP238 (Inherent Systemic Violence) uses 6-2-8 NKVD counters from Valor of the Guards.

Schwerpunkt 20 contains a wealth of interesting scenario situations, including:

Overall, Schwerpunkt Volume 20 is one of the most attractive-looking (in terms of scenarios) to come out in several years.  It is definitely worth a look. 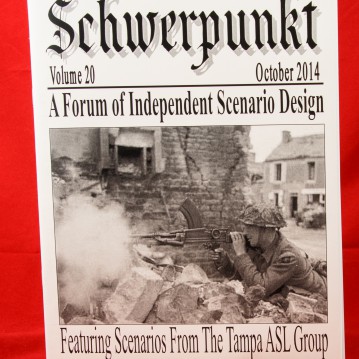